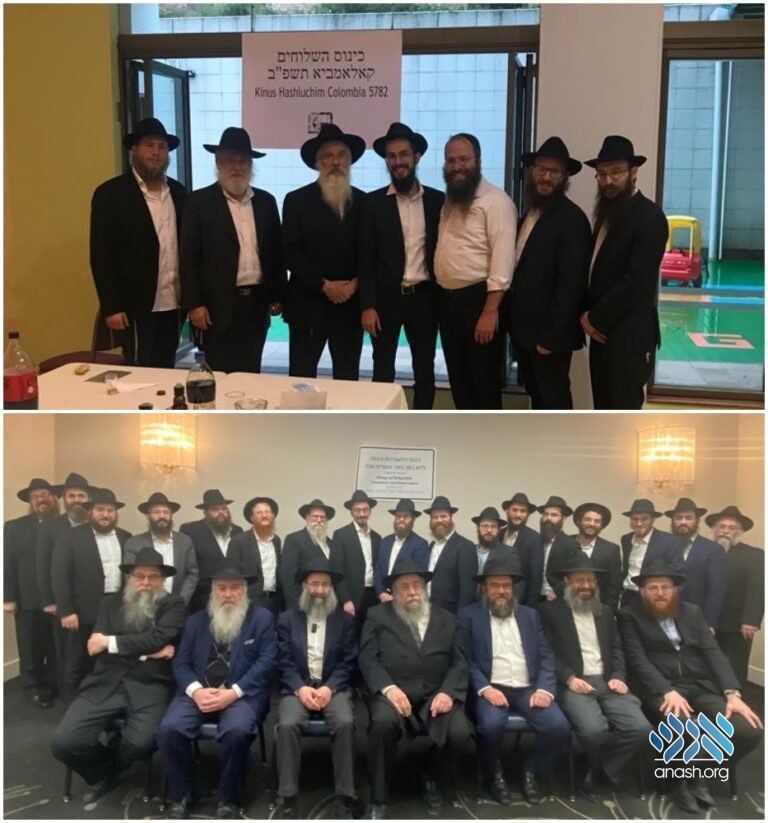 At gatherings held in Colombia, South America, and Stamford, Connecticut, shluchim planned their gifts for the Rebbe’s 120th birthday, including the appointment of two new shluchim to the South American country.

At gatherings held in Colombia, South America, and Stamford, Connecticut, shluchim planned their gifts for the Rebbe’s 120th birthday, coming up on Yud Alef Nissan. Among the many initiatives announced as part of Vaad Or Vechom’s hisoirerus to prepare for Yud Alef Nissan, the Head Shluchim of Colombia announced the appointment of two new shluchim to the South American country.

In Stamford, shluchim from around Connecticut and as far as Massachusetts were treated to a lunch headlined by a shiur in Veatah Tetzaveh by Rabbi Yosef Gopin and greetings from Rabbi Yisroel Deren and Rabbi Moshe Kotlarsky. Rabbi Kotlarsky spoke about the shluchim and yidden in Ukraine who need extra brochos at this time. “The world is shaking and it is up to us to make it ‘kulo zakai’ by fulfilling the Rebbe’s rotzon,” he said.

After watching a video of the Yud Alef Nissan farbrengen from 5732 where the Rebbe spoke about opening mosdos in honor of the Rebbe’s birthday, shluchim broke into smaller groups to brainstorm how they would gift the Rebbe this year. Each shliach pledged to establish new mosdos – initiatives – as part of the campaign to gift the Rebbe 1210 new mosdos in honor of Yud Alef Nissan. The mosdos that have already been pledged can be viewed at 1210mosdos.com.

In Colombia, where there are Chabad Houses in five cities, the shluchim held their first-ever kinus and announced two new shluchim who will be serving the country. Colombia is not the only place where shluchim pledged to bring out new shluchim as part of their participation in the 1210 mosdos campaign. In both Washington State and Montana, new shluchim were pledged, as well as mikvaos, schools, buildings, and projects in places around the world.

Shluchim gained so much from getting together and being mechazek each other that they made a hachlota to get together virtually once a month to learn a maamar of the Rebbe. Shluchim from each city pledged to bring 120 letters with 120 hachlotas in Torah and Mitzvos to the Rebbe by Yud Alef Nissan and to make a push to bring more people to New York to the Rebbe.

Or Vechom’s campaign to present the Rebbe a gift of 1210 new mosdos is quickly gaining steam. The “Shluchim’s Gift to the Rebbe,” now has 1028 mosdos generally pledged and 186 specif mosdos committed. Visit 1210mosdos.com to add your mosdos to the worldwide tally.