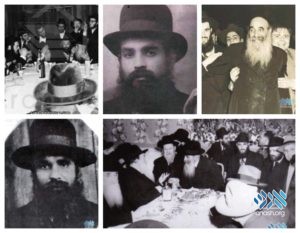 Rav Yitzchok Dubov, a Tomim who had learned in Lubavitch under the Rebbe Rashab and was a respected rov and rosh yeshiva in Manchester, “happened” to be in New York, visiting from Manchester, for his son Leibel’s wedding, when the Frierdiker Rebbe was nistalek on Yud Shvat, 5710/1950.

The week of shiva he watched as the Rebbe – then still known as The RaMaSH – davened for the amud and would repeat stories of the Frierdiker Rebbe. He had met the Rebbe when he would visit the Frierdiker Rebbe in Riga – where Rav Dubov served as rov in the Chassidisher Kehilla. What he saw now during the shiva week made him realize that the Rebbe is the true memaleh makom. When he returned home to England, he got to work, writing letters full of Chassidishe hergeshim, convincing other Chassidim that we have a Rebbe!

The following two stories are a sampling of his true hiskashrus:

On Simchas Torah 5721/1960, the Rebbe held a “contest” of sorts, naming representatives of different countries, and seeing who will be more medayek when it comes to a nigun. Reb Shmuel Betzalel Althoiz was the Australian representative. Reb Shmuel Zalmanov the American one and Rav Dubov the English representative. Others were chosen as well.

The Rebbe asked that each one choose a nigun to sing. When it came his turn to sing he was already after kiddush and L’chaim and said to the Rebbe: az der Rebbe iz in Amerikke vet Amerikke zicher gevinnen! (If the Rebbe is in America then America will surely win.) He then proceeded to sit down without singing. The Rebbe smiled broadly. Needless to say, America won.

On Shabbos Chazon 5726/1966, Rav Dubov was in 770 by the Rebbe’s farbrengen. He approached the Rebbe during the farbrengen, mentioning that his birthday was this week, on 7 Av, and that he’d be reaching his Shnas Hashmonim (His 80th year). The Rebbe answered “Amen!, and continued “zol zein tzu tishim shonoh!” (May it be to 90 years.) One week before his 91st birthday, on Rosh Chodesh Av, 5737/1977, he passed away and was buried in the Manchester Cemetery.

Before he passed away, he mentioned the following to a fellow chossid:

“There are two merits that will accompany me when my time is up and I’ll be summoned before the Heavenly Court. “The first one is that I was strongly involved – along with Reb Mordechai Dubin – in working for the release of the Frierdiker Rebbe from prison in 5687/1927 and ultimately being allowed to come to Riga. “The second is my work to let the world know about the Rebbe and encouraging the world to have the Rebbe accept the nesius…”