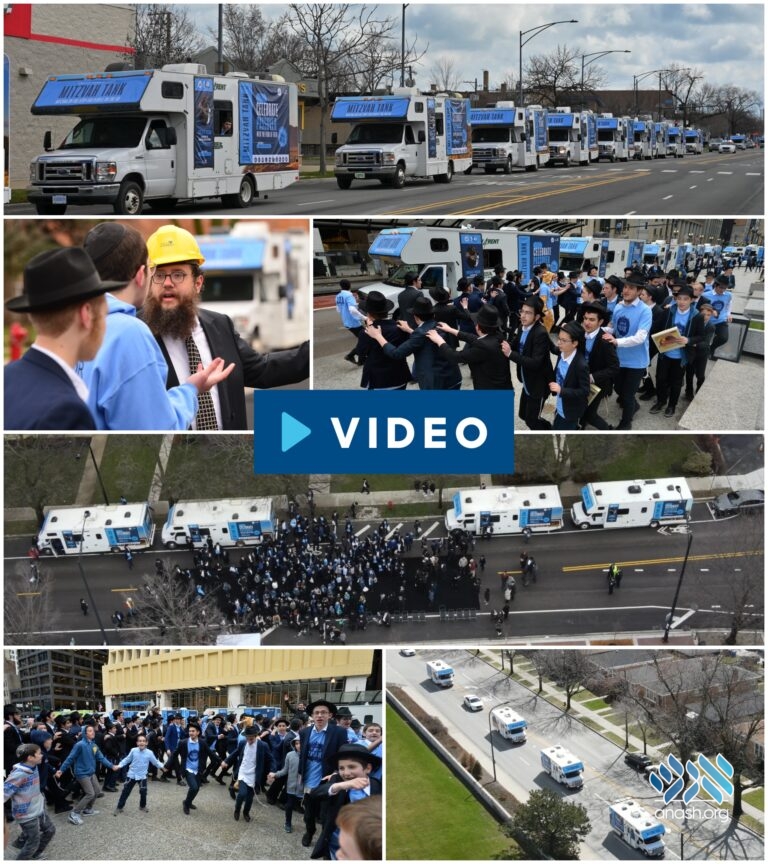 More than forty years after Rabbi Daniel Moscowitz was sent to Chicago on shlichus, two of his grandsons continued in his ways by arranging a grand Mitzvah Tank Parade ahead of Yud Alef Nissan.

In every generation they rise up – to bring the message of Pesach to their community.

More than forty years ago Rabbi and Mrs. Daniel Moscowitz returned home to Chicago to reinvigorate and expand the efforts of Chabad in the Rabbi’s home state.

Fifty plus centers later and a whole new generation is burning the lamp so much brighter. Twenty-five years ago young generation #2 of Moscowitz brothers banded together with their classmates and created Chicago’s first mitzvah tank parade – outfitting a few RVs with some hand-painted signs and headed out to distribute shmurah matzo and Passover info.

The trend caught on and as that group of classmates graduated and assumed the leadership of their own Chabad centers, their younger brothers and compatriots assumed the honor of organizing and executing this annual event.

Baruch Hashem, the Chicago Chabad community has blossomed and now includes a Mesivta with more than 150 bachurm, ka’h, and a vibrant Anash community brimming with enthusiasm for the Rebbe’s mivtzoim. Each year the newest group would organize a wonderful parade of mitzvah tanks and everyone vied to participate and be a part of this special event.

The challenges of the pandemic and the resultant disruption have made everything a greater challenge and good old-fashioned street mivtzoim really took a hit as people hunkered down at home afraid to venture out; and when they donned their masks were in no mood to be stopped by a polite bachur and touch the matzo box he offered. As the world reemerges from hibernation the new generation saw the opportunity to get out there and change the world … for good!

Levi Moscowitz and Levi Moscowitz, first cousins and generation #3 of Moscowitz shluchim to Illinois, began months in advance to produce a parade and mivtzoim that would make the Rebbe and their late grandfather, Rabbi Daniel Moscowitz ע’ה proud!

With strict adherence to every moment of seder they employed all forms of modern communication to contact their Chicago classmates in yeshivas around the world, work together with the local mosdos and arrange for the rental and decorations of 23 mitzvah tanks, making this year’s parade the second to largest worldwide! Honoring the Rebbe’s 120th year!

We all know about the supply chain issues and $5 a gallon gas and a hundred other reasons to settle for a modest event; all of us except these two cousins who have inherited their Zaide’s penchant for THINKING BIG and acting HUGE. They raised the funds, organized the drivers and stocked each RV with matzos, literature, and “tankists.” A special thank you goes out to the Anash community for dedicating their day as drivers!

Finally, on Wednesday, 5 Nissan, the drivers, eager bachurim and students from Cheder Lubavitch assembled outside the headquarters of Lubavitch Chabad of Illinois, involving a historic street closure, for a kick-off rally with the recital of the 12 pesukim, a raffle for a set of seforim and a bike, and awaaaaaay they went!

Travelling in convoy through the neighboring communities, they paraded to Daley Center in the heart of Downtown Chicago, enthusiastically danced in the Plaza, and then headed to their assigned spots to bring the uplifting message of Pesach to newfound friends, let them know where a local Chabad is hosting a communal seder they can attend, offering them a shmura matzo for their seder and a chance to put on tefillin and Shabbos candle kits.

As the day wore on the reports came back of the 1,200 maztos delivered, dozens of tefillin worn and the smiles generated! A true gift for the Rebbe’s 120th birthday!