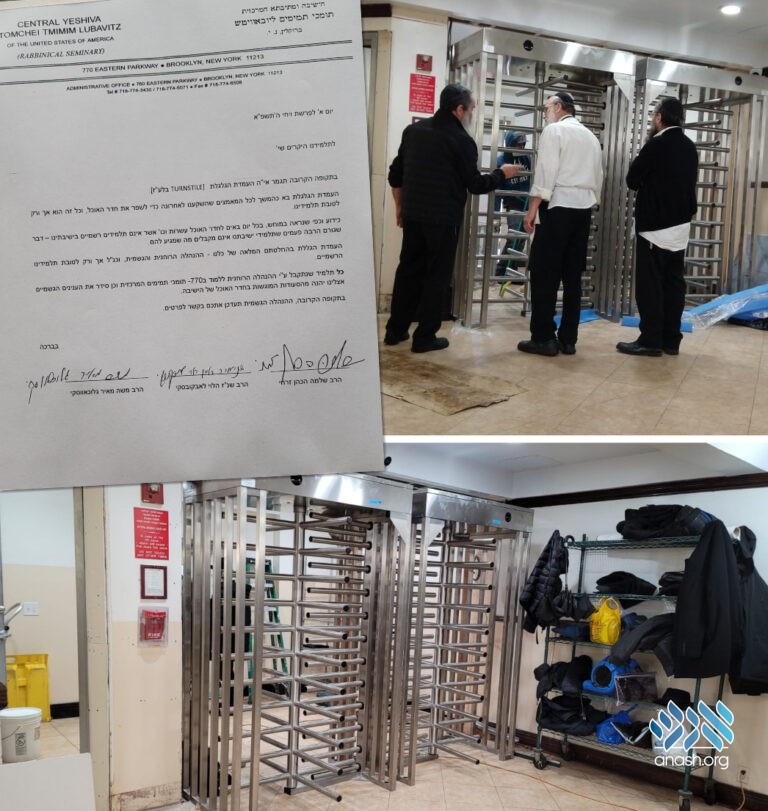 The administration of the 770 yeshiva installed a new turnstile at the entrance to the dining room in the dorm at 1414 President St. The move was explained by members of hanhala in a letter released on Sunday.

After weeks of work, a new turnstile was installed at the entrance to the dining room in the dorm at 1414 President St. The move was explained by members of hanhala in a letter released on Sunday.

The dormitory at 1414 President St. is the main dormitory for the Israeli kvutzah, as well as for a large number of American and European bochurim who are spending the year learning in 770. The lunchroom, located in the basement of 1414, feeds the bochurim who stay in the dormitory, as well as bochurim enrolled in the 770 yeshiva who dorm elsewhere.

For years, a wide variety of strangers would join the bochurim in the dining room. Some were “regulars”, others included guests who visited New York with no plan of where to eat, or even young men who stopped there instead of walking home.

Sources told Anash.org that the new installment has been in the works for years. It was finally built following a string of complaints that the outsiders who were entering during mealtimes were enjoying the yeshivah’s food at the expense of the enrolled students.

In a letter addressed to all the Yeshiva’s students and signed by Rosh Yeshiva Rabbi Shneur Zalman Labkowski, Mashpia Rabbi Shlomo Zarchi, and Administrator Rabbi Moshe Meir Glukowsky, they explained the necessity of the new measure.

“The construction of the turnstile comes as a continuation of all the efforts we have made recently to improve conditions in the dining room, all for the sole benefit of our students,” they wrote.

“As is clearly apparent, every day dozens come to the dining room who are not official students in our yeshiva, which often results in our yeshiva students not receiving what they deserve,” the hanhala wrote in the letter.

Going forward, only students who were accepted as students in 770 by the hanhala ruchnis who have also arranged all financial matters with hanhala gashmis will be allowed to eat in yeshiva’s dining room.

The new turnstile is likely to operate based on a fingerprint system similar to ones recently installed in a number of Crown Heights Mikvahs. A new door was built on the left of the 2 turnstiles, to allow access on Shabbos and Yom Tov.