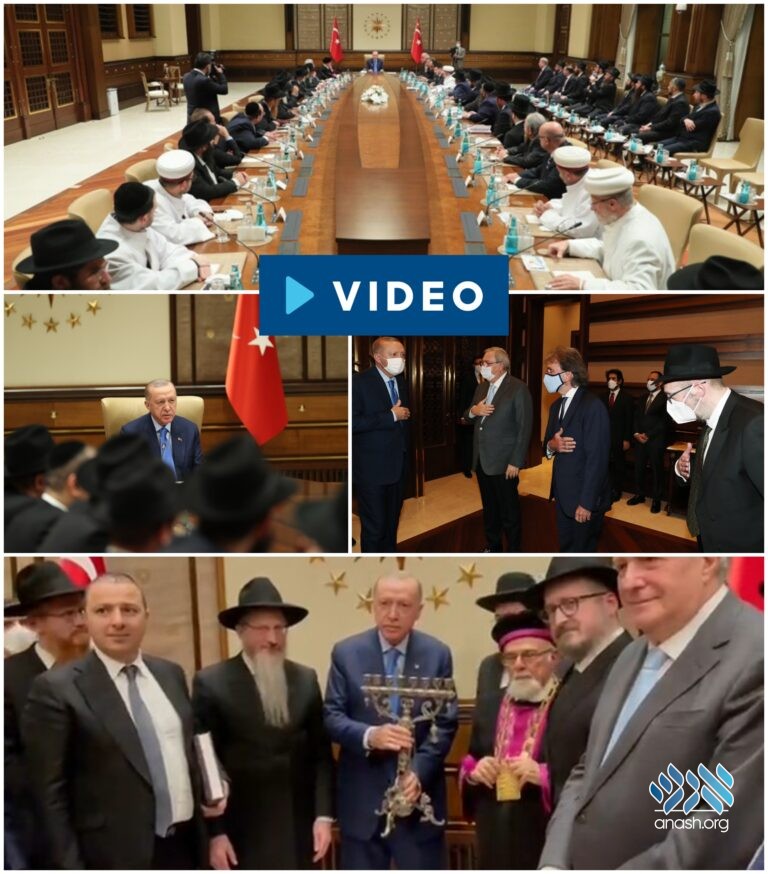 Turkish President Recep Tayyip Erdogan welcomed a delegation of rabbis and shluchim from across the Muslim world into his palace on Wednesday, warmly greeting them and holding an extended conversation with them.

Turkish President Recep Tayyip Erdogan welcomed a delegation of rabbis and shluchim from across the Muslim world into his palace on Wednesday, warmly greeting them and holding an extended conversation with them.

Heading the delegation were Chief Rabbi of Turkey Ishak Haleva, Rabbi Mendy Chitrik, Head Shliach to Turkey, Rabbi of the Ashkenazi community, and chairman of Alliance of Rabbis in Islamic States. Accompanying them was Rabbi Berel Lazar, Chief Rabbi and Head Shliach to Russia.

The delegations of rabbis had gathered in Turkey for the first summit of the Alliance of Rabbis in Islamic States, a union of rabbis serving communities in Muslim countries. President Erdogan welcomed them, along with local rabbis serving in Turkey, into his palace in Ankara, the country’s capital.

The President opened with personal blessings and a warm welcome from the Turkish people, noting his appreciation towards the Jewish contribution to Turkey

Erdogan stressed that antisemitism and Islamophobia are not tolerated in Turkey. “They are crimes against humanity” he stressed and “we need solidarity against it” adding that he “will not allow daily politics to impact religious freedoms.”

Erdogan appealed to the Rabbis to improve cooperation and maintain dialogue, whilst pledging to work together for Middle East peace.

The Chief Rabbi of Turkey, Rav İsak Haleva, pointed out that the Turkish Jewish Community lives with confidence and religious freedoms in the Turkish geography which sets a very positive example for the religious leaders of the Jewish communities living in other Islamic countries.

Rabbi Chitrik thanked Erdogan at the meeting for making Turkey a “symbol of Jewish-Muslim relations,” saying that the rabbis hope to develop these ties even further.

“The rabbis left the meeting feeling very good and were happy to hear from President Erdogan that he would work to strengthen Judaism in Islamic countries,” he told the Israeli site YNet.

The historic summit attracted Rabbinic leadership representing over 100,000 Jews living across the Muslim World, including the Chief rabbis of Kazakhstan, Uzbekistan, Iran, Azerbaijan, Kyrgyzstan, Uganda, Nigeria, Albania and the United Arab Emirates as well as North Cyprus and others.

Rabbis of Morocco and Tunisia sent greetings and participated virtually after they were unable to travel due to domestic corona restrictions.

ARIS Chairman Rabbi Chitrik reflected on the unique gathering: “A historic summit of rabbis of the Muslim world, where rabbis recommitted to help each other to fulfill their communal duties.”

“We deeply acknowledge the leadership of our countries for securing our abilities to live Jewishly to the fullest extent”, Chitrik added.