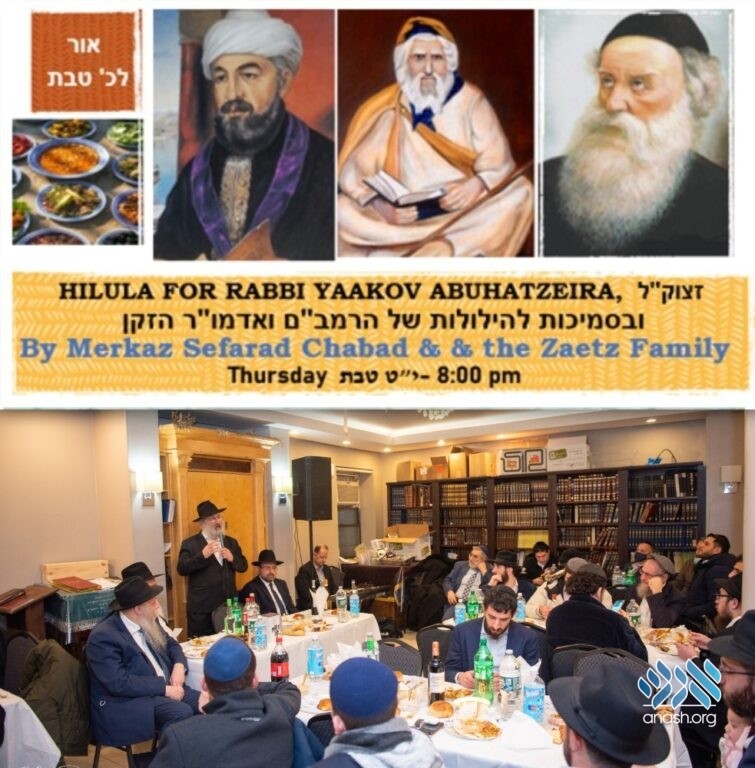 Merkaz Sefarad Chabad and the Zaetz family are inviting the Sefardi community members of Crown Heights to an event marking the hiloula of Rabbi Yaacov Abuhatzeira, the Rambam and the Alter Rebbe.

Merkaz Sefarad Chabad and the Zaetz family are inviting the Sefardi community members of Crown Heights to the annual hiloula of Rabbi Yaacov Abuhatzeira, זצוק”ל, known as the ‘Abir Yaacov’.

Rabbi Yaacov Abuhatzeira is the grandfather of the Baba Sali זצוק”ל whose Hiloula is two weeks later in 4 Shevat.

20 Tevet is also the Hiloula of the Rambam and the grandfather of Rabbi Chaim ben Attar, otherwise known as the Or Hachaim Hakadosh.

The annual Hiloula also takes place just days before 24 Tevet, which is the Hiloula of the Alter Rebbe.

The Hiloula is partially sponsored by Mrs. Chaya Zaetz, a granddaughter of the Baba Sali, her family, and the Merkaz Sefarad.

Separate sections for men and women.

The Hiloula will take place in Ulam Chana, 556 Crown Street this Thursday night at 8:00 pm.