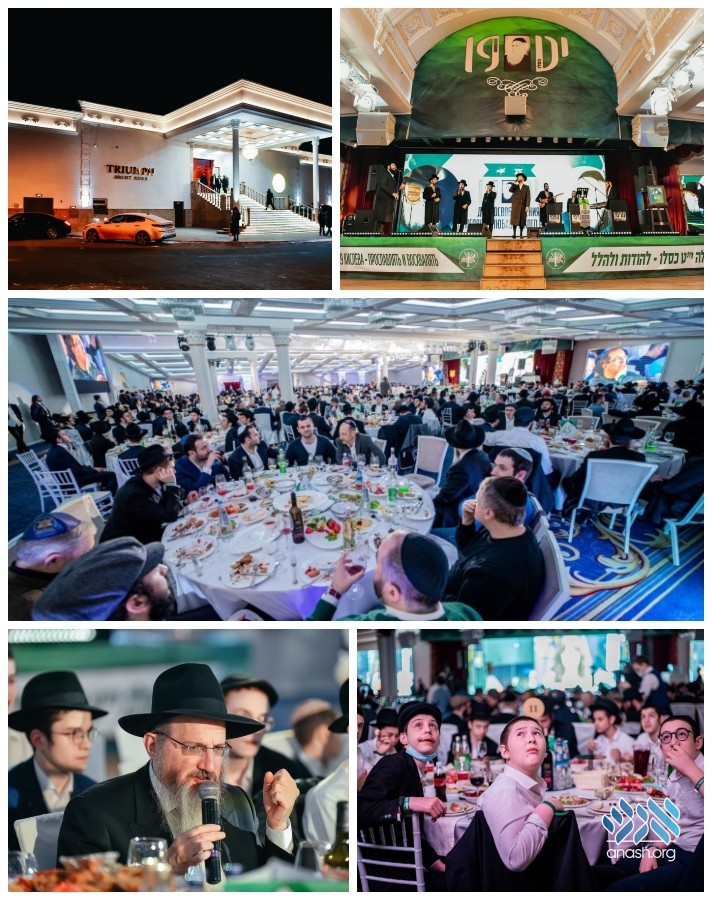 The central Yud Tes Kislev farbrengen at Moscow’s Triumph hall was cause for two more celebrations when a boy who underwent a bris was given a Jewish name and another one got a Pidyon HaBen.

It’s been many years since Moscow experienced such pure Chassidic joy as Jews from all ages and stages danced together and rejoiced in the liberation of the Alter Rebbe, author of the Tanya and the Shulchan Aruch. The date of his redemption has become synonymous with Mesirus Nefesh for Torah and Chassidus, which takes on new meaning in this country – Russia. The crowds were uplifted both spiritually and physically on this special day as they participated in the central Farbrengen, during which they tasted from the light and joy of Chassidus, “filling up their vessels” for the rest of the year.

“What is Chassidus and How to Live like a Chosid” – this was the central theme of the evening, addressed by Chief Rabbi of Russia, Berel Lazar, in his main speech, and later expounded on during the informal farbrengen until the wee hours of the night.

This grand event has become the leading celebration of Yud Tes Kislev in Moscow, in addition to its many smaller farbrengens and events taking place in shuls and Chabad Houses throughout the capital. It was organized by the Gabbaim of the Marina Roscha shul in the center of Moscow.

Every year a guest speaker is flown in, with this year’s guest being Rabbi Chaim Danzinger, the Rebbe’s Shliach to Rostov. Rabbi Danzinger shared stories from his life on Shlichus in this special city where the Rebbe Rashab is buried, and expounded on the great level of Baalei Teshuva.

The Director of Moscow’s Jewish Community Center, Shliach Rabbi Mordechai Weisberg, who emceed the event with great taste, explained why this year the main theme chosen was “lehodos u’lehalel” – to thank and to praise, for the great wonders and miracles that the community merited to see during the Covid pandemic. Personal stories were shared by the Chief Rabbi as well as by Rabbi Yitzchok Kogan of the Bolshaya Bronaya shul.

There was a rush of emotion in the crowd when shliach Rabbi Gershon Lisus got up to speak. One of the first shluchim in the Moscow community to get sick with Corona, his life was miraculously saved after weeks in a coma. A little boy from the community who fell out of the fourth floor window and whose life was also miraculously saved, got up on the stage as well, and together with Rabbi Lisus, they led the guests in reciting Tehillim. Certificates of appreciation were awarded to the doctors who were Hashem’s angels in saving their lives, and they described the open miracles that they witnessed.

The crowd enjoyed Chassidic music and singing by the “Malchus” choir, conducted by Reb Pinchos Bichler, with singer Reb Akiva Groman, accompanied by the orchestra of Reb Shimi Sklar.

The farbrengen was attended by Chief Rabbi of Odessa, Shliach Rabbi Avraham Wolf. Bentching was led by president of the community Rabbi Boruch Gorin, and a dollar from the Rebbe was won by a student of Moscow’s Tomchei Tmimim who came from Kaliningrad.

During the evening, a Jewish boy who was circumcised that day was given his Jewish name, and another one of the guests had a Pidyon HaBen. The event continued until much later than expected, with a beautiful feeling of unity and joy felt by all.