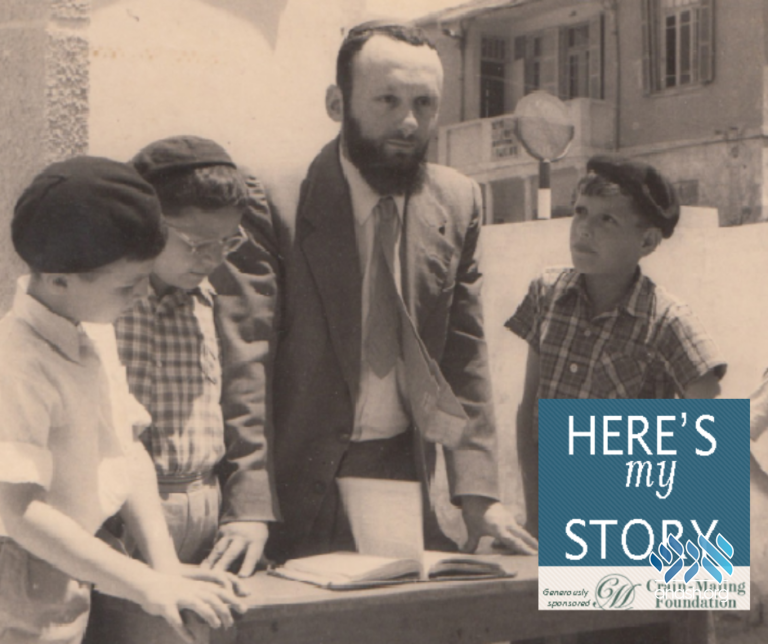 My father was a descendant of the Gerrer chasidic dynasty of Poland, in a direct line from the Gerrer Rebbe, Rabbi Yisroel Rottenberg. Unfortunately, he was not able to stay in Poland with his people. When he was drafted into the Polish army, he had to run – he escaped to Germany where he married my mother. I was born in Germany in 1930, but after the Nazis came to power – before the start of World War Two and the Holocaust – my parents managed to immigrate to Israel.

That is where I grew up and was educated. Shortly after I got married, my wife and I were offered teaching positions in Brazil, and in the summer of 1956, we moved to Sao Paulo. But things didn’t turn out as we expected. Because of the problems we encountered, I turned to the Lubavitcher Rebbe for advice, and thus began my ongoing correspondence with him – centered mostly on educational issues and challenges.

After a year, we decided to return to Israel. On the return trip, we stopped in New York to visit my grandmother, and I used this opportunity to meet the Rebbe.

During that audience, we spoke about Brazil and my work there. I also confided in him an idea I had been mulling over of staying and teaching in New York for a bit. Initially, the Rebbe objected, “Is there a lack of teachers here? In Brazil they need teachers more than in New York.” But when I explained that I already found someone to take my place in Brazil, the Rebbe didn’t press me further.

That’s how it happened that we stayed in New York for two years (1957-1958), during which time I taught at Yeshiva Ohel Moshe in Brooklyn. At the end of each school year, I brought my class for an audience with the Rebbe, and the Rebbe delivered a short talk to the boys. In general, throughout those two years I was privileged to have a close connection with the Rebbe, and I would like to share one anecdote that stands out in my memory.

One day, I received a letter from my brother in Israel that my father had suffered a heart attack and that his condition is critical. Although nowadays it is hard to understand this, back then transcontinental telephone calls were rare because of the high cost, so the most common method of communication was by letter, which would take approximately a week to reach the US from Israel. I made the calculation that the letter, which arrived on Thursday, was probably sent on Sunday, meaning that almost a week had passed since the incident, and I was very worried about what might have happened since.

So immediately, I ran to bring a note to the Rebbe, stating what my brother had written, that my father’s situation was dire and concluding: “I don’t even know what to think at this point…”

The answer came back quickly. In his response, the Rebbe underlined my words: “I don’t even know what to think at this point…” and he wrote on the margin, “Shocking!!!” with three exclamation marks.

Those exclamation marks conveyed the strength of his emotions – “Shocking!!!”

Below that, he wrote in Yiddish: “The instruction of our Rebbes is well known: ‘Tracht gut vet zein gut – Think good and it will be good. I await good news.”

The moment I received this response from the Rebbe, I immediately calmed down – I knew that my father was still alive. I continued to pray and recite psalms, and after a couple of days, I mustered the courage to telephone my parents’ home.

When my mother picked up the phone, I asked, “How is father?”

“He’s out of danger,” she replied. “Thursday night his condition stabilized.”

I was very relieved to hear that and I wanted to inform the Rebbe of the good news. So I made my way to Chabad Headquarters for afternoon prayers, making sure to stand where the Rebbe would see me as he entered.

“Do you have good news for me?” he asked.

“My father is out of danger … I just spoke to my mother in Israel.”

“When did his condition improve?” the Rebbe asked.

“And when did you start to think good?” he prompted.

“When the Rebbe told me to.”

Do you understand what the Rebbe was telling me? He was saying that I’m the one who saved him! Changing my mode of thinking had an actual impact on my father’s recovery! (At the same time, I think that in his humility he wanted to deflect attention from the fact that in that very same Thursday night encounter where he told me to “think good,” the Rebbe had given my father his blessing, as well!)

“May such things never happen again,” the Rebbe declared, adding, “but you must remember to always think good.”

Rabbi Avraham Rottenberg, a Gerrer chasid and veteran educator, lives in Bnei Brak, where he was interviewed in August of 2012.