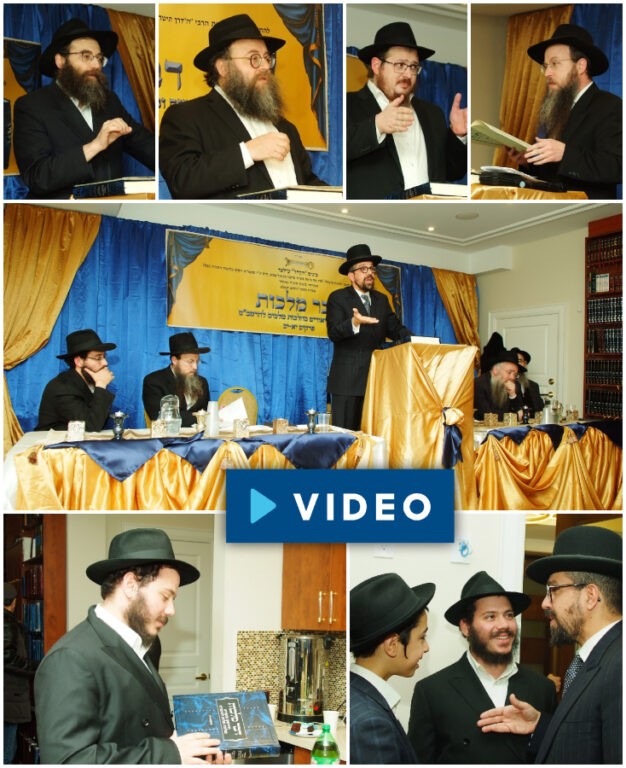 A large Hakhel event was arranged in honor of the Rambam’s yahrtzeit in Thornhill, Toronto. Several Rabbeim and Maggedei Shiurim spoke about the importance of the Rambam’s Hilchos Moshiach and Dvar Malchus

On the 20th of Teves, the Rambam’s yom hilula during this year of Hakhel, a grand Hakhel event was held in Thornhill, Toronto. The Hakhel event focused on the Rebbe’s horah in the sicha of Shabbos Parshas Shemos 5752 to strengthen the learning of Rambam and specifically the last two chapters that deal with Melech HaMoshaich and Yemos HaMoshiach.

The Hakhel kinus was focused specifically on learning the Sefer Dvar Malchus about hilchos Moshiach from the Rambam with the Rebbe’s biurim.

The gathering took place in JRCC South Thornhill and was run by shliach Rabbi Levi Blau. The event started with a video of a sicha from the Rebbe from the 20th of Teves 5749 explaining the last halacha of Hilchos Moshiach.

Following the video, Rabbi Levi Jacobson, a Rov and shliach in Toronto spoke about the Sefer Dvar Malchus where all the Rebbe’s biurim in Nigle and Chassidus are compiled together in one book. Afterward, Rabbi Yosef Gorman, the rosh yeshiva in Mesivta Lubavitch Toronto, spoke about the power of learning the last two chapters of Rambam and how it will bring about the coming of Moshiach speedily.

Rabbi Yitzchak Chakak, the Rov of Kehilas Sharei Tzion of Toronto, spoke about the great passion the gedolei Yisroel had throughout all the generations for the coming of Moshiach, and specifically the Rambam who added the belief in Moshiach as one of the 13 Ikarim.

Other speakers touched on similar topics such as the halachic criteria of Moshiach by Rabbi Yoel Doron.
Rabbi Yakov Kamman, a mashpia in Yeshivas Lubavitch Toronto, who compiled a full book of Chidushei Torah on Hilchos Moshiach of the Rambam, showed everyone the booklet Dvar Malchus he received from the Rebbe as a child. He shared that receiving the book was the beginning of him actually understanding what Moshiach is all about. It gave him a concrete idea and not only an abstract understanding.

Rabbi Levi Zaltzman spoke about the Rambam’s opinion about the status of the nations of the world in the days of Moshiach. As the program came to a close, Rabbi Menachem Ezagui took the stage, before he called up Rabbi Avrohom Man, Rabbi Ezagui mentioned that he owed Rabbi Man a “thank you.” 10 years earlier he was the one who inspired Rabbi Ezagui to put together the Dvar Malchus.

Rabbi Ezagui shared that he learned the hilchos Moshiach by heart, and would recite them every day. As he did so he would think about the Rebbe’s explanations of the verses. This would ultimately lead to his idea to put everything together in one book.

Rabbi Ezagui finished by sharing what the Rebbe spoke about in the sicha of shabbos Parshas Vaera in 5752. The Rebbe said that everyone should add to their hishkashrus by “lehavi leyemos hamoshiach.” In a footnote on these words, the Rebbe explains that this is done by learning Hilchos Moshiach in the Rambam and spreading those ideas to others.

All of the participants were uplifted and energized to add to their learning of the Sefer Dvar Malchus and the book was offered at the event for a discounted price.

If you are interested in buying the Sefer Dvar Malchus it is available in any seforim store in Crown Heights. You can contact Rabbi Ezagui directly through WhatsApp at 347-415-3666

You can see a video of the event below: