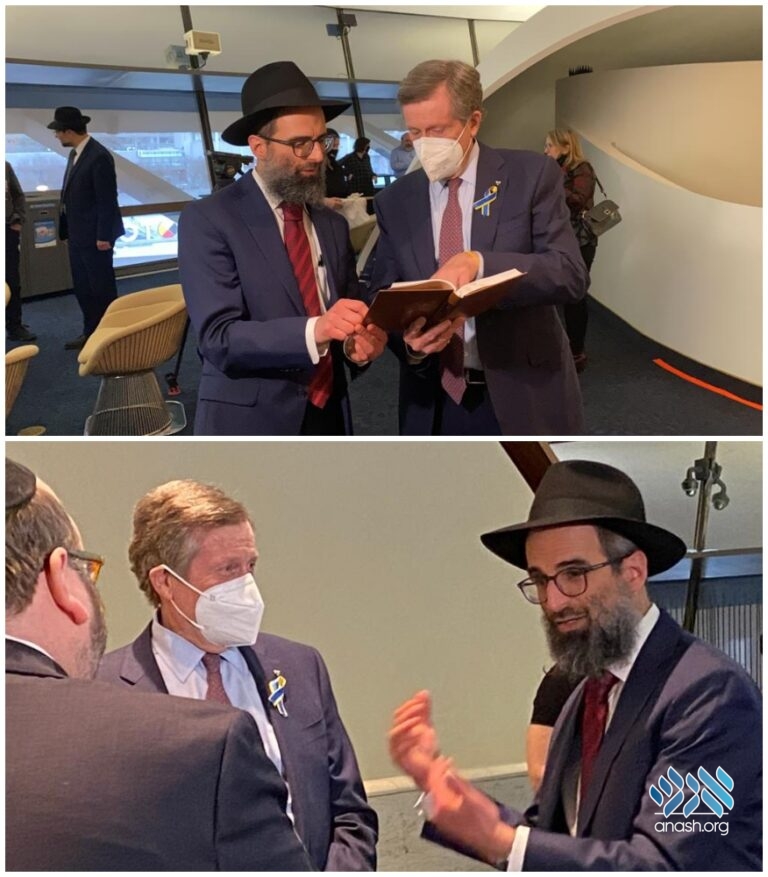 After being presented with a Hebrew-English Tehillim, Toronto Mayor John Tory asked about something he had seen by the Pesach Seder. In response, Rabbi Yirmi Cohen related a lesson and a prayer.

On Tuesday night, while at a meeting at Toronto City Hall together with a small group of invited guests from the Jewish Community, Rabbi Yirmi Cohen presented to the Mayor of Toronto John Tory, a Tehillim in Hebrew and English.

The Mayor was moved by the gift, especially after hearing about who the composer was, King David – Dovid Hamelech. Rabbi Cohen told the mayor, who was born to a Jewish mother, how much Tehillim is recited among Yidden and about the power of prayer, especially with events in Ukraine and the world.

Rabbi Cohen noted to Anash.org that the mayor is a world leader on stage and respected globally, as the representative of one the most important cities in the world. He has even been put on that list of world leaders who have been banned from entering Russia by Putin, for condemning his actions.

In the Tuesday meeting, Rabbi Cohen briefly mentioned the “Moment of Silence,” that the Rebbe pushed so much for. :I hope that eventually the Mayor will push it,” he said.

“The Mayor laughed when I reminded him of when he was at our Seder on Pesach, I kept overflowing the wine from my cup. He couldn’t understand, why to waste wine?”

“So I explained the reason, that we are asking to overflow our cups with blessing,” Rabbi Cohen said.