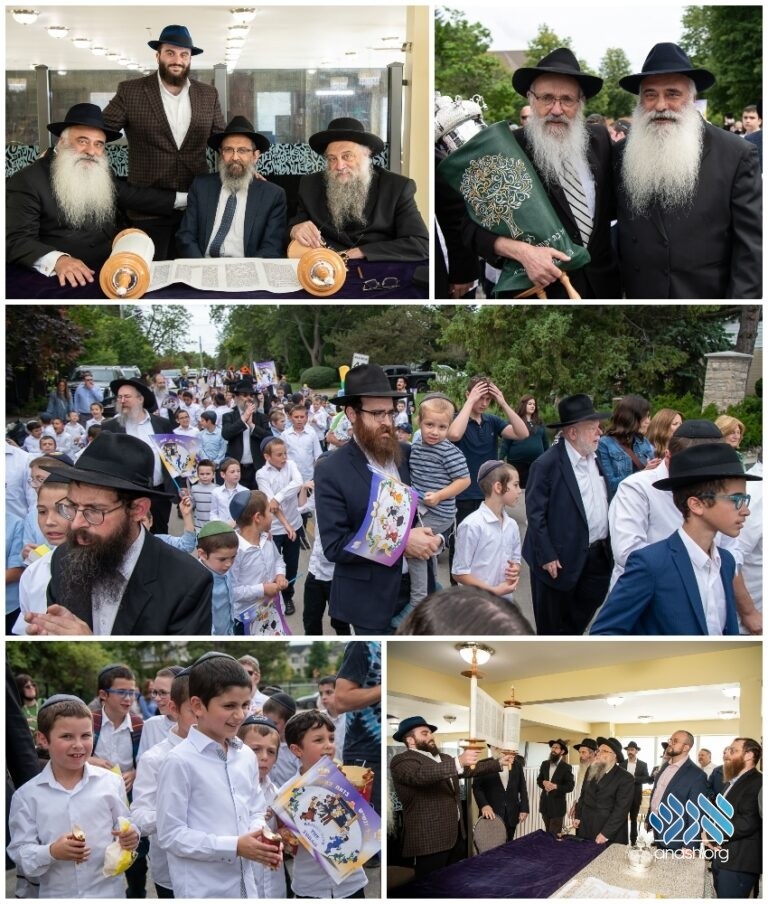 The Torah was gifted to the Cheder by the Harrouch family, on the recent yahrzeit of Mrs. Yael Harrouch A”H. The Cheder was a place Mrs. Harrouch deeply respected, and where every Cheder boy held a very special place in her heart.

Lovingly known as Morah Yael to many, Mrs. Harrouch was a legendary teacher and mentor to hundreds of Jewish children in France, Morrocco, and Canada for more than forty years. Morah Yael’s devotion to every single child’s success was unparalleled. When asked from where her inspiration stemmed, she would reply, “The Lubavitcher Rebbe gave me a personal Bracha to be successful in Chinuch!” Morah Yael treated each child in the classroom as she would her own son and daughter, with infinite patience, love, and constant encouragement. She would say, “Every student of mine is a Sefer Torah.”

A grand Hachnasas Sefer Torah celebration was held on Sunday. The completion of the Torah took place at Beis Franklin shul, next door to the Cheder. Afterwards the Torah was paraded around the block under a chuppah by more than 200 students, Rebbeim, family and friends.

The parade began and concluded at the Cheder, and was followed by “Atta Hareisa”, honoring the Harrouch family as well as the Cheder Chabad administration and melamdim. The final passuk was recited by Cheder boys, their sweet voices filling the air. Hakafos followed, coupled with joyous music and dancing. The Cheder boys were also treated to beautiful peklach and other yummy treats.

In the evening a grand seudas mitzvah was held in Beis Franklin shul for close friends and family, who came in from far and near. The seudah was catered by Mabruk catering. Rabbi Bard-wigdor (menahel of the Cheder), Rabbi Baruch Zaltzman (Dean of Mesivtah Ohr Temimim Toronto, and former menahel of the Cheder), both shared their personal experiences that they had working with Mrs. Harrouch. Dayan HaRav Ephraim Cremisi (Montreal), a close family friend, addressed the family in French. The crowd was moved by very touching words from the host Mr. Harrouch, as well as a trip down memory lane shared by their son Hatamim Menachem Mendel Harrouch, who also moved the crowd with a hartzige song. A big thank you to Mrs. Soochie Eizocovics of “In the Most Delightful Way” for coordinating this very special event.

On Monday morning the Harrouch family joined the Cheder minyan and were all honored with aliyos, reading the Torah, and hagbah. The Torah was then placed back in the Aron Kodesh and the minyan broke out in spontaneous joyous dancing of sisu vesimchu.

Shmuel Zahavy Cheder Chabad is honored to receive this Sefer Torah, which now resides in the Cheder’s newly renovated shul. Morah Yael certainly made a mark on the lives of the boys she worked with. This Sefer Torah makes her “mark” everlasting and eternal.