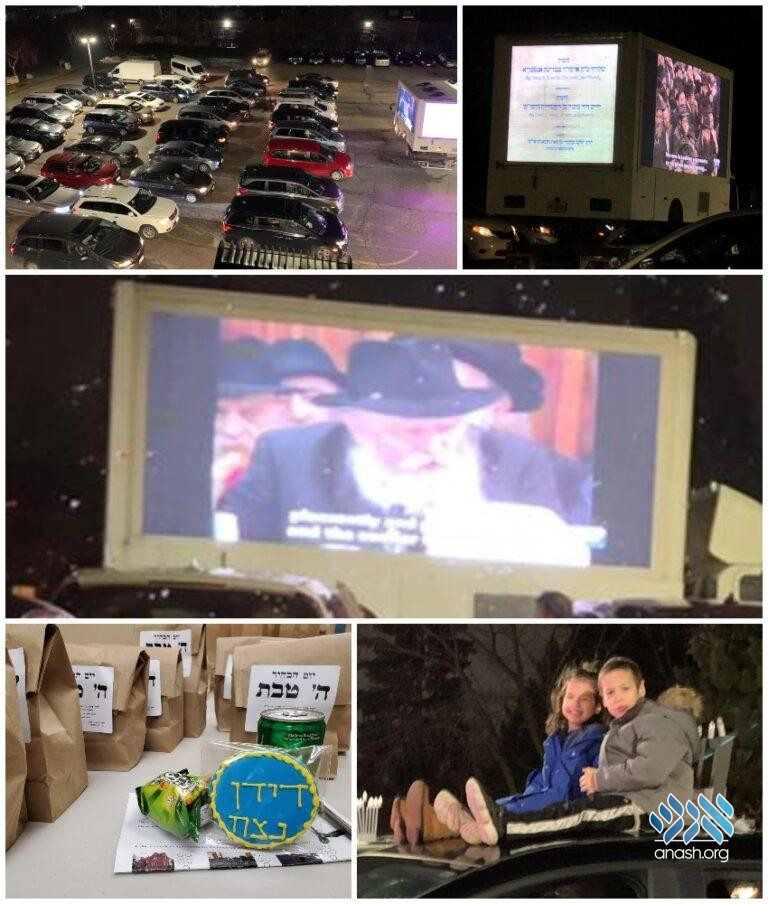 Over 400 people gathered for a drive-in Hey Teves farbrengen at Chabad Gate in Toronto, organized by Shluchim Rabbiss Mendy and Shmuli Grossbaum.

Since the citywide lockdown in March, the Chabad community of Toronto held numerous zoom Farbrengens, and socially distant ones after Davening on Shabbos, but did not gather as they previously did.

A few weeks prior to Hey Teves a group of Shluchim brainstormed about a way to celebrate and mark the Yom Tov of Hey Teves as a community. “We decided to that it was not going to be another zoom,” said Rabbis Mendy and Shmuli Grossbaum, organizers of the event. With the help of generous sponsors, a beautiful drive-in Farbrengen was organized.

On Sunday evening, Hey Teves, over 400 people; men, women and children, drove their vehicles and filled up the parking lot of 770 Chabad Gate. As cars entered the parking lot, volunteers distributed packages to each car. Adults were treated to sushi, while the children, were given packages with custom made Didan Notzach cookies and nosh. Included in the parcel was an activity sheet with multiple choice questions to help the youngsters follow the program and incentivized them to be entered into a raffle.

With the sound transmitted to their cars, on 100.3 FM, A Movement on Trial, produced by JEM the assembled viewed the one hour video from the giant screens on both sides of the video rental truck.

While a few participants relived the events of Hey Teves others learned new details. Yet, young and old alike left with a feeling of exuberance and excitement. Community feedback following the event was testimony to an incredible program.

“It will be forever etched in the minds of the children and teens that they had the opportunity to watch a video of the Rebbe on a huge screen in the middle of a parking lot from their cars, and that’s what matters,” said the event coordinators.