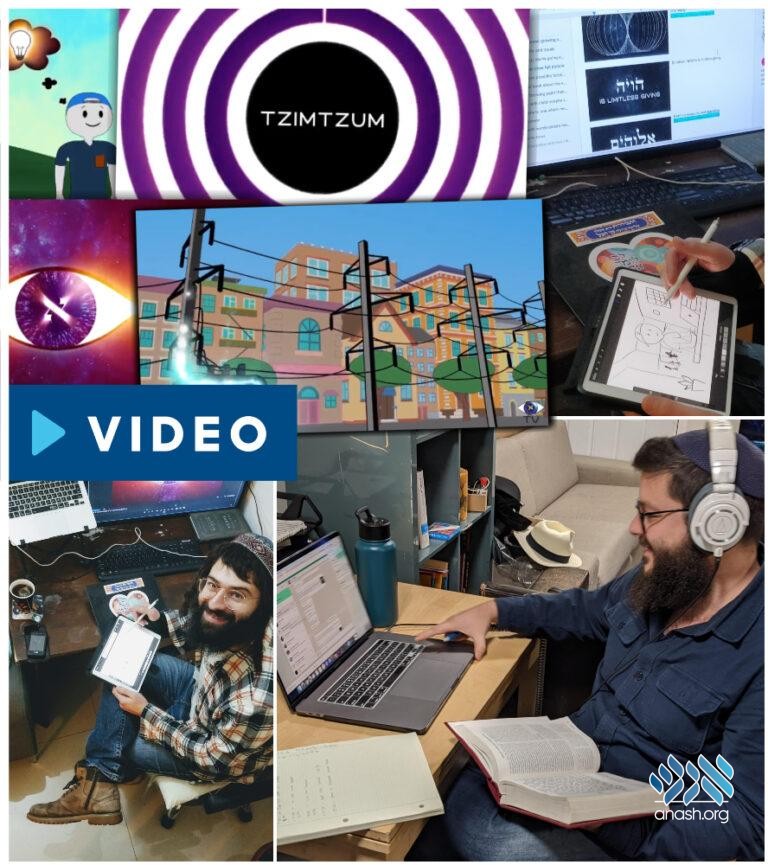 Seeking to bring abstract ideas to a visual generation, a group of young artists with a passion for Chassidus harness 3D animation and virtual reality.

As Jews everywhere wind down from the inspiration of Yud Tes Kislev, a revolutionary means of spreading Chassidus is opening up new horizons in hafatzas hamaayanos. Torah Visuals, a team of talented artists and writers from around the world, are working together to produce cutting edge animations that bring the study of Chassidus to new audiences across the globe.

It all began as the brainchild of Naftali Charter, an IDF special forces veteran with experience in the field of private security, coordinating security services for such high-profile locations as the new Chabad house in Mumbai, India. But outside of his career, Naftali found himself perturbed by a shortage of multimedia Chassidus content.

“Most classes you’d find online are basically someone talking directly to you,” he recalls. “But not everyone has the patience to get their inspiration that way. Not everyone wants to hear a lecture.”

Speaking to friends and acquaintances, a marked need for a new, fresh approach to teaching Chassidus quickly became apparent. An early attempt at creating short audio clips showed promise, but ultimately, Naftali saw the need for something much more dynamic.

When a friend introduced him to the possibilities of animation, he knew he’d found his answer.

“Animation has such an amazing way of teaching a concept directly,” he explains. “Especially when it comes to unaffiliated Jews, people’s defenses tend to go up when they see an unfamiliar face explaining things to them; it’s almost a ‘who is this Rabbi to tell me?’ sort of reaction.”

With animation, however, Naftali found that obstacle to be almost effortlessly surmounted. Viewers were much more receptive and attentive to a cleverly visualized message than a purely spoken one. With a clear vision in mind, the search was on to find the right team to bring the bold new concept to fruition.

From the start, Naftali connected with Shmueli Bell, a young artist with a keen taste and background in animation. The two were joined by Alter Deitsch, a young Tanya teacher who had already begun circulating his own “Tanya On One Foot” mini-classes, via social media, for some time. Together, the three pioneers determined to begin their initiative with a series on Sha’ar HaYichud VeHaemuna.

“We were finding that people wanted to know about Hashem first, before we started talking about how to serve Him,” Naftali explains. “It’s interesting to note that the Alter Rebbe himself considered putting Sha’ar HaYichud VeHaemuna before Likkutei Amarim when he wrote the Tanya. For our project, Sha’ar HaYichud was clearly the place to start.”

The concepts contained in Shaar HaYichud can be famously abstract and complex. It was precisely these, the team realized, that could be so effectively and powerfully illustrated through the technology and art of animation. With almost no precedent for a Chassidus series of this nature, they found themselves faced with quite a challenge.

The addition of Yisroel Fehler, an animator with a specialty in 3D animation, added a new level of professionalism to the project, and it wasn’t long before their groundbreaking work began to attract notice. As the venture gained momentum and support, the team was augmented by animators Yitzchok Schmulker and Chana Corna, as well as sound engineer Aizik Chanin, whose custom sound effects and background track give authenticity and richness to the onscreen experience.

For nearly a year the team worked on a pilot series, creating their first demo videos and raising the necessary funds to get the project off the ground. Animation, and particularly quality animation, is notoriously costly.

Gradually, things started coming together. The fledgling team partnered with Chabad.org, and began working with renowned Chassidus communicator Rabbi Tzvi Freeman and Chabad.org’s rabbinic authority Rabbi Avraham Altein to ensure their projects stay true to the letter and the spirit of the source material.

After much expense and effort, they at last completed their pilot series: How G-d Creates the World. The first episode, Tzimtzum: Containing the Infinite, was released last week to widespread acclaim both on Chabad.org and on the company’s own site, Torahvisuals.com, with subsequent episodes slated to be released each subsequent Tuesday.

“There’s a tremendous thirst for this,” Naftali remarks, with some pride. “This tech introduces the possibility to create entire worlds on a screen.”

This first series is just the beginning, however. The potential for high-quality animation to revolutionize how Chassidus is taught is almost limitless, and already several future projects have been added to the to-do list: a follow-up Tanya series, a spotlight on the deeper meaning of Shema, and more.

And they’re not finished with the groundbreaking quite yet. Quietly in production for months, alongside their primary series, has been a project to bring Chassidus for the first time to the exciting new realm of Virtual Reality.

“It’s really just endless,” laughs Naftali, as he outlines his vision for upcoming projects. “When Moshiach comes, my team is saying a quick L’chaim then getting straight back to work.”

Animating an entire episode is no small feat. Once the concept has been approved, the visual experience is meticulously plotted out in the form of storyboards. The completed script is then divided up among the animators, who apply their talents to bringing the idea to vivid life on screen. Then, audio has to be tailored to every motion and object before the finished product can be passed on for final review. Once it’s cleared, marketing manager Yonatan Loksen and social media coordinator Mimi Deitsch release and promote the final episode.

The entire process entails many hundreds of working hours per video, and tens of thousands of dollars. But to Naftali Charter and his team, it’s all worth it.

“We feel this is the next link in the chain of hafatzas hamaayanos,” he explains. “Bringing the light and teachings of Chassidus to a whole new audience, a whole new ‘chutza’. It’s something we’re all deeply committed to.”

Of course, Torah Visuals’ dream can only come true with the support and encouragement of fellow chassidim who appreciate the value of their revolutionary work. To support Torah Visuals with a donation via Cashapp, Paypal, or Zelle, click here. To join their Brand Ambassador program and help spread the word, sign up here to get involved.