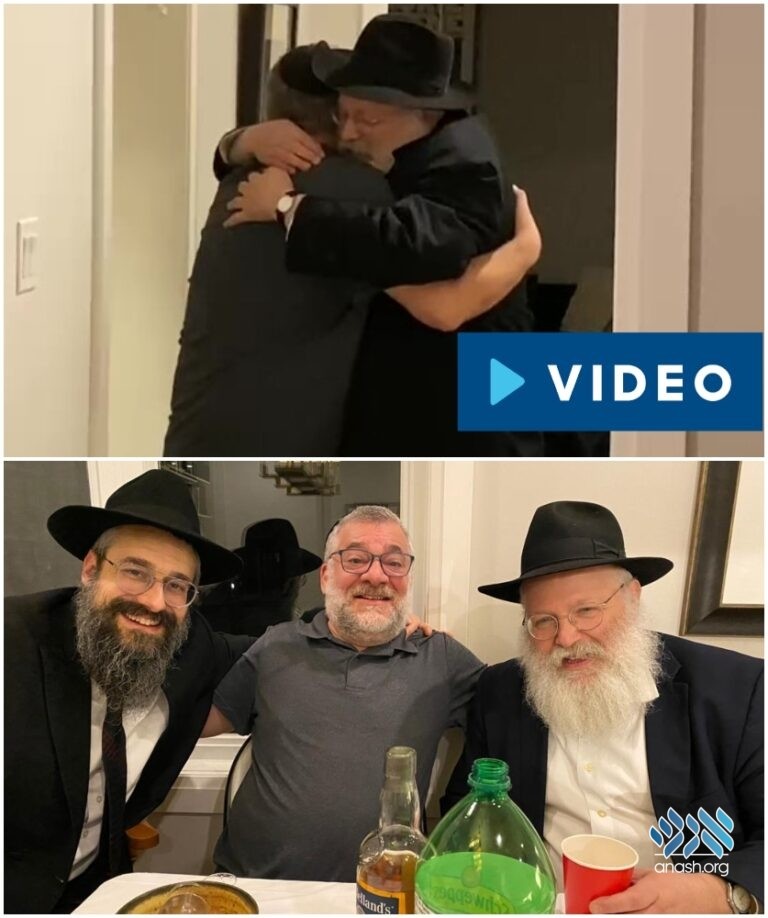 In the 1960s, a young Chabad boy befriended a neighbor, bringing him to Shul and teaching him the possuk of “Torah Tzivah”. The full effect of his actions was only revealed to him nearly five decades later…

In the 1960s, a young Chabad boy befriended a neighbor, bringing him to Shul and teaching him the possuk of “Torah Tzivah”. The full effect of his actions was only revealed to him nearly five decades later…

The story began during the covid-19 pandemic, when Rabbi Mendel Kaplan, shliach to Thornhill, Ontario, and spiritual leader of Chabad Flamingo, received a phone call. On the other end was a man who introduced himself as Jonathan Weiss.

Jonathan had a request for Rabbi Kaplan: He wanted to join his shul. He explained that up until then, he had driven to a further shul, but now, as he became more frum, he wanted to attend a closer shul that he could walk to.

It was strange to receive such a request in those days, when even the regulars weren’t showing up to shul, but Jonathan was a different type.

He quickly became a full-fledged member of the community, always with a smile on his face and ready for a l’chaim. He also continued growing in his Yiddishkeit, virtually changing his life from one extreme to the other. And so things continued to progress.

This year, being a Hakhel year, Rabbi Kaplan decided to hold farbrengens in the homes of community members. When he began planning the Rosh Chodesh Kislev farbrengen, he turned to Jonathan and asked him if he would host. He gladly agreed, and over 50 people joined the farbrengen.

Towards midnight, the crowd had already thinned out, and only 5 people remained. Jonathan, who was after a good few l’chaim, decided to share his life story.

“So why did I join an Orthodox shul? What drove me to become shomer Shabbos?” Weiss began. “Well, I have a memory from my childhood that doesn’t let me rest.”

“I was born about sixty years ago in Montreal. My life was difficult: My father left home and left my mother with three small children. I could have ended up on the street, but a boy my age became my friend.

“The boy, whose name I remember as Yeina (Yona, in a Yiddish-Russian accent) insisted on bringing me to the Shul every Shabbos. Every Shabbos morning, we would walk together to the Yeshiva Shul, which was a warm and welcoming place. Yeina’s father even gave me a siddur as a gift.

“There was also another boy, a friend of Yeina’s who encouraged me to memorize the possuk of Torah Tzivah. He told me that if I do, he would give me a prize.

“Years have passed, my family moved away, and I no longer had any contact with Yeina. Despite hardly having any Jewish connection during those years, those walks to shuls gave me no rest. In fact, when I later met a non-Jewish girl, and we were thinking of getting married, I stopped at the last moment, not being able to go forward.

Jonathan said that he later married a Jewish woman, his wife Allison Weiss, and she was herself connected to the Jewish community. But the memories of his youth eventually brought him back, and he found himself joining the Chabad shul.

“With all the difficulties I went through in my life, there was one thing I never gave up: the Siddur I received from Yeina’s father,” Jonathan said. “It his still here, sitting on a shelf and continuing to give me hope.

Rabbi Kaplan immediately said that he may know the answer… He knows a Yeina, who grew up in Montreal and is around the right age. In fact, that Yeina, who was Rabbi Yeina Shur, lived right there in Toronto!

Right then and then, disregarding the clock showing past midnight, Rabbi Kaplan called Rabbi Shur.

“Did you once know a boy Jonathan Weiss from Montreal?”

“What?!” Rabbi Shur replied. “Jonathan?! He is one of my favorite childhood memories, but I haven’t seen him in over 40 years!”

“If their embrace when they saw each other for the first time would have been connected to a power plant – it could have generated electricity that would heat all of Kyiv…” Rabbi Kaplan said.

The two friends began farbrenging together, and Rabbi Shur shared that the boy who had taught Jonathan “Torah Tzivah” was Mendel Gurary, today a shliach in Antwerp.

“It is truly breathtaking. You can make a child forget everything, but you cannot take away the footsteps that walked to the shul, the hands that embraced the siddur, and the mouth that said the possuk of Torah Tzivah,” one of the participants marveled.