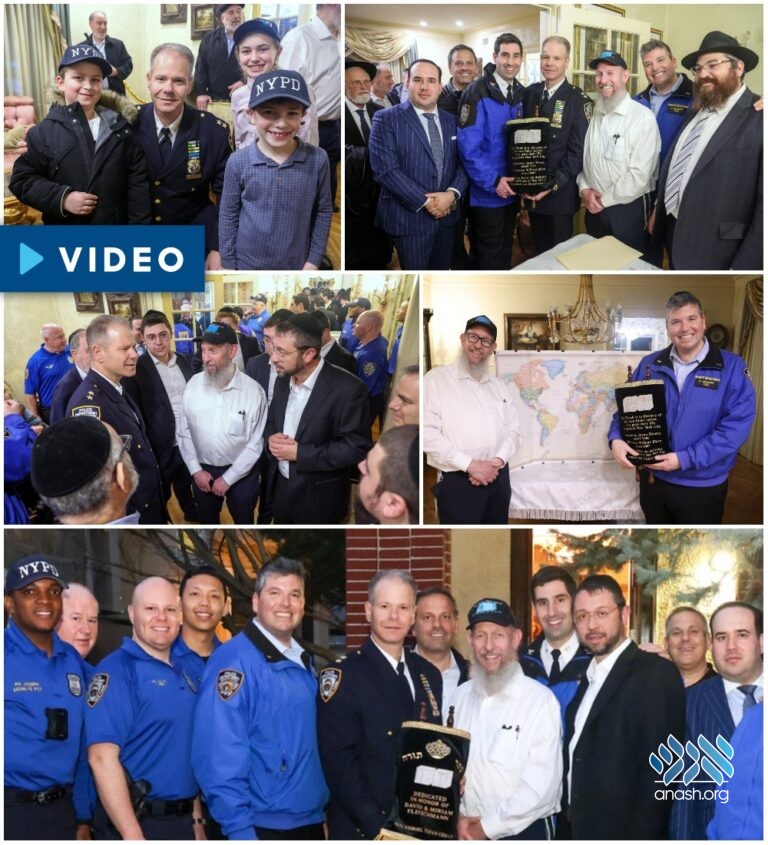 The Beis Yisroel Torah Gemach Free Torah Loan Society dedicated a Torah on Monday in memory of two police officers who were killed in the line of duty this year.

The Beis Yisroel Torah Gemach Free Torah Loan Society on March 7th dedicated a Torah to the two police officers who were killed in the line of duty on January, 21 of this year. The ceremony took place in Flatbush Brooklyn.

Bentzion Chanowitz who runs the gemach in conjunction with Rabbi Mendy Kotlarsky or Merkos suite 302 felt that it is important to show support and respect to the  New York City Police.

“We want the police to know that they are respected by us and that with today’s craziness, we support and honor them,” said Bentzion Chanowitz. “This is why we felt it is appropriate to put the names of the fallen police officers on the cover of the Torah, to memorialize them.”

This Torah was refurbished and made kosher to be used in services once again.

The Beis Yisroel Torah Gemach provides Torahs to synagogues around the world who need primary use Torahs, until a permanent solution is found. They presently have over 190 Torahs deployed all over the world on long term loan.

The Gemach works mainly with Chabad representatives who are starting out. Providing Torahs to new congregations allows them to grow and takes stress away from the rabbis so they can put more effort into servicing their community.

The Beis Yisroel Torah Gemach has dedicated other Torahs in memory of other police officers who have been killed as well as first responders and victims of terror.

High ranking officers from the NYPD Chief Michael M. Kemper, inspector Richie Taylor, lieutenant Ira Jablonsky and members of the Brooklyn South Community task force, as well as rabbis from the Flatbush area were present to honor and pray for the two police officers and to hope and pray that the killing does not happen again.

The Torah will be deployed and used by Rabbi Yehoshua Samuels in the Rockwood Park Jewish Center in Howard Beach, Queens.