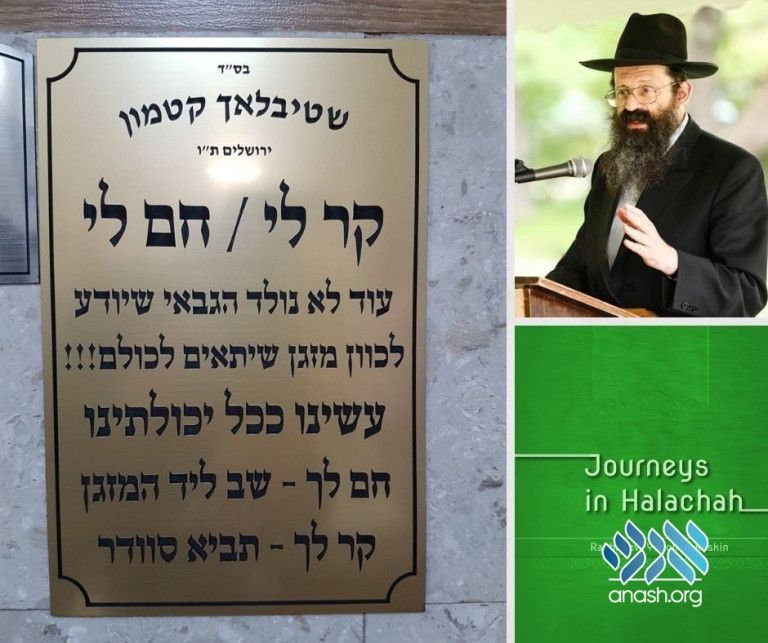 The desired temperature can sometimes become a source of squabble in shul. Who is right? A chapter from the new book, Journeys in Halachah, by Harav Levi Yitzchok Raskin.

I recently received an email from an acquaintance in Paris. He is getting older (our last conversation was about hearing-aids!), and his Shul has installed air-conditioning. The younger people want the temperature to be set at a [very] cool 19 degrees Celsius (66 Fahrenheit). The older regulars find that to be too cold. He asks: Is any truth in the well-known saying that the one who feels cold has the upper hand, because of the dangers inherent in catching a cold?

Unfortunately – I responded – I have searched but never found anywhere a blanket ruling [pardon the pun] that those sensitive to cold have priority over those who relish spending time in an icebox.

He does, however, recommend having – where possible – cooler and warmer areas of the Shul. In this way everyone can find their comfort zone, and not have to stay home or go elsewhere.

He then adds: “It is better to forgo sitting in one’s mokoim kovua [fixed place] than imposing discomfort upon others.”

Which brings me to address the concept of having a fixed place in Shul. This value has two main aspects: 1) Ethically, we are enjoined to have a set place in Shul; 2) Historically, in many communities one could purchase a place in Shul. This ‘real estate’ could have even been bequeathed to an heir:

1) “One who has a set space for his prayers, the G-d of Avraham will stand to assist him” (Berochos 6b). This addresses not only in which Shul to pray, but also within that Shul, where about you will pray. There is flexibility of ‘four amos’, i.e. that one need not object to moving one or two seats over (Shulchan Oruch OC 90:19).

The simple rationale for this laudable practice is because each space has its’ distractions: The windows, the furniture, the neighbours, and whatever else. The novelty of those distractions tends to wear off once you’ve gotten used to that space, thus allowing you more focus on your prayer.

On a deeper level: Tefila is compared to Korbonos. Each Korbon had to be done in a designated space and in a specific manner. Similarly, our Tefilos endow their space with sanctity. Future Tefilos may glean inspiration from the holiness inherent in the space of one’s previous Tefilos (see Piskei Tshuvos O.C. ibid. para. 24).

2) In years bygone it was common practice to purchase seats in the Shul (see Ramo in Choshen Mishpot siman 162:7). Sitting on someone else’s seat could be seen as a form of Geneivah, especially when the owner is too shy to claim his place (Pischei Choishen, Geneviah, ch.6 n.2). However, this practice seems to be quite obsolete nowadays (Tzedoko uMishpot ch.11 n.28; Piskei Tshuvos siman 150 n.57).

[Clarification: The above is not addressing the widespread Minhag to purchase a seat in Shul for Rosh haShono and Yom Kipur. Curiously, this was referred to as buying “a Shtot” (a ‘city’) – see Minhag Yisroel Torah (siman 581:21). Indeed, in some communities, their primary fundraising is from the sale of seats for Yomim Noiroim].

I write this to address a worrying behavior that I have observed occasionally:

A visitor comes into a Shul and takes a seat in an empty space. A good while into Davening, a ‘regular’ of that Shul saunters in, and tells the visitor in no uncertain terms that they should move over, “because it’s my mokoim kovua”.

To which I say:

A) Praying anywhere within your original four amos is still called praying in your mokoim kovua;

B) If you never purchased this space, then you have no claim of Mokoim Kovua to oust anyone else;

Having gotten that off my chest, I would still encourage other regulars: if you are aware of the likelihood of the above scenario developing, then quietly advise the visitor where to sit, in a way that they will not suffer indignity later on.

A final word to the said latecomer: by adhering to your space for Davening you may be invoking the merit of Avrohom Ovinu. How much more would you be emulating Avrohom Ovinu’s life and values, by extending hospitality to travelers?

A chapter from “Journeys In Halocho” by Rabbi Levi Yitzchok Raskin, Dayan of the Lubavitch Community, London. Buy the full book here.