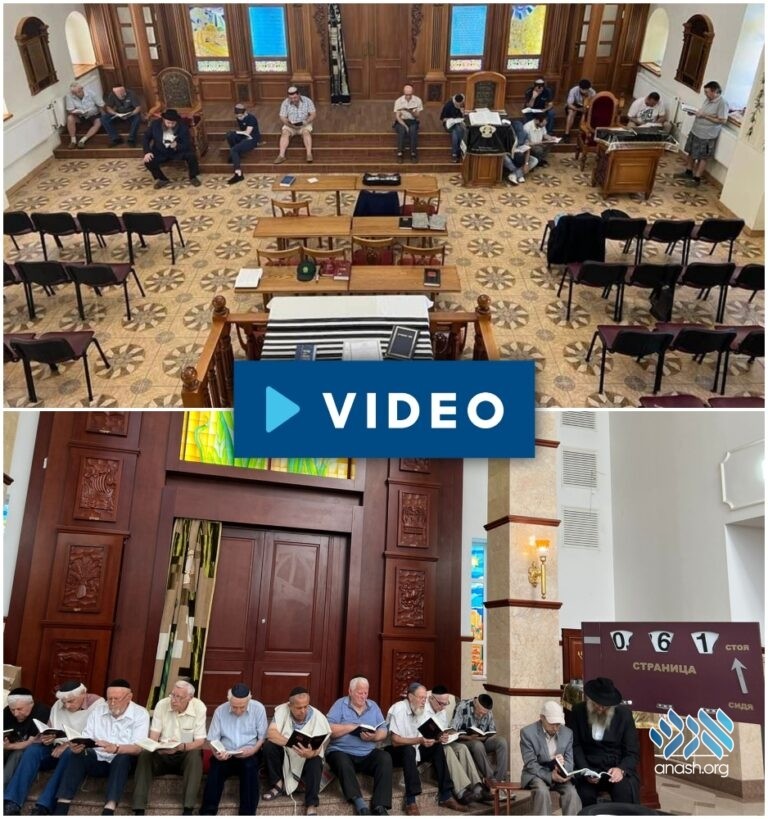 As Russia continues shelling Ukrainian cities, Yidden gathered in shuls to commemorate the destruction of the Batei Mikdash, led by the shluchim who had returned to their communities.

Together with the mourning for the churban, the Ukrainian Jews also mourned their personal tragedy – the destruction of much of Jewish life in the country, and the loss of many Jewish lives due to the senseless war.

“This time Tisha B’av took on an additional meaning,” said one of the shluchim. “There are shul in the country that have become desolate since the war broke out. Even the shuls that are still functioning are not operating at nearly the same capacity as they used to.”

“On the other hand, the fact that the Jewish ember is still burning here despite everything that happened and is still going on, can only be described as a miracle,” he said.

In Zaporizhzhia, which made headlines a number of times during the war due to Russian attacks on the local nuclear plant, only 17 Jews came to hear Eicha at the local shul and Chabad House.

“Last year there were 70 Jews here on Tisha B’Av,” says shliach Rabbi Nachum Ehrentreu. “This year, with constant alarms, and even a few recent shellings in the city, the situation is totally different.”

Even in Russian-occupied Kherson, where fierce fighting is still taking place, Yidden came to mourn the destruction of the Batei Mikdah with shliach Rabbi Yosef Wolff, who serves as the citty’s rabbi.

The paroches on the aron kodesh was moved to the side, and the white tablecloths covering the tables were removed as well, as is the Jewish tradition on this sad day. Just over a minyan of Yidden came to the shul for Eicha and kinos.

Yet, despite all that is taking place, shluchim across Ukraine are already preparing for the upcoming start of the school year and the month of Tishrei, planning to provide physically and spiritually for the Yidden who are still in the country.