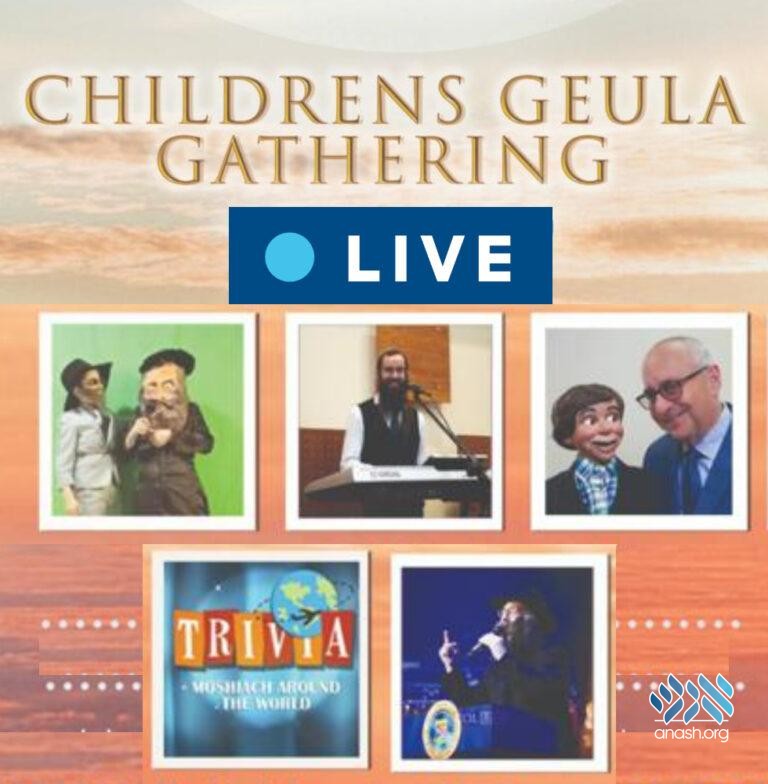 Join Live on Thursday at 2:00 pm ET: A Pre-Purim children’s gathering for the geulah will feature Rabbi Shimmy Weinbaum, Chuck the Ventriloquist, Rabbi Yoey Muchnik the one-man band, a trivia game with Rabbi JJ Duchman, The Leeds boys, and more!

Over two thousand years ago, on the first Taanis Esther, the Jewish people heeded the call of Queen Esther to unite in fasting and prayer for three days and nights, to avert Haman’s death decree against the Jews. Mordechai took this opportunity to gather thousands of Jewish children in study and prayer. Our Sages say that it was this gathering of the 22,000 children that began the unfolding of Salvation.

Using the same tools as Mordecai and Queen Esther to unleash Hashem’s mercy, we know that Torah study and prayer will hasten the arrival of Moshiach, especially when done by the children.

To this end, on Taanis Esther February 25th, at 2:00 pm EST, there will be a LIVESTREAM video for children. It will feature Rabbi Shimmy Weinbaum, Chuck the Ventriloquist, Rabbi Yoey Muchnik the one-man band, a trivia game with Rabbi JJ Duchman, The Leeds boys, and more!

This will be available for viewing at www.childrensgeulagathering.org.

This Taanis Esther gathering will begin a 40-day campaign of opportunity to make more and more Children’s Geula Gatherings gatherings of Torah, prayer, and Tzedaka officially lasting until a few days after Pesach, 24 Nissan, April 6th.

Mrs. Tiferes Cahman, was Los Angeles, California, the founder of the Children’s Geulah Gatherings, implores us to utilize this opportune time. “The situation in the world today is in such urgent need right now. We know what can change everything. All it takes is copying Mordechai. He knew the secret to redemption, uniting Jewish children in Torah and prayer. We have the opportunity now, to do the same and bring salvation to our world.

Over the past two Children’s Geulah Gatherings, 60,000 Jewish children of all backgrounds have joined in this global project! With your help, we will once again meet or exceed our goal of 22,000 children by joining participants from organizations including Torah Umesorah, Tzivos Hashem, Shuvu Schools, Jewish Girls Unite, Power of Unity, and ATARA.

This campaign is inspired by the Lubavitcher Rebbe who implored many times that there be gatherings of children mirroring Mordechai’s gathering, to annul the Hamans of the modern-day.

So, how do you make a Children’s Geula Gathering? It can take place in your home, school, shul, and virtually. Big or small, every gathering counts, even if it’s just with your own kids or done over zoom. Simply, gather the children together, say/sing pesukim of Torah, sing/recite prayers and give Tzedaka. Empower them by telling them that they are part of a worldwide children’s gathering of 22,000 children and just like Mordechai’s children, they too can bring the Geula!
End off with singing, dancing, or a project.

The CGG has also prepared beautiful resources for you to choose from including an inspiring original song about the children of the Megillah in English, Hebrew, and Yiddish, a learning booklet, a Mitzvah pledge raffle, and a Welcome Moshiach art collection/raffle, and more!

For more resources and register your gathering: www.childrensgeulagathering.org.

For sponsorship opportunities, go to https://thechesedfund.com/childrensgeulagathering.

Do not miss this opportunity to enrich your children and help bring Redemption to the entire world!