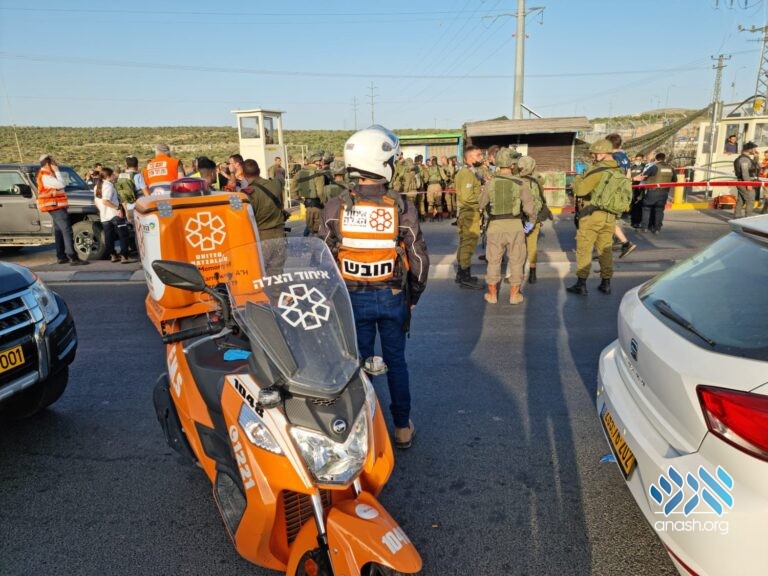 Three Israeli civilians were injured, two of them seriously, in a drive-by shooting at a bus stop near Shomron. A search is underway to locate the terrorists.

Three people were injured, two of them seriously, in an apparent drive-by shooting at a bus stop near the Tapuah Junction, east of the city of Ariel, in the Shomron.

Medics said one of the victims was in critical condition and was receiving CPR, while the second seriously injured man was in and out of consciousness. The third sustained light injuries.

Reports indicate the attack was a drive-by shooting directed at a number of young people standing at a bus stop. The victims were all civilians.

IDF forces are currently in pursuit of the terrorists, who fled the scene in their vehicle immediately after the shooting attack.

Following the shooting, Israel’s Defense Minister Benny Gantz said “the IDF and security forces will not rest until they get their hands on the terrorists who carried out the attack.”

Earlier on Sunday, a terrorist attack was foiled in Gush Etzion, south of Jerusalem, when Israeli security forces shot and neutralized a female terrorist who attempted to carry out a stabbing attack.

The renewed terror attacks came as Israel observed a national day of mourning on Sunday in honor of 45 people who perished in a stampede in Meron during Lag B’Omer, the country’s biggest civilian disaster.