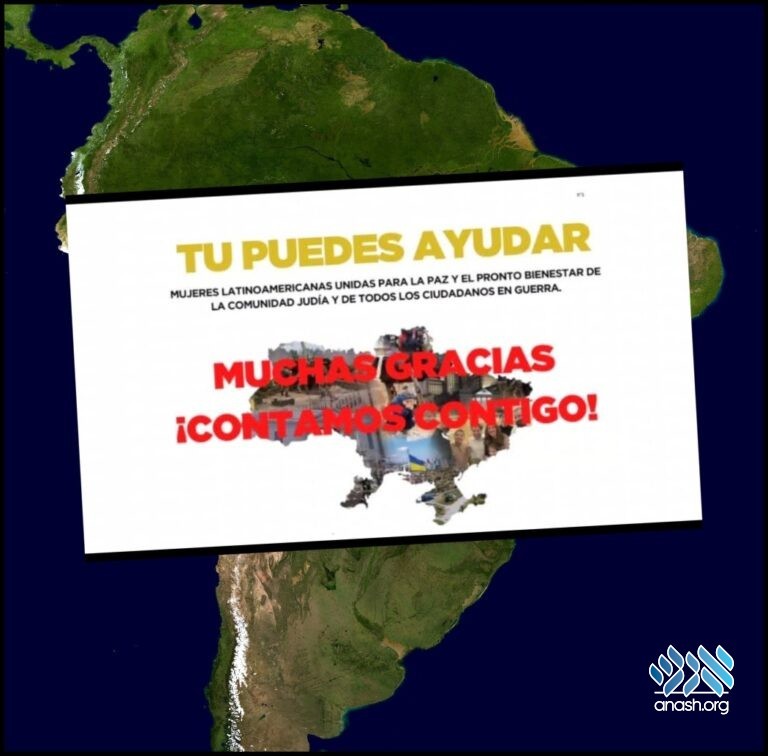 “What can we do to help?” As the world watches the war unfold in Ukraine and the destruction it wreaks, Yidden turn to each other and ask, “How can we help?” Three sisters, shluchos living in Spanish-speaking countries, came together to take matters into their own hands to do what they could to help.

It began with a WhatsApp group; the shluchos immediately sprang into action, dividing the rally’s arrangements. One shlucha translated a video of the Rebbe into Spanish, another organized the speakers, and Rabbi Chai Kohan of the Spanish Desk of Merkos 302, provided the marketing and logistics.

Beginning the event was a video of the Rebbe where the Rebbe emphasizes the importance of adding in Teffilah and Ahavas Yisroel during a time of distress and how this will bring the time of ultimate peace, Moshiach.

“We have to strengthen ourselves. We have the power to change what is going on through doing Torah, Tefillah, and Tzedakah,” said Rabbi Moshe Kotlarsky, Vice Chairman of Merkos L’inyonei Chinuch. He illustrated the impact every individual has. “Imagine if every Jew did this, and called on ten friends to do the same, the impact we can achieve.”

Rabbi Kotlarsky then shared some of the hardships the shluchim of Ukraine were experiencing. “Some of them are literally left with only the shirt on their back,” he said. He became emotional as he told the story of a shliach in Zaporizhzhia, Ukraine, who was miraculously saved from a bullet fired by a soldier in the city.

Rochel Levitansky, Shlucha to Sumy, Ukraine, described the chaos happening around them. “The aisles in the supermarkets are empty. My husband is going around giving food to Jews around us who are unable to leave,” she said. Frayda Levitansky, six years old, came on with her mother and sang a song of emunah and bitachon, showing their strength in this turbulent time. “We have the Tehillim to protect us. Please don’t stop saying Tehillim for us,” begged Mrs. Levitansky. Update: Baruch Hashem, with open miracles, the Levitansky family escaped Sumy and are currently in Israel—a testament to the power of the Tefillos said for them.

Following those words, Mrs. Etti Silberstein led all the participants in saying a few chapters of Tehillim. Next, Mrs. Chanie Rosenblum spoke emotionally about the ability to help with Tzedakah, as each person in their own home gave Tzedakah.

At the conclusion of the event, all unmuted, everyone demanded, “Queremos Moshiach ya—we want Moshiach now!”

To support the Shluchim of Ukraine and Chabad’s relief efforts, reach out to the Ukraine Jewish Relief Desk at Chabad Headquarters: [email protected] 718-977-5503 UkraineJewishRelief.org