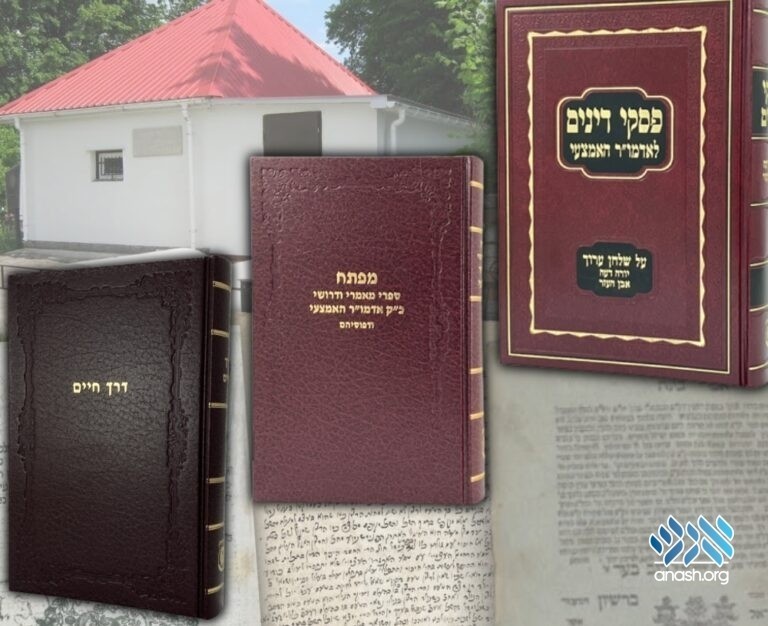 Coming on the heels of celebrating the birth, yahrzeit and chag hageulah of the Mitteler Rebbe, Kehot Publication Society has announced the recent publishing of three books by and about the Mitteler Rebbe — bibliography, Halacha and Chassidus

Coming on the heels of celebrating the birth, yahrzeit and chag hageulah of the Mitteler Rebbe, Kehot Publication Society has announced the recent publishing of three books by and about the Mitteler Rebbe — bibliography, Halacha and Chassidus

One of the first activities of the Mitteler Rebbe after the passing of his father, the Alter Rebbe, was preparing his father’s works of Chasidus and Nigleh for print, and subsequently publishing them. After printing the Tanya, Shulchan Aruch and other works of the Alter Rebbe, the Mitteler Rebbe began publishing his own works, Sharei Teshuva, Derech Chaim, Imrei Binah, Toras Chaim and others.

The Rebbe often spoke of the great flow of Chasidus that emanated from the Mitteler Rebbe, both in style and volume — his discourses were expansive and more detailed than his father’s and the sheer number of maamarim, more than 800 discourses, was staggering. Unlike the Alter Rebbe who did not commit his discourses to writing himself (other than Tanya), the Mitteler wrote his own discourses.

Cataloging and indexing the massive output of the Mitteler Rebbe is an unenvious job. Thanks to the tedious and phenomenal work by veteran Kehot scholar and editor, Rabbi Alexander Zissel Piekarsky, such a volume, Mafteich Sifrei Maamarei vDrushei Admur Haemtzai uDefuseihem, is now available for the scholar and layman alike.

An Overview of the Mitteler Rebbe’s discourses.

An annotated chronological and alphabetical listing of all his published Chasidic discourses.

An index of towns where each of the discourses were recited.

A comprehensive bibliography of all the published books authored by the Mitteler Rebbe.

A list of discourses the Mitteler Rebbe delivered during the lifetime of his father, the Alter Rebbe.

The Mitteler Rebbe wrote particular seforim which the Rebbe encouraged us to study during different times of the year — Shaarei Orah for Chanukah-Purim, Shaar HaEmunah for Pesach, Derech Chaim for the month of Elul and Ateres Rosh for Rosh Hashanah and Yom Kippur.

The new redesigned edition of Derech Chaim, has been thoroughly proofed and edited, large paragraphs have been shortened to more bite-sized lengths and commas and periods have been added. New indices, annotations and glosses serve to cross reference the ideas throughout the entire body of Chasidus Chabad. The editorial work was done by Rabbis Mendel Mishulovim and proofed by Rabbi Chaim Wilhelm. A comprehensive synopsis of each of the book’s chapters, skillfully created by Rabbi Yisroel Olidort, grace the first forty pages of the sefer.

In a new edition of Piskei Dinim by the Mitteler Rebbe, the former slim volume has morphed into a beautiful, 944 page book.

Piskei Dinim, which contains Halachic summaries and commentary on the Shulchan Aruch, is the only surviving work of the Mitteler Rebbe on Halacha and Talmud.

The first part covers chapters 32-57 of Yoreh Deah. The second part is on Even HaEzer, Laws of Divorce, Chapters 119-151.

“The Rebbe has often recounted the Mitteler Rebbe’s expressed wish and desire that when a chasid encounters a fellow chasid, their topic of conversation should be sublime concepts of Chassidus,” says Rabbi Yosef B. Friedman, director of Kehot. “This recent flurry of activity by Kehot editors and supporters, will hopefully add momentum and energy to this sublime wish.”

The new seforim are available online at Kehot.com.