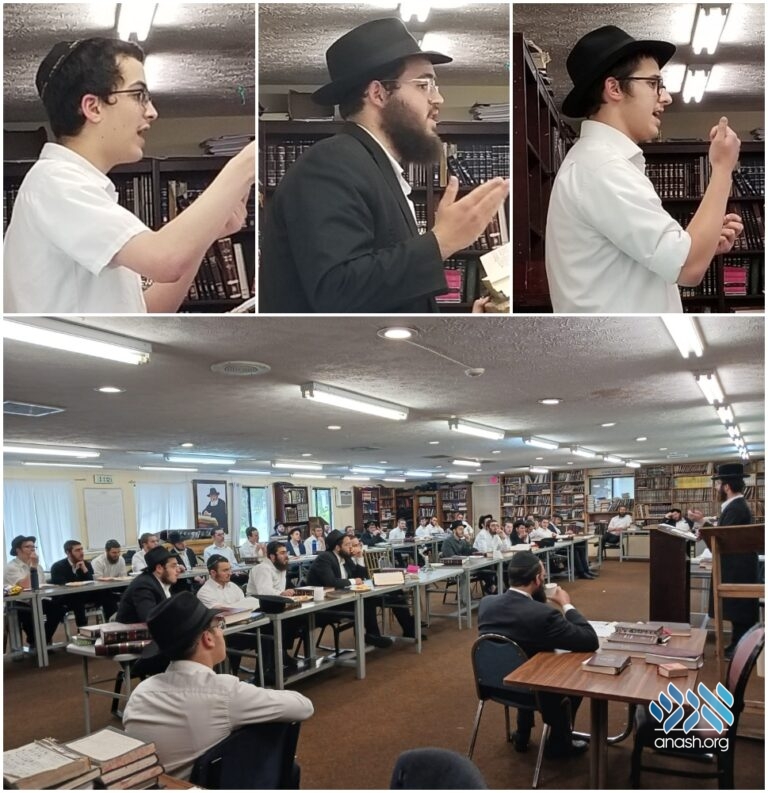 Two months of in-depth study of Gemara and poskim in the Poconos Zal culminated in a three-part Kinus Torah, where nearly 30 bochrim shared a “vort” on a sugya and its halachic ramifications.

In the Poconos zal, two months of in-depth study of the Gemara, commentaries, and poskim on the topic of “shehiya and chazoro”, i.e. the use of a stove or oven on Shabbos, culminated in a three-part Kinus Torah, where bochrim shared a “vort” on the Gemara, Rashi, Tosafos, meforshim and the Alter Rebbe’s Shulchan Aruch.

The first part was held Thursday, Chof Daled Sivan, and the second and third parts followed on Tuesday and Wednesday, Chof Tes and Lamed Sivan. The kinus was emceed by hatomim Motti Smith, who opened with a story told by Harav Yaakov Landa a”h regarding the extreme extent of stringency with which these halachos were kept in Bais Harav.

In the Poconos, this is the first Kinus of its kind, including so many bochrim, and focusing on one topic. The participants were visibly pleased.

“It is obvious that the bochrim are immersed in this sugya. It is beautiful to see that so many bochrim have a real talent to teach Torah clearly and deeply”, exclaimed Rabbi Shmuel Newman, a mashpia in the yeshiva.

The kinus included the following speakers:

After the third part of the Kinus, bochrim traveled to Crown Heights for Shabbos Gimmel Tammuz, and will return after Shabbos to continue studying for an additional month, another unique feat of the Poconos yeshiva.