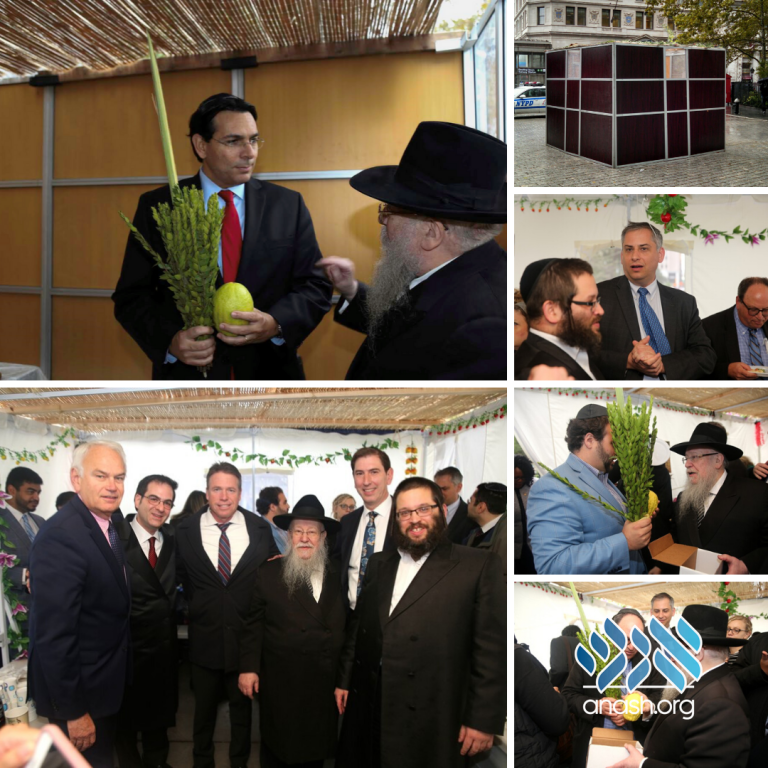 Thousands of Jews from all walks of life visited the Sukkahs of the Lubavitch Youth Organization at the busiest places in New York City, in the famous Folly Square near the Federal Courts, the Macy’s Sukkah near “the World’s Largest Store” at the intersection of Avenue of the Americas, Broadway and 34th Street, the Wall Street Sukkah in the World Financial Center, as well as the International Sukkah at the Isaiah Wall across from the United Nations.

All of this is in addition to the “City Hall Sukkah” as reported before.

At the sukkos, respected lawyers could be seen catching a few moments for lunch before hurrying back to their prestigious offices. Nearby, for example, a prominent contractor sat next to a real estate broker, completing their conversation as they grabbed a bite in the sukkah. Alongside were Chassidim who had to be in the city during the holiday to take care of affairs that would otherwise lead to a loss, and tourists visiting New York who sought a sukkah where they could eat their meal.

“This is in the spirit of the Rebbe of bringing the Sukkos to the people” said Rabbi Shmuel Butman, Director, Lubavitch Youth Organization.

The Sukkah right in front of the UN building is in accordance with the Rebbe’s remarks to Prime Minister Binyamin Netanyahu, then Israel’s ambassador to the UN. “Remember, you are in a hall where there is complete darkness, if you light a small candle of truth, the light of the candle can be seen from a far distance.”

“I am delighted to be here today in this Sukkah and I very much appreciate the wonderful work of Chabad for all Jews in the entire world,” said Danny Dayan, New York’s Consul General of Israel who visited the International sukkah.

Rabbi Butman emphasized the strategic importance of this unique position: “We are right here in front of a building where the Holocaust destruction of the Jewish people has been denied, and now seek to deny the Jewish people’s connection to the Holy City of Yerusholayim. Let the eternal ‘Succas Sholom’ — The Succah of Peace, counter-balance all the rhetoric and diatribes from across the road and bring peace, real peace, genuine and authentic peace, between nation and nation and between man and man.”

Many families taking their young children on Chol Hamo’ed trips brought them to visit the sukkah. “Now I don’t need to worry about where to give my children food,” said one happy mother. “Chabad has already taken care of it for us.”

Pairs of Chabad yeshiva students covered many city neighborhoods, working with typical Chassidic enthusiasm to bring the mitzvah of lulav and esrog to many thousands of Jews. “This is an integral part of the Rebbe’s activities expressing his concern for every Jew, wherever he is,” noted Rabbi Yossi Butman, who organized the Sukkos activities for the  Lubavitch Youth Organization, together with a team of Chabad yeshiva students who worked energetically to ensure the activities’ success.