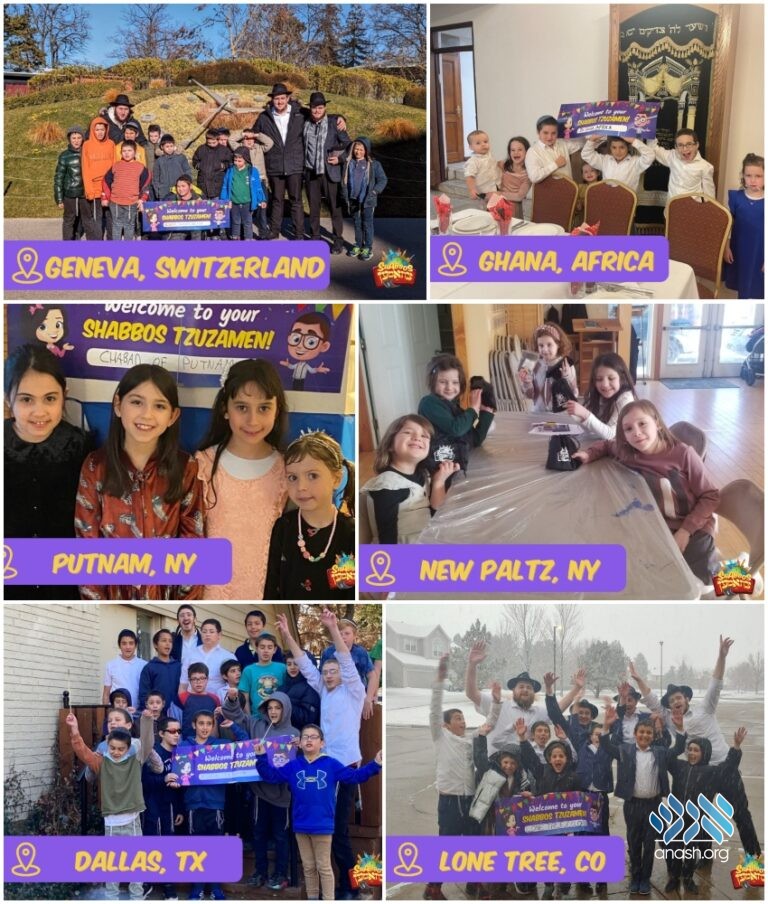 Shabbos Tzuzamen, an initiative from MyShliach that saw over a thousand shluchim’s children across the world come together in nearly a hundred individual locations for regional micro-Shabbatons.

Shlomo Kopel, Mordechai Dovid, and Moshe Tzvi Shvarzbord, ages 11, 8, and 6 respectively, are Lubavitcher boys like thousands of others across the globe. But unlike most, they don’t usually get to spend much time with other Lubavitch boys their age. That’s because they live on shlichus in Geneva, Switzerland—not exactly a bustling Jewish metropolis. For almost twenty years, their parents, Rabbi Avrohom Pesach and Rochel Chana Shvarzbord, have been working tirelessly to bring Yiddishkeit to this fabled European city.

So when Shlomo Kopel accompanied his mother to the train station to drop off his guests from the weekend they enjoyed together, it was no surprise that he exclaimed, “Mommy, what are we going to do next Shabbos?”

A good question indeed. You see, Shlomo Kopel had just participated in Shabbos Tzuzamen, an initiative from MyShliach that saw over a thousand shluchim’s children across the world come together in near a hundred individual locations for multiple regional micro-Shabbatons.

The brainchild of Rabbi Shaya Itkin of MyShliach, the Shabbos Tzuzamen in Geneva, along with the many others, was the climax of weeks of effort and planning that Baruch Hashem, exceeded everyone’s wildest expectations.

“When MyShliach sent out the message about the Shabbaton and asked who was willing to host, I immediately jumped at it,” said Shvarzbord. “My kids are here all year, and the idea of getting together with other young shluchim’s children nearby locations was such a welcome opportunity. Sure enough, the entire weekend was incredible; my kids simply loved it!

“Every Shabbos, my kids run around in shul, and the youngest boy doesn’t necessarily stay inside the entire time. But this Shabbos, he was there for sure—he didn’t want to miss a moment with his new friends! And then to see them all learning Chassidus together on Shabbos morning from the pamphlets MyShliach sent us was so beautiful.”

A quirk of their unique European locale at the crossroads of different countries, the twelve boys who joined together spoke four different languages: English, French, Hebrew, and Italian. But that didn’t seem to pose any challenge to the boisterous group as they meandered about the streets of Geneva Friday afternoon on mivtzoim. “The boys were joined by three bochurim that MyShliach arranged, one from France and another two from Italy. Between them, they covered all languages, and the kids had such a fun time with them over the weekend.

“On Motzei Shabbos, during the melaveh malkah, one of the Italian boys wanted to say a dvar Torah and was struggling to say it over in Hebrew. One of the bochurim quickly stepped in and encouraged the boy to say it in Italian, and he translated it into Hebrew. All in all, the boys communicated with each other fabulously with a common language of Hebrew, and were singing and dancing the entire weekend. They had such a great time!”

After such a high, is it any wonder, then, that Shlomo Kopel is wondering what’s going to be next Shabbos?

Rabbi Yudi and Dvori Steiger of Park City, Utah, echoed the Shvarzbord’s experience as they hosted children living over a six-hour drive away. “The Shabbaton was incredible from beginning to end! From the box we got in the mail full of things that were perfect for every age, to the bochurim, the Motzei shabbos zoom event, the attention to every detail–the boys had such a wonderful experience!! Our three families mixed together so nicely, and everyone was fully into it! The boys are counting down the days to the next Shabbaton!”

The sweeping impact of so many get-togethers is obvious: thousands of shluchim’s children now know they are not alone or isolated. Baruch Hashem, there are so many others like them—and right next door. Perhaps more importantly, the fact that they’re right next door lends a sense of continuity to this project, as they can relatively easily get together once again. Many of the locations even undertook Hachlatos to be “Tzuzamen” more often. Indeed, the Whatsapp group is still quite active, and the children are clamoring for more.

“The Rebbe always spoke about the concept of איש את רעהו יאמר חזק, that chassidim should strengthen each other,” said Rabbi Moshe Kotlarsky, Vice Chairman of Merkos L’inyonei Chinuch. “Young shluchim are the Rebbe’s Special Forces to bring Moshiach, and they need particular chizuk from one another. To be a part of bringing so many of them together and bring such chayus to their routine is a real zechus, and we only hope that the friendship and positive hachlatos continue for a long time.”

“Shabbos Tzuzamen” was sponsored by Reb Shmuel and Yiska Aisenberg.