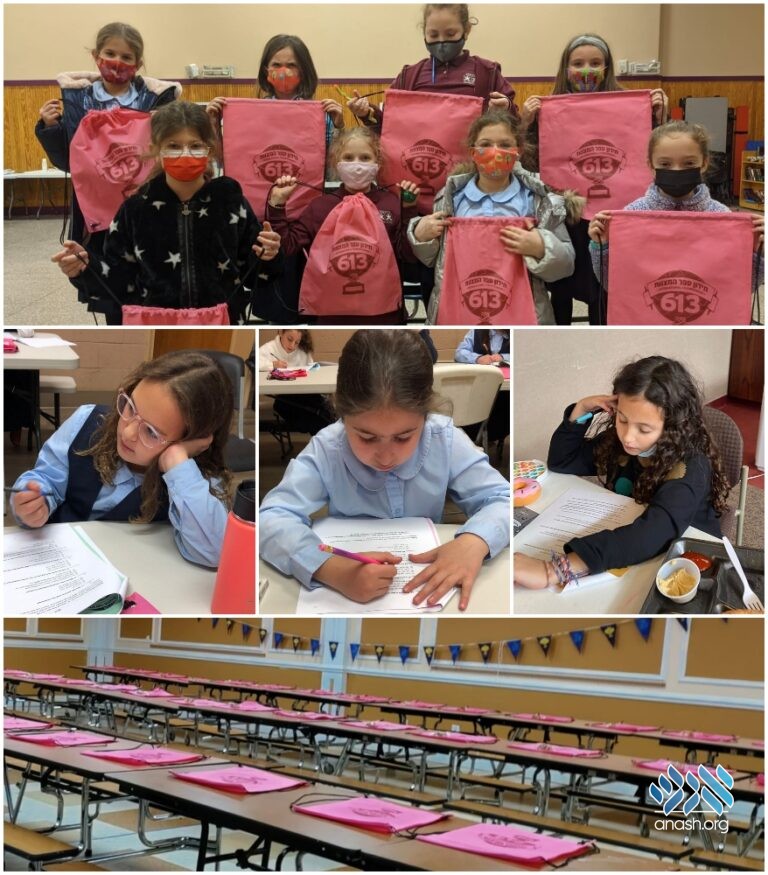 The Sara Rohr international Chidon Sefer Hamitzvos Championships has boomed this year, with over 6000 children still in the race as the second test approaches. Girls in tens of schools around the world are hitting the books to prepare.

N’Shei Readers: Click here for a full gallery of tests taking place in schools around the world.

The Sara Rohr international Chidon Sefer Hamitzvos Championships has boomed this year, with over 6000 children still in the race as the second test approaches. Boys in tens of schools around the world are hitting the books to prepare.

“The secret behind this year’s success,” says executive director of Tzivos Hashem Rabbi Yerachmiel Benjaminson. “is the new Yesod, Yedia, Havana & Iyun tracks. Giving  children on different academic levels a way to succeed. With the four tracks we will truly accomplish our goal of every child every Mitzvah”

After test one, there was much discussion at Headquarters. Would children just opt for the easier track, says Chidon Director Rabbi Shmuel Bronstein. “To our amazement there were over 1000 children who got over 90% on the highest track”.

Byond what all the incredible benefits of the chidon. The chidon has kept my child busy, says a Parent. While one of my children is doing the first track and learns for 15 minutes a day the other is taking the 4th track and putting in an hour each day.

“The average chayol put in at least 20 hours preparing for this test, says Rabbi Moshe Kotlarsky, Vice Chairman of Merkos L’inyonei Chinuch. “That’s over 100,000 hours of learning just for test one. I can only imagine the Nachas Mrs. Rohr obm is having on high.”

“I have been learning with my child each night,” one proud father told Anash.org. “I have learned so much. There are so many details that the children need to remember. Originally my daughter was going to try and go for the Havono level. After getting her results back from test one, she is motivated to go for the Iyun level and compete for a trophy!.”

“When the Rebbe recruited the children to Tzivos Hashem, it was for a reason,” says brigadier general of Tzivos Hashem Rabbi Shimmy Weinbaum. “The Rebbe wants to foster Kabolas Ol. The Rebbe used the words ‘induce the children to accept upon themselves a system of discipline and obedience to rules without coercion.’ And this is what the chidon has truly accomplished. It has induced thousands of children to learn for so many hours in their spare time.”

At Headquarters we are constantly looking for more ways to motivate the children. This year we added test prizes for each of the 4 qualifying tests. says director of Operations, Rabbi Mendel Wolowik. However the true motivation comes from the amazing  base Commanders around the world.  “It has been an amazing experience to work with so many different schools. They all have different needs, but at the end of the day, they all have one goal – for every child to be taken care of.”

“We get many messages a day from different schools around the world,” says Moussie Feller. “There is one thing in common with every email and WhatsApp message: Each and every base commander is so dedicated and wants the best for their chayolim.”

It’s truly an army of soldiers preparing for the time when we will actually be able to keep all 613 mitzvos and these soldiers will surely lead the way.