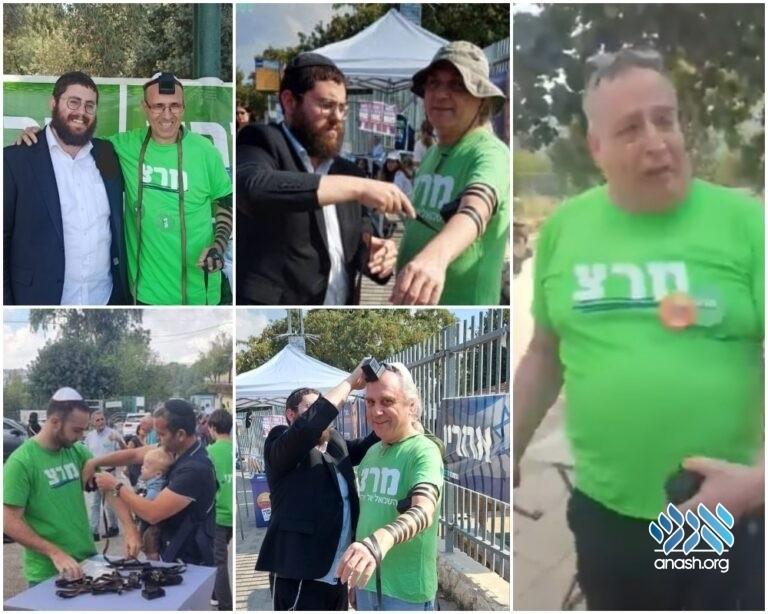 As Election day in Israel is a holiday, with most businesses closed to encourage voting, Chabad Chassidim utilized their vacation and the hundreds of thousands of voters congregating by the polls for a mass Mivtza Tefillin.

But at one Tefillin station, things took a negative turn when a man wearing a Meretz shirt was filmed desecrating a pair of Tefillin at a Chabad Tefillin stand at a voting booth in Netanya.

The incident occurred Tuesday morning outside of a voting station at a school in the coastal city of Netanya, when a 61-year-old local man and Meretz activist approached a stand set up by members of the Chabad movement.

Rather than wear the tefillin, as the men operating the stand had offered, the suspect degraded the Tefillin by rubbing them against his body, while the volunteers shouted at him to stop.

Shortly afterward, police arrested the suspect. A police spokesperson said the man is being investigated on suspicion of “offending religious sensibilities.”

Chabad released a statement following the incident in Netanya: “To our delight, since the morning hours, thousands of Jews from all over the political divide rolled up their sleeves and put on tefillin. The incident in Netanya is very unfortunate, but we believe that the tefillin belong to everyone regardless of their political opinion.”

The incident caused an outcry from political leaders across the spectrum.

“A disgrace has been done in Israel! A Jew desecrating tefilin in the holy land! Our answer will be a huge protest at the election booth,” Shas leader Aryeh Deri said.

“I am shocked to the depths of my soul, with tears on my face,” Religious Zionist leader Betzalel Smotrich said. “I am crying over this, the persecution and hatred of Judaism that this hateful government brought with it.”

“Make it be known without a doubt, I condemn this aberrant behavior and it opposes our worldview,” Meretz party chairman Michal Rozin said. “The man is not known to any of the Meretz activists and is apparently an imposter who is trying to harm the party,” Meretz said in an official statement.

“This is Meretz,” she wrote.