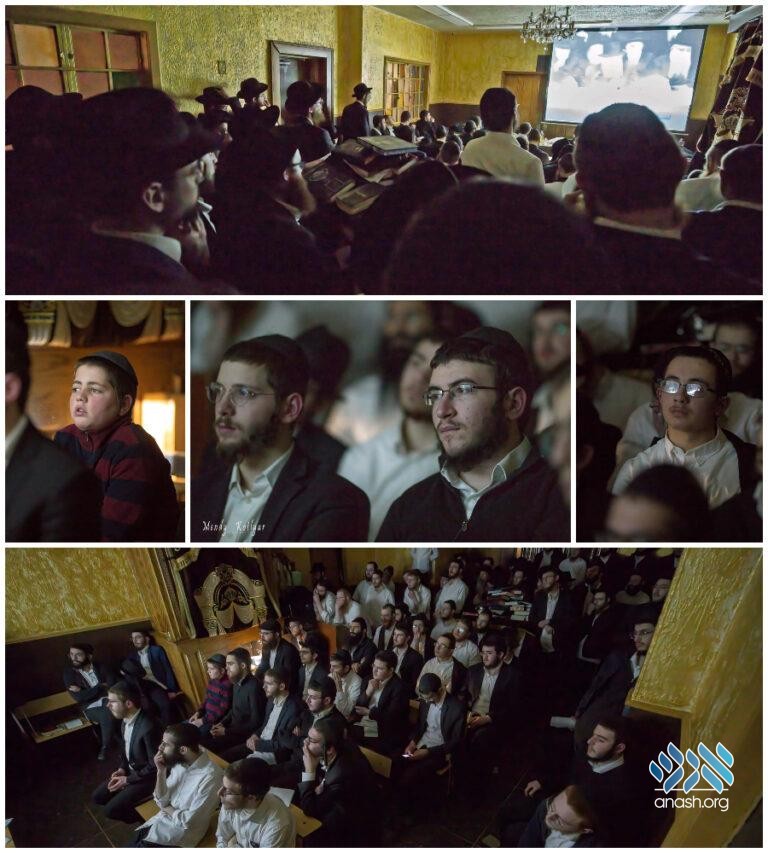 One afternoon in 770, a group of friends decided to begin screening a full farbrengen of the Rebbe every week. 13 years later, the project has not only kept up, but keeps on growing stronger by the year.

When a group of friends in 770 began to screen a farbrengen of the Rebbe in the small zal, they did not expect that over a decade later it would not only be continuing, but growing stronger year by year.

For many years, a short clip of the Rebbe was shown in 770’s small zal on a nightly basis. With each video capped at a maximum of fifteen minutes, the videos were just short snippets from the Rebbe’s lengthy farbrengen, which ranged from three hours in length to over seven hours.

One week, a group of friends decided that the short videos just weren’t enough. They decided that they wanted to give bochurim the opportunity to watch full farbrengens of the Rebbe on a regular basis. So they set out to make it happen.

Two bochurim from the group, Sholom Ber Kratz and Mendel Goodman, approached JEM and asked if they would agree to give them a video every week to screen. When JEM happily agreed, they began advertising the video in 770 and showing a different farbrengen every Thursday night.

“At the beginning, the crowd was very small, numbering less than ten people at times,” Kratz told Anash.org. “But as time went on, more people heard about the weekly video and the crowd slowly grew.”

The two weren’t satisfied with just showing a video every week. Every Thursday, they would print out the full farbrengen from Sichos Kodesh or Toras Menachem and distribute it, allowing participants to study the farbrengen before or after the screening. They also managed to get a number of videos that had never been shown to the public and play them.

This week marked thirteen years since the project started, and the organizers said they had never imagined how much the project would grow.

“Every week, a large crowd shows up, including bochurim learning in 770, bochurim from Oholei Torah, and even married men and children from Crown Heights,” Kratz said. “In weeks before a Yomei D’pagra, the room is even more packed, with almost no room to move.”

Organizers say that they have no plans of slowing down, and the weekly video will continue, and even occasionally surprise with a pirsum rishon. All bochurim, guests and men of Crown Heights are welcome to join and watch a farbrengen any week they so desire.

“A special thank you goes to Rabbis Elkanah Shmotkin and Mendel Gourarie from JEM, who make this possible, and Rabbi Zev Cadaner who sponsors the weekly printing,” Kratz says.