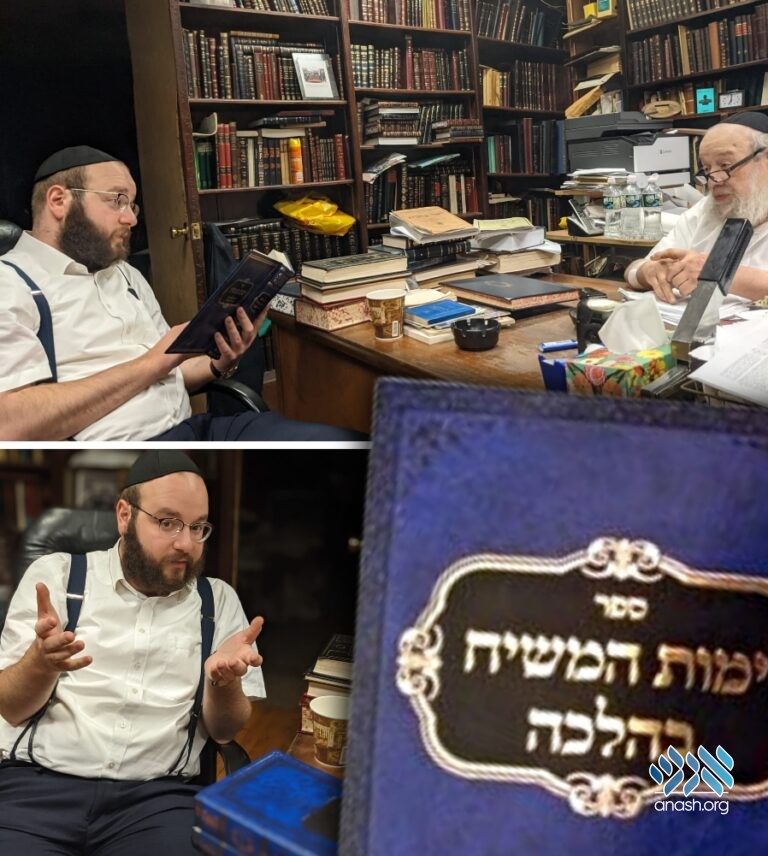 The third volume of Yemos Hamoshiach B’Halacha, a encyclopedic work by Rabbi Avrohom Boruch Gerlitzky on Moshiach and Geulah, got a boost towards its publication with Hatomim Shmuel Butler taking charge to see the sefer to completion.

The third volume of Rabbi Avrohom Boruch Gerlitzky‘s encyclopedic work on Moshiach and Geulah is set to come out in the near future, following years of hard work and to the delight of his thousands of students.

Ever since the Rebbe began encouraging the study of Inyonei Moshiach U’Geulah, Rabbi Gerlitzky began spearheading the study. Thousands of hao’oros on those topics were published in Hao’oros Ubiurim Oholei Torah, many of them authored by Rabbi Gerlitzky himself.

In 5765, Rabbi Gerlitzky published the first volume of Yemos Hamoshiach B’Halacha, a scholarly work which discusses and explores topics regarding Moshaich and the upcoming redemption. Many of the essays had been previously published in Ha’oros Ubiuirm, and others were written specifically for the sefer. A second volume was published 5771, and both were widely praised by Torah scholars from around the world.

In the years since the publication of the second volume, many eagerly awaited the publication of volume 3, but various delays caused the printing to be pushed off. Finally this week, a light could be seen at the end of the tunnel. Rabbi Gerlitzky summoned Hatomim Shmuel Butler, a bochur who is known to be able to take a project through to the end. Rabbi Gerlitzky asked Shmuel to take charge of producing the third volume and have it published at the first oppurtunity.

Shmuel gladly agreed to take the job, and the two immediately sat down to discuss the details of how to bring the long-awaited sefer to light. Sources told Anash.org that with the capable hands of Shmuel taking charge, the sefer is expected to come in just a few months.