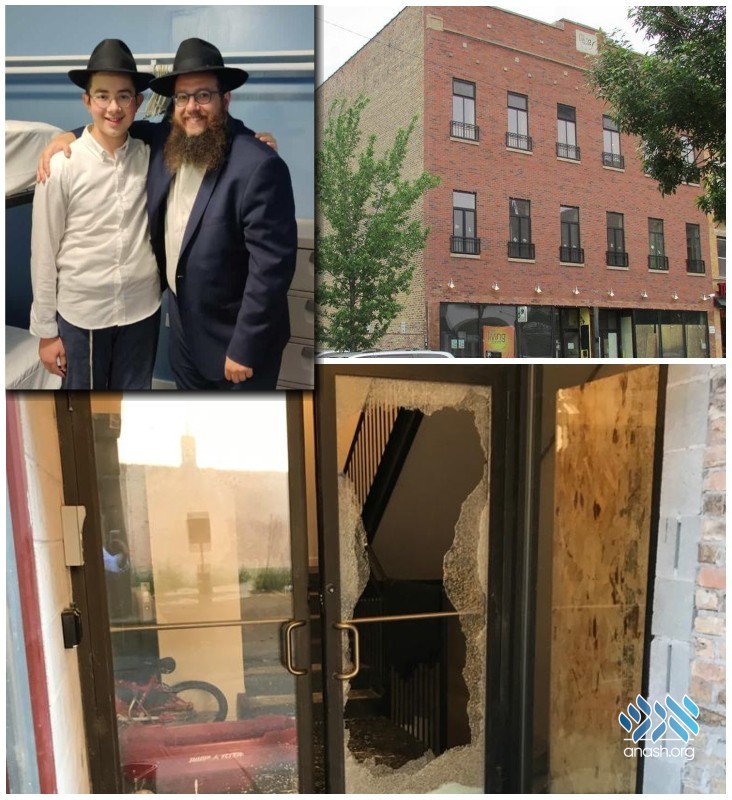 After the Chabad House and home of Chicago shluchim Rabbi Yosef and Sara Moscowitz was broken into and their childrens’ bikes were stolen, neighbors raised over $1,800 to purchase new ones and improve security.

On Monday, the schedule of Chicago shliach Rabbi Yosef Moscowitz, Executive Director of Lubavitch Chabad of Illinois, was full with plans to bring his son to yeshiva and Chabad activities. When he woke up that morning, however, he saw that there was an unpleasant surprise he had to deal with instead.

The Chabad House in the Bucktown neighborhood of Chicago is housed in a three story building called ‘The Living Room.’ Inside the building there is room for a shul, a hall for Chabad activities, and a floor where the shluchim live. Rabbi Moscowitz, together with his wife Sara, run programs for Young Jewish Professionals out of the building, including Shabbos dinners, classes and Yom Tov parties.

This past Sunday night, a group of thieves broke into the bottom floor of the building and stole the Moscowitz childrens’ bikes. To enter, the thieves shattered the glass doors at the back of the building.

“The back of The Living Room glass doors were broken into. Seems like it has become acceptable behavior in Chicago,” Mrs. Moscowitz wrote on Facebook. “The kids are super disappointed that their bikes were stolen”

Rabbi Moscowitz told Anash.org that based on the evidence, it seemed that it was a simple theft and not an antisemitic attack.

“It seems to simply have been a ‘Chicago-style’ theft, which is unfortunately becoming more and more common as time goes on,” he said.

Hearing of the theft and of the Moscowitz children’s disappointment, friends of the family set up a GoFundMe page to purchase new bikes for the children, and enhance security at the Chabad house. Within a short amount of time, the campaign reached over $1,800, with many donations coming from people the shluchim didn’t even know.

Shlucha Mrs. Moscowitz wrote a Facebbok post warmly thanking the donors, many of whom chose to remain anonymous.

“Anonymity is a funny thing. It can start with a faceless person breaking into our precious Chabad House/home. Causing fear and uncertainty, inconvenience and damage, financial loss and disruption.

“But then it blows my mind. Faceless folk very generously donating to the cause. Taking hard-earned money out of their own pockets and selflessly transferring it to secure a Community Center, and to innocent young children to replace their bikes. But we don’t know who they all are!

“In the last 24 hours we got donations from all over, on various platforms — and many are anonymous. It’s a level of giving that deeply inspires me. No attention will be showered. No direct thank yous. No loud expressions of gratitude. I’m humbled by the deep humility of these individuals!

“One’s true identity is what we do behind closed doors, sans fanfare. Kudos to those quietly giving, servicing, uplifting, supporting. My faith is stronger knowing that there are so many good people out there. Thank you so much for bringing out the beauty in faceless acts! And thank you for all the support from the community – both anonymously and publicly! L’chaim”