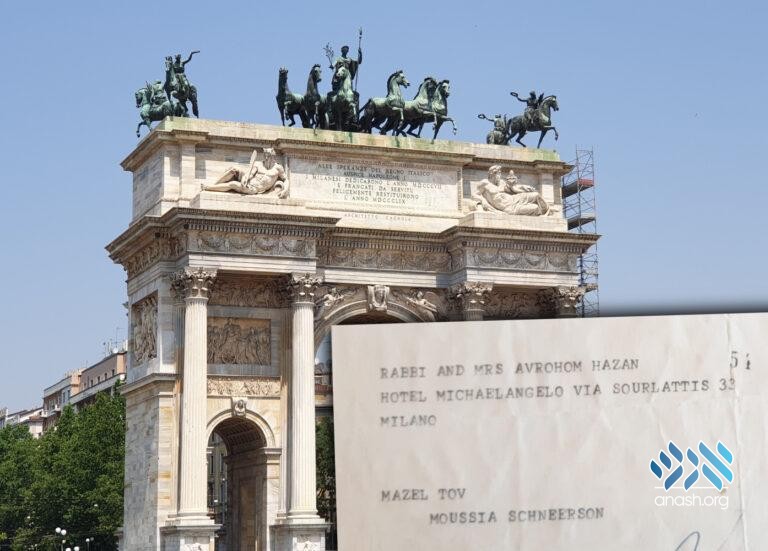 After Mrs. Rivkah Leah Hazan’s marriage, she dreamt of being sent on shlichus to a faraway country. But the Rebbe’s sent them to the last place they wanted – right at home.

Since 1979, Mrs. Rivkah Leah Hazan has served, alongside her husband Rabbi Avrohom Hazan, as a Chabad emissary in Milan, Italy, where she is the principal of the Merkos L’inyonei Chinuch School. She was interviewed in January of 2021.

I come from a long line of Chabad emissaries. My mother’s parents, Rabbi Sholom and Rebbetzin Chaya Posner, served in Pittsburgh and my father’s parents, Rabbi Chaim Meir and Rebbetzin Rivkah Leah Garelik, in Crimea. In turn, my parents — Rabbi Gershon Mendel and Rebbetzin Bassie Garelik — have been serving in Milan since before I was born so, in our home, service was a natural state of being. Although physically we were far from the Rebbe and rarely saw him, we lived with the awareness of the Rebbe’s care and guidance day and night.

I was fortunate that, as a teenager, I was sent to New York to attend Bais Rivkah, the Chabad seminary for girls. During those years, I saw the Rebbe constantly as he was coming and going from prayers or to his office, and I had a number of private audiences with him.

When I graduated in 1976, I was invited to stay on — to work at the Chabad seminaries, Bais Rivkah and Machon Chana. But when I asked the Rebbe, he said that I should go back to Milan to teach at the school there. This was not what I had expected because I had been very happy in New York, but, of course, I went.

During Passover week, a wonderful young man who was raised in Italy, Avrohom Hazan, came back to Milan after spending many years studying in Chabad yeshivot abroad. The year before he had organized an amazing summer for boys who had never had the opportunity to study Torah and it had been highly successful; now he was back to do it again.

His name was put forth as a possible marriage match for me, so when my parents asked me, I replied: “I don’t understand the question — write the name to the Rebbe, and if the Rebbe says I should go out with him, I will.”

My parents submitted the question via the Rebbe’s secretariat, and the answer came back: “It says clearly in the Torah about the first girl named Rivkah: ‘Call the girl and ask her directly.”

At that point, my parents said to me, “The Rebbe is clear — you have to decide.”

But I would not budge. “I never went out with anyone before. How am I supposed to know if he is the right one?” And so I wrote to the Rebbe myself, repeating my refrain that I’ll go out with the young man if the Rebbe tells me to. Whomever the Rebbe chooses, I will meet.

The Rebbe answered me: “When you let me know your opinion, then I will let you know my opinion.”

I was at loss. After consulting at length with my parents and my brother, I submitted two names to the Rebbe — the name of a young man from a very known family and Avrohom Hazan’s. The Rebbe responded by circling Avrohom’s name and writing “look into him.”

We went out the evening I got the Rebbe’s answer and, within a week, we were engaged. The Rebbe sent two letters of congratulations upon our engagement — one to my parents and one to us. The wedding was scheduled for seven months later because I wanted to get married in New York on the Rebbe’s and Rebbetzin’s 50th wedding anniversary, which was to be observed on the fourteenth day of the Hebrew month of Kislev, 1978. But when I informed the Rebbe, he set me straight — he agreed to the date but the wedding was to be in Milan.

Later I saw the impact we had by following’s the Rebbe directive — our wedding made headlines in Italy! The local reporters had never seen a chasidic wedding, one that was taking place outside, in the winter no less. They were also amazed at the Russian dances and described the whole affair in detail. Who knows how many alienated Jews were reminded of their heritage and how many hearts were stirred?

One of the wedding presents my father gave us was two airplane tickets to New York, so that at least one of the sheva brachot, the blessings that are recited in the seven days after the wedding, could be recited at a farbrengen in the presence of the Rebbe. Of course, as soon as we arrived in New York, we told the Rebbe that we wanted to be sent out as his emissaries anywhere in the world.

I was dreaming we would be sent to a faraway place like Japan, or at least to Greece, which also fell under my father’s purview. The last place I wanted to serve was back home in Milan, but that’s where the Rebbe decided to send us.

We were informed by Rabbi Mordechai Hodakov, the Rebbe’s secretary, that from our base in Milan, Avrohom would be traveling to various cities throughout Italy, where small groups of Jews lived and where religious services were needed.

So I asked if perhaps we could settle in one of those cities, but the answer was no — we were needed in Milan where I was to teach. I tried another tack. I mentioned that, due to unrest in Iran, hundreds of Persian Jews had fled and established a community in the suburbs of Milan. Could we live in the suburbs?

The answer again was no — we were to live in the center of the city and, what is more, since we would be working under my parents, the senior emissaries, I was specifically reminded to honor my parents above everything.

I tried to fulfill my assignment joyfully. I tried very hard, although I didn’t always succeed. I recall that, just before Passover in 1991, I hit a particularly rough patch. I felt limited in Milan, even though I knew that — since I was born in Milan, knew the local mentality, and spoke fluent Italian — this was the place for me to be. But I still failed to see what the Rebbe saw.

I wrote to the Rebbe about my unhappiness — pouring out my heart — and I asked for a special blessing.

A few days later a letter came from the Rebbe addressed to “Rabbi Avrohom” (as, unbeknown to me, my husband had also written to the Rebbe) and to “the whole family.” My husband and I decided that we should read it as a family. So, we picked the children up from school, put on our best Shabbat clothes, set out a festive meal, and read the letter out loud.

In this letter the Rebbe acknowledged that he received “our letters” and showered us with blessings. He said that Passover is the holiday of our freedom, and its message must be carried on throughout the year — this meant we would have freedom from all worries, both physical and emotional. And we should be happy day and night.

It was an incredible letter and it changed my life. From that point on my motto became: “Milan is the best place for me to be, and I must be joyful.” The letter hangs framed in our home and any time I begin to feel the tiniest doubt, all I need to do is look at that letter and my doubt totally dissipates. I feel that the Rebbe is here with me — every single moment — day and night.