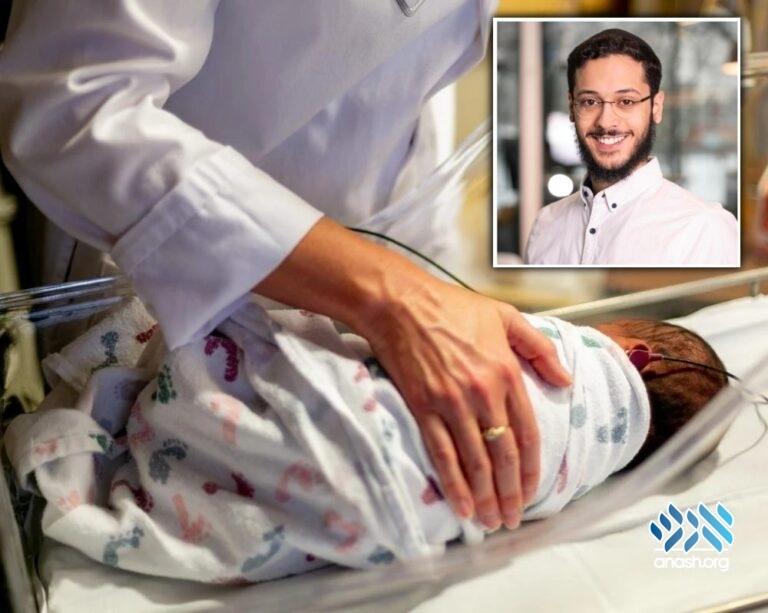 Just minuted after a young Chabad couple was blessed with a baby daughter, doctors flooded into the room, and the baby’s life was hanging by a thread. Then the father got an idea…

Yesterday, on Shabbos afternoon, a young man in our community got up to speak at the farbrengen he sponsored to mark the birth of his daughter.

His name is Avraham Elkabets.

A short while ago, he and his wife were bentched with a baby girl.

A short moment after his daughter was born, the machines monitoring her heart rate began making a lot of noise.

Something was majorly not right!

Within a minute, doctors flooded into the small room from all over the hospital.

May we never need to hear this term again, but a “Code Pink” is what it’s known as when there is r”l a pediatric case of cardiac arrest.

His baby wasn’t responding. Nor was she breathing.

Doctors immediately transferred her over to another room to deal w such situations.

She went from pink to white, and then started turning blue.

The doctors he spoke with told him they don’t know if she will be alright. He’d have to wait.

At the same time, his mind was infused w all sorts of thoughts.

Being a chossid of the Rebbe, he immediately would focus his attention on a sicha he learned from the Rebbe, all about trusting in Hashem, and how to ensure a positive outcome simply by thinking good. Tracht Gut Vet Zain Gut!

After no report from any doctor, R’ Avraham saw a moment when he was able to go into the room with his daughter.

He decided to say the 12 pesukim with the newborn baby.

Placing his hand on his baby’s foot — Avraham began saying the 12 pesukim.

Now up until this point, her lungs, filled with stool – prevented her from breathing.

When he began saying the 12th pasuk “Yismach Yisroel”, one of the doctors told him: “I don’t know what you’re doing, but whatever it is, keep doing it. It’s working!”

For the first time since she was born, his baby began showing signs of trying to breathe by herself.

He said the 12 pesukim again and again.

Before you know it, the first signs of crying emerged. It wasn’t a full cry – but what a moment! What a nes!

48 hours after her birth, they were released to go home. Boruch Hashem, the doctors report that there were no signs of neurological damage. Remember, the baby did not receive oxygen for over a minute.

The Rebbe gifted us with the knowledge of the most powerful weapon the Jewish children possess: the 12 psukim.

By hashgacha protis, my Rabbi – Rabbi Shmuel Zirkind and his wife released an album with children singing only of the 12 psukim, and powerful one-liners in the lyrics which encapsulate the true meaning and message of each posuk.