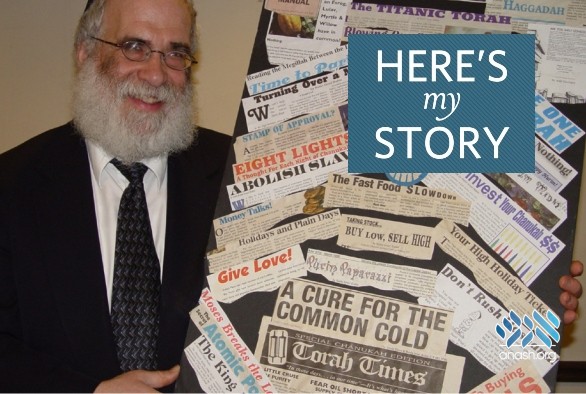 When Rabbi Yisroel Rubin was learning director in Camp Gan Israel Montreal, he started a humorous publication to encourage the children to study Chitas. Much to his surprise, his paper received the Rebbe’s blessings and encouragement.

Since 1974, Rabbi Yisroel Rubin has served as a Chabad emissary in Albany, New York. He was interviewed in November of 2018.

I remember standing at the Rebbe’s farbrengen, a fifteen-year-old on a visit to New York. During that winter night of 1965, I found myself holding onto the chain-link fence overlooking the back of the main synagogue at 770 Eastern Parkway, straining to hear, hanging on to every word.

The Rebbe was presenting a teaching on the conclusion of the Talmudic Tractate of Makkot, and he was discussing the story of Rabbi Akiva laughing at the sight of the Holy Temple in ruins.

As the Rebbe portrayed the episode, Rabbi Akiva’s personal background set him apart from his fellow sages. Whereas his colleagues were elite members of the Jewish establishment, Rabbi Akiva was a baal teshuvah who had struggled to come closer to Judaism later on in life. “Rabbi Akiva said: I am the proof!” the Rebbe explained, paraphrasing the sage. “My character now is the result of all the hardships I have suffered. I exemplify how utter ruin can lead to ultimate redemption!”

The Rebbe’s voice was filled with emotion, and as he spoke, I couldn’t believe my ears. I had never before heard Torah presented with such a multidimensional perspective. With a deep understanding of the biographies of the people in these stories, the Rebbe analyzed who they were as individuals, their interpersonal dynamics, and how this related to their teachings. This unique method of Talmudic study led the Rebbe to ask questions that no one else asked, and to give answers that no one else answered.

For me, it was a game-changer. Bringing the whole Torah to life — making it vivid, colorful, and relevant — became the focal point of my studies, and of so much else in the years since I heard that talk: how I taught; the books I went on to write — like the Albany Haggadah, which is inspired by the five sages from the famous Pesach Seder in Bnei Brak recounted in the Haggadah — and even a project I started in a summer camp just a few years later.

After I was hired to oversee the Torah studies at the Gan Israel boy’s overnight camp in Montreal, I sought ways to make the campers enjoy the time they spent learning Torah. Every day, I published a one-page “newspaper” describing the events and personalities of the day’s Torah reading. I wrote it up journalistically, as though it was “breaking news” happening today, and I used the New York Times typeface for the masthead.

This idea was based on the message that the Rebbe hammered into us hundreds of times: The Torah’s purpose is not to record ancient history, but to provide directives for our lives, to be applied in the here and now. We took this message to heart and tried to demonstrate in a real way that the Torah is not just for old time’s sake.

We named the publication The Daily Chitas — Chitas being the daily study schedule instituted by the Previous Rebbe. With the help of my friend, Shmuel Greisman, we put together this publication in a humorous way so kids would love reading it. For instance, we featured a banner headline about Moses defeating the Biblical giants Sichon and Og that read “Giants Clobbered!” Of course, the “Giants” are also a baseball team, so the headline sounded very relevant.

Our newspaper was produced on an old-time mimeograph machine with stencils. By summer’s end we had sixty pages, which I stapled together and sent to the Rebbe.

Once we came back to the city, Shmuel and I started to print The Daily Chitas once a week and distribute them to various day schools.

We wrote to the Rebbe about this, and he responded that the publication was written nicely, but it needed a name that more people would understand. So we suggested the name Torah Times, which the Rebbe liked. In fact, the Rebbe contributed six hundred dollars to cover the printing costs for the first six months!

But, when I gave copies to some non-Lubavitch rabbis, they disapproved; they felt it was disrespectful to present the stories of the Torah in a humorous and journalistic format. Once, a teacher at the Yeshiva of Flatbush came back with critical feedback on our Toldot issue. We had joked about King Avimelech being struck with constipation, which is the punishment he was given for abducting Sarah, and the teachers felt it was inappropriate.

That negative feedback made me nervous and I was afraid to show that issue to the Rebbe. Instead, I decided to stop sending the new issues to him for several weeks, and then, after I accumulated a pile of pages, I submitted all of them at once with issue number six missing — I figured it wouldn’t be too noticeable if one page from a whole stack was left out. But I didn’t get away with it; the Rebbe wrote to me, “Number six is missing.”

Clearly, the Rebbe was paying close attention to what we thought was a silly children’s production. Knowing that he read every issue — as did his wife, Rebbetzin Chaya Mushka, as I later heard — encouraged me to continue the project despite the backlash.

A few years later, my wife Rochel and I moved to Albany as Chabad emissaries, and in 1980, we held a dinner celebrating the fifth anniversary of our Chabad house. To our surprise, the Rebbe sent a letter for our dinner. The event was scheduled for a Sunday, right between the Vayetzei and Vayishlach Torah portions, and in the letter — written in English — the Rebbe contrasted the distinct themes of those two portions.

Even though the letter was addressed to all the dinner participants, I feel that he was really describing my personal struggles. I cherish and find meaning in its every phrase, and see the particular relevance of the Rebbe’s message, in all of its details, to our local circumstances.

In Vayetzei, the Rebbe wrote, our Father Jacob goes out, sent away from his father Isaac to a new place, where he must work with people who don’t appreciate him. Esau tries to fight him, Laban tries to undermine him, and each step is a big struggle.

But G-d promises him success, and despite his initial concerns, Jacob “proceeds on his way in the fullest confidence in his life’s purpose to carry on and transmit the traditions of his ancestors…”

By the next week, in Vayishlach, the Rebbe continued, Jacob returns to the Land of Israel with his family, blessed “not only spiritually, but with worldly goods.” He hasn’t forgotten his Torah learning, he is blessed with a family and whatever else he needs. Every Jew who acts as Jacob did, the Rebbe added, is “assured by G-d’s blessings, not only to overcome all adversity, but to come out of it all the stronger and more complete in every aspect.”

I read that letter to our whole community each year. Some people wondered how we could ever achieve success, but I kept on reading it, while the skeptics smiled: Will this truly ever happen?

But, with time, we lived through Vayetzei and Vayishlach: We watched as the struggles, the disagreements, the challenges of raising a family away from the bastions of observant Jews, and the successes unfolded, and continue to unfold, in our lives. That prophetic letter continues to lift me up with its message of encouragement. And, as people have come to see that Chabad is a fundamental assurance of a Jewish future in our area, it has become more established throughout the region. As the Rebbe wrote in his letter to us, “The spirit of our Father Jacob is very much alive in the Chabad-Lubavitch institutions… they surely deserve not only the fullest support, but also personal involvement.”

Torah Times can be purchased here.