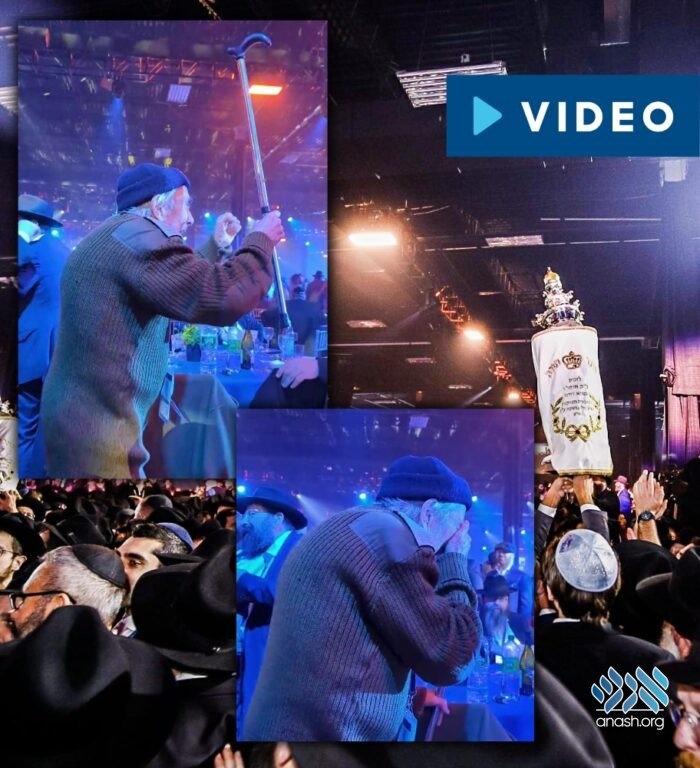 A ten-second clip of an 88-Year-Old Frenchman danced with tears at the Kinus Banquet went viral on social media; Here’s the story behind it.

It was a moment that pulled on the heartstrings of Jews around the world: A frail octogenarian waving his cane in joy followed by a sudden burst of tears.

The scene unfolded as Rabbi Moshe Kotlarsky, vice chairman of Merkos L’Inyonei Chinuch, welcomed the emissaries to the Land of Israel during the roll call at the International Conference of Chabad-Lubavitch Emissaries (Kinus Hashluchim) and the orchestra began to play a lively Chassidic song to the words of Isaiah’s prophecy: “Take counsel and it will be foiled; speak a word and it will not succeed, for G‑d is with us,” wishing the Israeli contingent G‑d’s blessings of safety and security.

At that moment, 88-year-old Chlomo Soria, who was sitting with the delegation from France, leapt up from his chair and began dancing and waving his cane in the air, crying tears of joy.

Soria is a French citizen and veteran of the Israel Defense Forces, his rabbi, Rabbi Mordehai Ben Nephtali of Chabad-Lubavitch of Bondy, France, tells Chabad.org: “Every year, for 10 years, he would go to Israel and volunteer. He didn’t speak a word of Hebrew.”

Eight years ago, Soria’s son-in-law called Ben Nephtali and told him he wanted to join him with his father-in-law on an upcoming trip to New York. He explained that Soria had been diagnosed with terminal cancer and the doctors gave him two months to live. “I felt it was a huge responsibility, but we did it,” recalls the rabbi. They went to the Ohel—the resting place of the Rebbe—and prayed. “He cried there,” says Ben Nephtali.

When they went back to France, the elderly Soria went to his doctors for a follow-up only to discover that the cancer was gone. Soria has since joined Ben Nephtali on three more trips to New York (this being his fourth trip) to attend the conference.

As Soria started to dance, the Chabad representative to the Caribbean nation of S. Lucia, Rabbi Avraham Super, began filming the 88-year-old. In the video, Soria can be seen dancing and waving his cane spiritedly, tears of unadulterated joy streaming down his face. Having witnessed so much in his lifetime, Soria was visibly moved by the explosion of Jewish pride all around him. Since it was posted, the video has garnered tens of thousands of views on social media.

“He always wants to come to New York to thank the Rebbe,” says Ben Nephtali, speaking from the Ohel, before he and Chlomo Soria fly back to France.