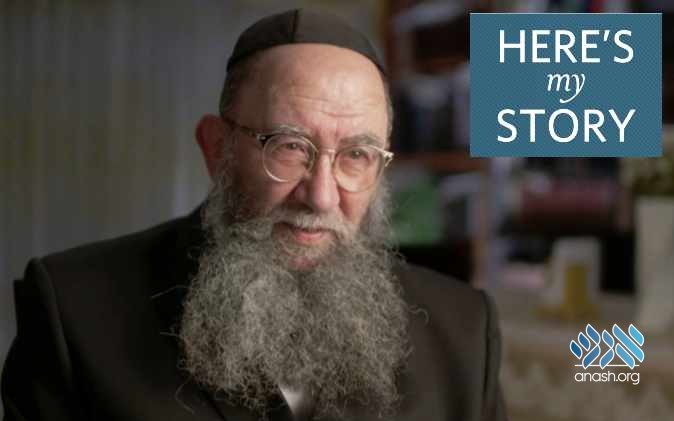 During a Yechidus shortly before moving on Shlichus, the Rebbe told Rabbi Yisroel Tzvi Glitsenstein “When you arrive in Eilat, you will find someone there who will help you.” It didn’t take 10 minutes before help arrived.

Rabbi Yisroel Tzvi Glitsenstein founded the Chabad House in Eilat and directed its programs for close to twenty years. He was interviewed in June of 2020.

When I visited New York in 1975, I made it a habit to pray in the synagogue at 770, the Chabad Headquarters. One day during the evening prayers, the Rebbe looked over the crowd during Kaddish and his gaze fell on me. I immediately lowered my eyes, but a few moments later when I looked up, the Rebbe was still looking at me. And, until the end of Kaddish, the Rebbe didn’t take his eyes off of me for a moment.

This obviously got me thinking why the Rebbe was looking at me like that, and the very next day my question was answered when I was summoned to the Rebbe’s office.

Rabbi Mordechai Hodakov, the Rebbe’s secretary, told me that the Rebbe wanted to know whether I had done the three things that he had instructed me to do the year before. I was asked to submit my reply immediately in writing.

I cannot say what these three things were as they involved private matters, but I can say that they were connected to my subsequent assignment to establish a Chabad presence in Eilat, the Israeli resort on the Red Sea.

Later, I had a private audience in which the Rebbe told me, “When you arrive in Eilat, you will find someone there who will help you.” These words were a bit mysterious, but I knew better than to ask questions. I understood that the Rebbe had his ways of arranging everything, and that my job was mainly not to get in the way.

After I arrived in Eilat, I met with the chairman of the religious council in the area, who put me up at his house overnight. The next morning, I got up and I thought, “Now what?” I closed my eyes and recalled the Rebbe’s words, “When you arrive in Eilat, you will find someone there who will help you.” But who was this person? How could I find him? Where should I start looking?

I took a pair of tefillin and went out to the center of town. There, I began to approach passersby offering to help them put on tefillin, and the response was positive. After about ten minutes of this, a man came over to me and asked, “Who are you?”

“I am the Lubavitcher Rebbe’s emissary,” I answered. “And who are you?”

“My name is Menachem Mendel Hofen,” he said. “I am the security officer for the municipality of Eilat. Among other things, I am in charge of making sure all the schools in the city are safe. Come to my office tomorrow and I will take you to meet the mayor and his deputy; also, I will introduce you to the school principals and anyone else you’d like to meet. I am the man who will help you in Eilat.” Those were his exact words — he was the man who the Rebbe told me would come to my aid here.

I was stunned. I had hardly done anything, been on the street only about ten minutes, and my helper arrived. It was as if the key to my mission was being handed to me on a silver platter.

The next morning, he took me to meet the mayor and other important officials. Afterwards, he gave me a tour of the schools and set up meetings with the principals. At the time there were five schools in Eilat with an enrollment of 2,500 students. Two weeks later, I arranged an event at the schools — I brought in yeshivah students from Kfar Chabad and we celebrated Chanukah together with the children at three assemblies, divided by classes, in each school.

After that event, I wrote a detailed report to the Rebbe. A short while later I received his answer by express mail. The envelope contained two identical letters — the first was addressed to me personally and, at the end, after the words “with blessings,” the Rebbe added in his handwriting, “for outreach in an organized way, and for a good marriage match soon.” The second letter was addressed to the Chabad youth organization; it read, “to Tzeirei Agudat Chabad, Eilat branch, may G-d be with you.” And at the end of this second letter the Rebbe added in his handwriting, “for success in all of the above and for good news.” This is how the Rebbe made it known that the Chabad House I founded in Eilat should be recognized as an official branch of Tzeirei Agudat Chabad.

The Rebbe’s blessings for a good marriage match was soon realized, and I got engaged to my future wife close to the Rebbe’s 74th birthday. I planned to travel to New York at that time to get the Rebbe’s blessing before my impending marriage, and when the mayor of Eilat, Mr. Gad Katz, heard about my trip, he told me that the city council decided to give the Rebbe a birthday present. I agreed to deliver the elegant wooden box with a special key to the city that was made for the occasion.

During the farbrengen marking the Rebbe’s birthday, many people approached him with various gifts. I, too, approached the Rebbe and presented the key and the mayor’s letter to him. The Rebbe looked at it and asked, “Is the mayor a kohen?” When I answered that he was of the priestly class, the Rebbe instructed me, “Say l’chaim for him and for you, and may you have much success!”

During a subsequent audience, the Rebbe took out 200 liras (which was the currency of Israel before the shekel) and he gave it to me, specifying that this money was for the mayor. “This is my contribution to the building of Eilat,” the Rebbe said, specifying that the money should be used “for doing good things for the Jews of Eilat,” rather than for security purposes. Then he handed me another 100 liras and said, “This is for you, do good things for Jews in Eilat.”

A few months after my wedding, I saw the Rebbe again with my bride. The day before, my father had an audience in which the Rebbe spoke about me. “Why is Yisroel Tzvi so downcast? He is accomplishing so much. When you leave here, you should tell him — as a father whose words he is obliged to honor – that he should be happy. And tell him that I told you to say this.”

Subsequently, when I saw the Rebbe, he returned to the same theme, telling me, “The method in which you are operating is incorrect. You take big responsibilities upon yourself, but you have no money to bring them to fruition and no one to help you. Then, when you aren’t able to accomplish what you would like, you feel disheartened and become sad. You must learn from the emissaries in the US. When they go to a city and are the only ones there, they only try to do what one person can do. They also don’t have money, but they do as much as they can with the money they have. Be like them and always be joyful.” Saying this, the Rebbe gave me a big smile.

The Rebbe always emphasized the importance of doing things with joy — especially when representing Chabad as an emissary — for through joy one can achieve the greatest things.