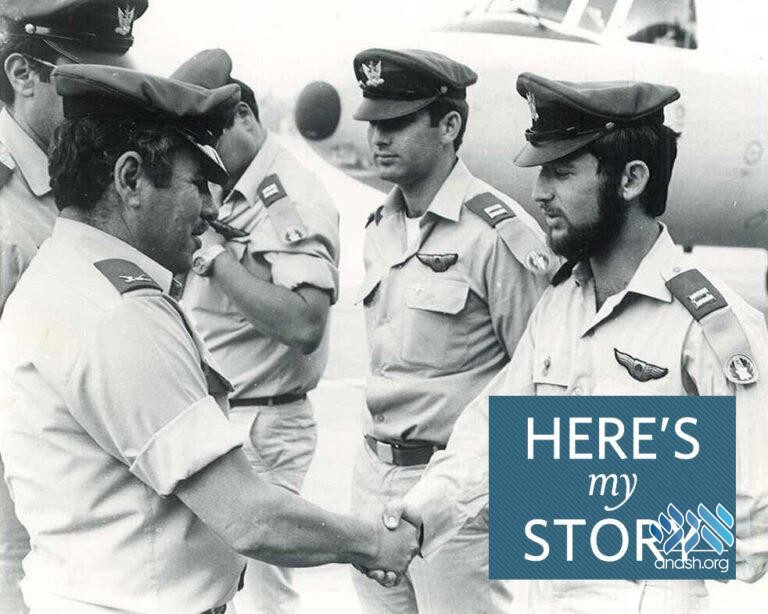 In 1977, Mr. Herzl Makov was one of eleven Israeli Air Force members training in USA. The Rebbe invited them to 770 for a unforgettable meeting and a memorable farbrengen.

During my enlistment in the Israeli Air Force, I served as a forward air controller, a highly-specialized job which involves guiding aircraft and providing aerial defense in the event of attack by enemy planes. During my six years of service, I participated in a number of important missions, including the bombing of the Iraqi nuclear reactor in 1981.

Four years prior to that event, the Israeli Air Force decided to improve Israel’s aerial defense abilities by acquiring four E-2 Hawkeyes — the all-weather, early-warning planes equipped with sophisticated radars — manufactured by Northrop Grumman. And in order to prepare for the new squadron, eleven airmen were sent for a year of training in the US. I was selected to be part of this group.

While training, we lived on Long Island, where the Northrop Grumman factory is located. Long Island borders the Brooklyn borough of New York City, and for Chanukah of 1977, we were invited to visit the Lubavitcher Rebbe in Crown Heights, to participate in a farbrengen in honor of the holiday.

None of us was religious, but I come from a traditional home so I was definitely happy about this opportunity. The names Lubavitcher Rebbe and Chabad weren’t foreign to the rest of my colleagues either. Chabad’s Mitzvah Tanks would come onto our base from time to time, and everyone was familiar with the outreach work of Chabad, which constantly strives to bring Jews closer to Torah.

When we arrived at Chabad Headquarters, before we even entered the big hall where the farbrengen was to take place, we were led to the Rebbe’s office. He greeted us from behind his desk and, from the first moment, we felt that we were in the presence of a great and special man, an important leader of the Jewish nation. There was a kind of electricity in the air, although I can’t define exactly what caused the experience to feel so utterly unique.

We were five officers — I was the youngest and had just advanced to the rank of lieutenant, while the highest-ranking among us was a lieutenant colonel. The Rebbe’s secretaries were also in the room with us, and we stood around the Rebbe’s desk. The whole conversation took place in Hebrew, although the Rebbe spoke with a strong Yiddish accent.

To begin with, the Rebbe asked what we were doing in the United States. When we told him that we came for training, the Rebbe wanted to hear all about the new plane. “What are its main features?” he asked.

Our answer was relatively short, as we didn’t want to get into technical details, but it was clear from the Rebbe’s follow-up questions that he was proficient in aeronautics. For example, when we explained that the Hawkeye is a command-and-control aircraft, the Rebbe asked how high it flies. When we answered that it can fly at 30,000 feet, the Rebbe asked about its color. Low-flying military planes are painted in camouflage, so enemy planes that are flying above will have a hard time identifying them against the colors of the ground below. But the Hawkeye was painted in blue-gray hues — an “aerial superiority scheme” — so that it can be hidden against the colors of the sky.

Then the Rebbe went on to speak to us about other timely matters, and he expressed his firm opinion that no part of the Land of Israel can be given away. At that time the peace talks were already beginning between Israel and Egypt, in advance of the Camp David summit which would take place in September of 1978. The Rebbe explained that the Land of Israel was given to the Jewish people by G-d for safekeeping, and therefore, “it isn’t ours to give it away” — those were his words. Although we were soldiers on active duty and not involved in politics or foreign policy, the Rebbe saw fit to discuss with us his views on this subject.

At the end of the encounter, the Rebbe gave each of us two one-dollar bills, which he instructed us to donate to charity, and he blessed us to continue to serve the Jewish people safely and effectively.

Right after the meeting with the Rebbe, we went downstairs to the big hall, which was packed with people. We were squeezed so tight by the crowd that we had to turn our heads sideways to see the Rebbe, who sitting upon a raised platform.

I remember the great excitement that swept the room when the Rebbe came in. As the singing began, which the Rebbe encouraged with his hand, a very strong spirit of camaraderie filled the air, and it seemed to me that, at any moment, the hall might take off into the air like a plane. When the Rebbe spoke, I could not understand much because he used Yiddish, but it was also clear to me that the Rebbe saw every single person in the audience. When he scanned the crowd with his eyes, it seemed that he was looking right at each one of us, at every soul who was present.

At the conclusion, we were left with a lasting impression that the Rebbe was a person who was deeply concerned about the Jewish people wherever they may dwell. For me, personally, this was a very important encounter with a giant of the Jewish nation, and | left feeling both inspired and uplifted.