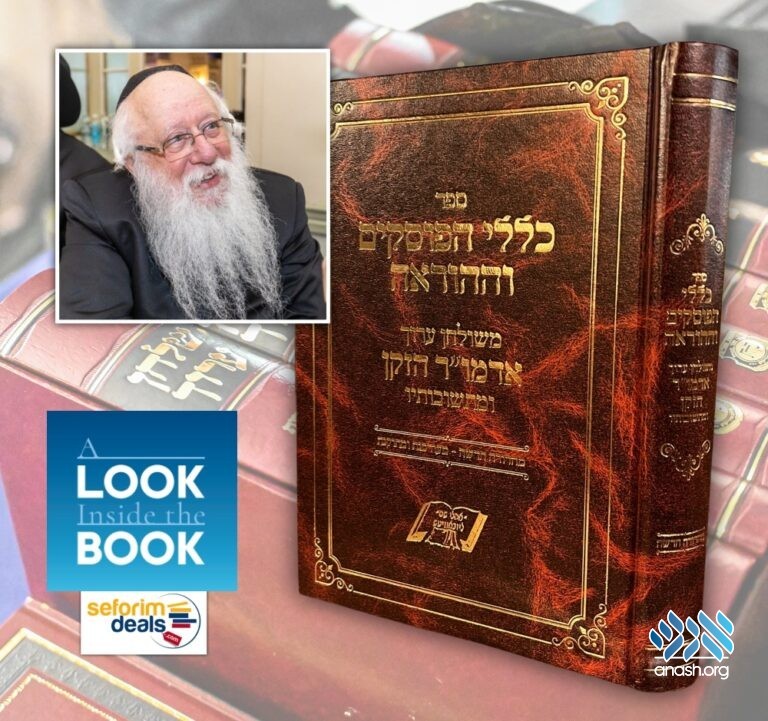 A Look Inside the Book: There are many seforim that teach us what the Alter Rebbe paskens, but there is one sefer that takes us “behind the scenes”, showing the process and methods the Alter Rebbe used in Halacha, and it’s all taken from his very own words.

Harav Yekusiel Farkash has pioneered somewhat of a revolution in the study and application of the Alter Rebbe’s Shulchan Aruch, expressed in his acclaimed seforim on hilchos Shabbos and Taharah, where very careful attention is paid to the Alter Rebbe.

As is well known, the Rebbe encouraged the diyuk in the Alter Rebbe’s Shulchan Aruch, showing how every word is precise. Oftentimes, while discussing a particular halachah, the Alter Rebbe will set down a principle that is relevant for other areas of halachah as well.

Klalei Haposkim Vehahoraah is the byproduct of R. Farkash’s many decades of incredibly thorough and perceptive study of the Alter Rebbe’s Shulchan Aruch. In this unique work, the author sets out to collect all of the material scattered throughout the Alter Rebbe’s halachic writings that is relevant to klalim, general principles of halachah.

In this review we will survey the format and content of the sefer, highlight its practical utility, and discuss how it can best be used.

The body of Klalei Haposkim Vehahoraah contains only verbatim quotes from the Alter Rebbe. These are arranged into 352 numbered klalim, with some entries containing multiple quotes on the same theme.

Klalei Haposkim Vehahoraah was first published in 5751, and appeared in a new and revised edition in 5765. A number of klalim were added in the 5765 edition, but the original numbering was preserved by inserting the new entries with asterisks. The new third edition of this sefer follows the same format with four new klalim added (1*, 16*, 96*, 128*), and some edits and expansion of the existing klalim. The new edition adds approximately 30 pages to the 5765 edition.

The 350+ klalim listed in this sefer can be divided into three major categories.

The first category is klalim of how to decide halachah.

For example, the general rule that when there are conflicting opinions halachah kebasrai, the halachah follows the later authorities who were aware of the arguments of the earlier authorities and considered them before reaching a different conclusion.

In klal 63, R. Farkash collects 10 sources in which the Alter Rebbe applies this rule, and then analyzes them to determine the Alter Rebbe’s opinion on its application. Do we invoke halachah kebasrai only to be machmir, or also to be meikil? Does this rule apply across the generational divide of Rishonim and Achronim, or only within each of these categories?

A second category consists of klalim for how to read halachic sources.

For example, when poskim use the term “yesh lehachmir,” does this indicate an obligation to be machmir, or merely a recommendation to do so (klalim 129-132)? When the term “miyad” is used, does this mean literally instantly, or just shortly thereafter (klal 123)?

Of particular importance are the klalim listed for the methodology of the Alter Rebbe himself (340-352). These klalim also include general principles regarding the Alter Rebbe’s Shulchan Aruch derived from the Tzemach Tzedek and the Rebbe.

For example, klal 340 contains quotes from the Alter Rebbe explaining that he didn’t include a particular halachic detail because its isn’t commonly relevant in his time and place. To the three sources quoted, it would appear relevant to add Kuntres Acharon 254:1, where seemingly the same principle is invoked, (in addition, the reference to Kuntres Acharon 507:5 should be corrected to 507:4).

[Regarding this klal, further analysis could have been provided. A central point of difference between the Alter Rebbe and other post-Shulchan Aruch halachic codes is that the Alter Rebbe includes all of the halachos of the original Shulchan Aruch, and doesn’t omit those that aren’t commonly relevant (as do the Kitzur Shulchan Aruch and Chayei Adam, for example).

In fact, the Alter Rebbe wrote separate works on select halachic topics, such as Seder Birchos Hanehenin and Seder Netilas Yadayim, for the stated purpose of providing only the necessary and common halachos.

Therefore, the definition of which uncommon details the Alter Rebbe omitted in the Shulchan Aruch requires further clarification. Perhaps this klal only pertains to details raised by the nosei keilim (Kuntres Acharon 254:1; 263:4; 507:4), and to opinions that are anyway rejected lehalachah (Kuntres Acharon 350:1).]

The third major category consists of klalim regarding the application of broader halachic principles.

For example, when do we say that lo ra’inu eino rayah, not having observed a certain practice isn’t proof that it isn’t the halachah (90)? When do we apply the rule of safek d’rabanan lekula, and when can minority opinions be relied upon in matters that are d’rabanan (96-113)? What constitutes a minhag, what weight to minhagim carry in the determination of halachah, and when should a minhag be uprooted (165-172)?

One interesting discussion is whether to change the halachic decision reached by later poskim after sources or girsaos from earlier authorities are uncovered. In klalim 45-49, R. Farkash analyzes this often-discussed topic in light of the writings of the Alter Rebbe and the Rebbe on this topic, distinguishing between changes lechumra vs. lekula; d’oraysa vs. d’rabanan; and mahaduros vs. girsaos.

Another interesting discussion builds off the Alter Rebbe’s limitation of the halachah that we may not cause ourselves pain based on Yaakov Avinu’s subjecting himself to suffering in heat and frost while working for Lavan. R. Farkash uses this a springboard for a lengthy analysis of the different opinions about the observance of the mitzvos by the avos prior to matan Torah, and when halachos can be derived from their conduct.

Klalei Haposkim Vehahoraah is not designed as a comprehensive treatment of klalei halimud, but rather as an exploration of the Alter Rebbe’s contribution to this field.

As a result, the most beneficial way to use Klalei Haposkim Vehahoraah is as a companion to in-depth study of the Alter Rebbe’s Shulchan Aruch. Study of the halachos—and particularly the Kuntres Acharon and Mahadura Basra from which most of the klalim are derived—will be greatly enhanced by R. Farkash’s analysis of the general rules that can be derived from them (notably, the new edition of the Alter Rebbe’s Shulchan Aruch references Klalei Haposkim Vehahoraah over 200 times).

Systematic use of the sefer in this way is enabled by the index of sources provided. A detailed alphabetical index of topics is also included.

Rabbonim and poskim will of course derive great benefit from the sefer as reference work, and laypeople will also find many discussions of broader interest within the sefer, some of which have been highlighted above.