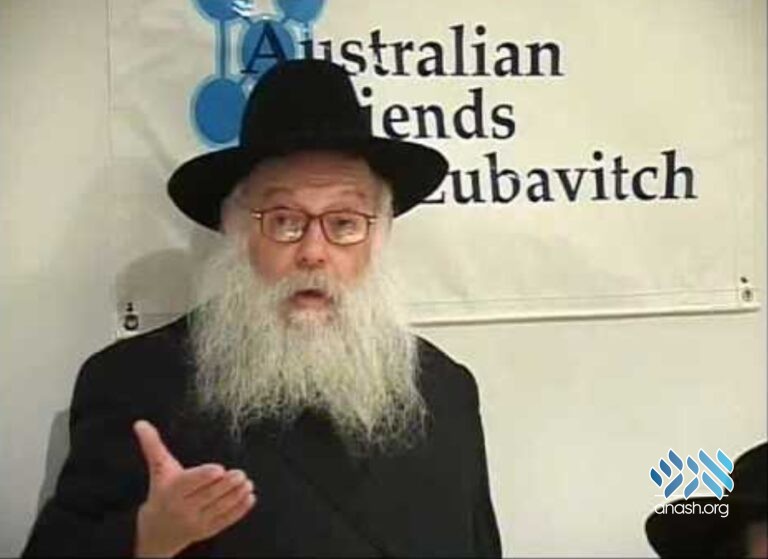 Stories Rabbi Groner Told: A collection of stories when the Rebbe gave advice for medical conditions, including one involving Rebbetzin Chaya Mushka.

One time, a couple and their 4-year-old son came to the Rebbe. The mother told the Rebbe that from the time her son was born, he never spoke a word. They went to a whole host of doctors, but the results were fruitless.

The Rebbe then turned to the parents and said, “What do you mean he doesn’t talk – he just recited the entire first verse of ‘Shema!’”

The mother’s eyes welled up with tears. “Rebbe,” she cried, “this is the first time we ever heard a word from him!”

The Rebbe said, “Take your son home. It will be a gradual process. First, he’ll say some selected words, then complete sentences, then paragraphs, and eventually he’ll speak like an average child.”

A month later, the mother called me up and told me, “It happened just as the Rebbe said it would. It’s a month later, and he’s talking like a normal child!”

A child had difficulty with his feet, and the orthopedic doctor who examined him said that he didn’t think the child would ever be able to stand. So the family came to the Rebbe for a bracha.

[The following can be seen on video.]

The Rebbe took a dollar, put it in the hand of the child, pointed at the child and said, “You will be well!”

The next day, when the parents walked into the child’s room to take him out of his crib, they noticed the child standing and grasping onto the crib rails. The mother laid the boy down in his crib and left the room. A few minutes later, the mother reentered the room and the boy was once again holding onto the railing while standing.

She took him out of the crib and stood him on the floor, to see if he could stand – and he did! Then, while holding his hand, she said, “Take a step!” He took one step, then another, then another, while holding on. The next day, he took steps on his own. A few days later, he began to run.

A month later, they took the boy back to the orthopedic doctor to demonstrate how he could run. The doctor said, “This is not the same boy. You switched him with another.” The parents insisted it was him, and they explained that he was able to walk thanks to a blessing of the Lubavitcher Rebbe.

“Oh, the Rebbe gave a bracha? In that case, I am not at all surprised. I am aware of quite a few individuals who have benefited from the Rebbe’s brachos.”

The Rebbetzin related the following story to Rabbi Groner:

There’s a family in New York that is related to us. My husband, the Rebbe, was mekarev them by allowing them to have yechidus, and in more recent years, when that option was not possible, by seeing them on Sunday for dollars.

Once, I received a phone call that the mother of the family was dangerously ill, and the doctors insisted on performing an operation. My relatives wanted me to ask the Rebbe for his approval. The Rebbe said absolutely not.

When the family informed the doctors that they do not consent to the operation, the doctors replied that they were taking their mother’s life in their own hands. But they remained steadfast.

A while later, they called to inform me that the situation had deteriorated, and they wanted to know how to proceed. I told them, “You know, in Chabad, we don’t ask twice. If the Rebbe said once not to perform the surgery, you’ve got to listen.”

“But what should we do in such a critical situation?” they asked.

I replied, “The Rebbe is not home now, but I’m telling you, chassidim don’t ask twice!”

“That’s true, but you are not a chossid, you are the Rebbe’s wife!”

“I am also a chossid of the Rebbe. And if chassidim don’t ask a second time, I don’t either.”

When the Rebbe came home, I repeated the conversation we had. The Rebbe became very serious, banged on the table, and said, “Ich hub gezugt einmal nisht oparirn, un ich zug a tzveite mal nisht oparirn – I said it once, and I’ll say it again. Don’t operate!”

Never in my life did I see my husband talk that way. The doctors had no clue what to do at that point.

I told my husband that our relatives called again. They were at a loss as to what to do. The Rebbe said, “I don’t get it. I thought that if the doctors see how stubborn they are not to let them operate, surely they would have prescribed some alternative medication. Why don’t they do that?”

When the idea of alternative medicine was proposed to the doctor, the doctor said, “What does the Rebbe know? Surgery is the only thing that can help at this point.” So the family decided to find another doctor who works in a different ward of that hospital.

They found a Jewish doctor and related the entire story. After checking the patient’s records and assessing the situation, he came back and said, “I think I know what type of medication the Rebbe had in mind for your mother. It needs to be taken intravenously. Listen, I have a white jacket and an identification card. I can basically go into any section of the hospital I please, even if it’s not for the benefit of one of my patients. When no one is around, I’ll get that shot and administer it to your mother.”

Two days later, the doctor asked the family, “So tell me, what do the doctors say?”

They replied, “The doctors said that they don’t know what happened, but it seems that the situation has stabilized somewhat, and has not taken a turn for the worse as predicted.”

“Well, I’m not sure this is what the Rebbe had in mind, but I’ll continue with the injections,” said the doctor.

Two weeks later, the mother was no longer in critical condition, and a few weeks after that she returned home, and of course, immediately notified me, [the Rebbetzin].

When my husband, the Rebbe, came home, and I told him what happened, he said, “When I was asked the first time for permission to allow the doctors to operate, I saw that if chas v’shalom they would operate, the woman would not get out of bed alive. When they asked again, I held my ground – under no circumstances may they operate. I thought that for sure they would prescribe medication instead. When I saw that they weren’t doing that, I myself had to suggest it.”

You see, it’s important to follow what we say, even if it flies in the face of the advice of all the “experts.” And, in the final analysis, that’s what saved them, their emuna and bitachon in the Rebbe.