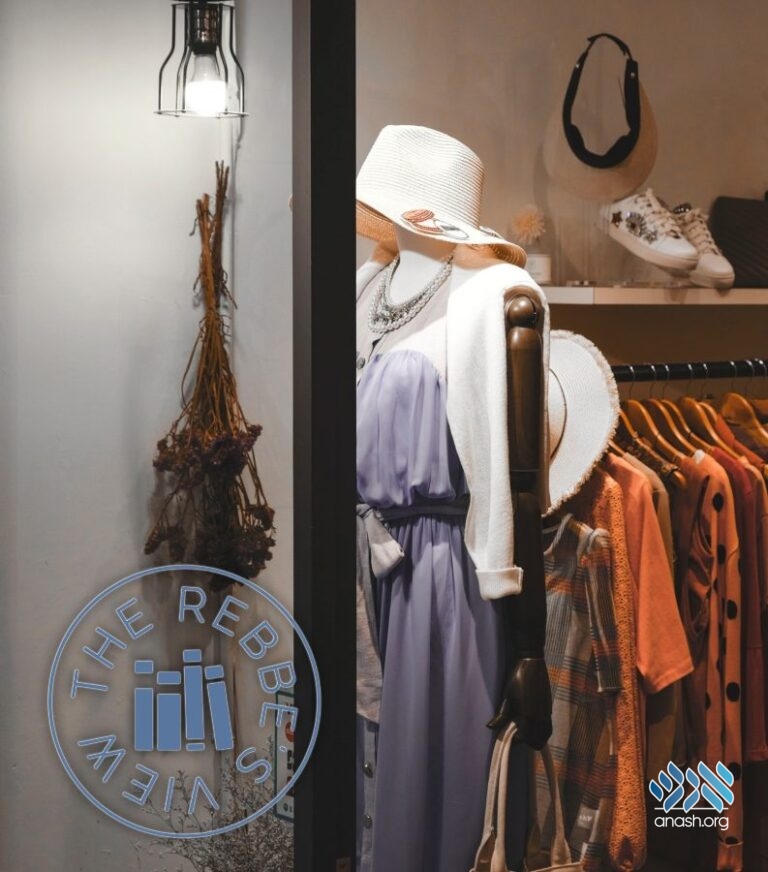 Judging by the passion with which the Rebbe spoke about modesty, which he named a “foundation of Yiddishkeit,” it’s clear that this subject was very high on his list of priorities.

While some could mistakenly think that Lubavitch which emphasizes internal avoda and hafatza doesn’t consider dress and tznius as important, a read of the Rebbe’s talks and letters clears up that misconception. Judging by the passion with which the Rebbe spoke about modesty, which he named a “foundation of Yiddishkeit,” it’s clear that this subject was very high on his list of priorities.

What follows are quotations from the Rebbe on the topic. The quotes have been taken from the book “Bas Melech Pnima – The Rebbe on Modesty,” which is available for purchase here.

Top of the Agenda

In this landmark letter written for the 5730/1970 Chabad Women’s Convention, the Rebbe, in seldomly used terms, underscores the urgency and priority that tznius demands:

“Although from time to time I have spoken about modesty, today’s reality demands that I reiterate this subject as a matter of urgency.

“The ‘Torah of Life,’ which guides every Jew along the path that makes every aspect of his daily life worthy and truly happy, strongly emphasizes the importance of modesty, in some ways even more than other aspects of daily conduct… The Torah, the Gemara and the Zohar are filled with assurances of the reward that is earned by modest dress… From this we can gather that dressing in a modest manner is truly meaningful. Conversely, the stern warnings of the unfortunate consequences when modesty is absent, as explicitly described in the third chapter of Yeshayahu HaNavi, leave no doubt that this is a serious matter…

“Even from a purely mortal perspective, one can observe the detrimental collapse that results from a breakdown in modesty. The proliferation of shameless fashions in women’s clothing today, which are intended to arouse man’s basest animalistic instincts, gives expression to the lowly state of the modern world with regard to fundamental moral values…

“In light of the above, I am of the opinion that the subject of modesty must be set as one of the top priorities of the agenda in responsible Jewish circles… Your urgent duty at the moment should be to launch an intensive campaign to call on the Jewish public, in particular Jewish women’s organizations, regardless of their respective responsibilities, to incorporate the question of modesty among their activities.” (Igros Kodesh, Vol. 8 p. 204)

As is clear from the above letter and many others, the Rebbe wanted that not only Chabad women and girls should dress modestly themselves, but they should also influence other women in the ways of tznius. This is accomplished both through their words and through being living examples (sicha to shluchos, Shabbos Mevorchim Kislev, 5748).

Two girls in a Chabad school once wrote to the Rebbe about tznius problems there. The Rebbe sent a response during Chanukah, 5730 – a letter of a general nature on the subject of Jewish women and their mission, and the Rebbe concluded the letter in his own handwriting: “With blessings for success in mivtza tznius and for good news in this area soon.”

Two months later the girls received another letter in the Rebbe’s name, signed by the secretary, Rabbi Simpson. It said: “In connection with your letter of Motzaei Shabbos, 12 Kislev, about dressing modestly, please provide updates.”

At a yechidus with the Rebbe in Tammuz, 5721 (1961), R. Uriel Zimmer inquired about the Rebbe’s much sought-after opinion on the upcoming elections in Israel, but the Rebbe replied that he didn’t wish to reveal his opinion about it yet.

Throughout the conversation, the Rebbe mentioned several times that action must be taken in the area of tznius. The Rebbe said, “This isn’t just election season, but tznius season!” (Heichal Menachem, Vol. 1, p. 202)

At a yechidus of R. Mordechai Shmuel Ashkenazi and his Rebbetzin Sima in Tishrei, 5729 (1968), the Rebbe asked Mrs. Ashkenazi: “What about the yiras Shamayim of the girls and women in Kfar Chabad?” And without waiting for a response, he said: “The true test of yiras Shamayim is tznius and tahara.”

In a yechidus with R. Mordechai (Mottel) Levin, the educational director of the Beis Rivka Seminary in Kfar Chabad, the Rebbe urged him to impress upon the students the particular importance of modest dress. The Rebbe explained that since in the world at large this virtue is so widely neglected, when a girl dresses in a modest manner, it is evidence of her level of yiras Shamayim.

Don’t Tell Me About Pnimiyus!

In 5716 (1955), since no girls’ high school had yet been established in Kfar Chabad, the girls were attending a frum high school in Ramat Gan. The Rebbe, however, preferred Beis Yaakov of Bnei Brak which had higher standards of tznius.

Some girls and their parents were not fond of this idea, and argued that Beis Yaakov emphasized chitzoniyus, whereas the Lubavitch girls focused on pnimiyus. In a letter to the Rov of Kfar Chabad, Harav Shneur Zalman Garelik, the Rebbe dismisses the argument as ridiculous and insists that they should accept the higher standard of dress.

“Let the truth be stated: The only reasonable explanation for the girls’ tremendous opposition to attending Beis Yaakov is their unwillingness to comply with its dress code and the like. And apparently the mothers have a hand in this, more than the girls themselves.

“[The light of truth] is so clouded that one of the parents writes to me at length that [he does not want to send his daughter to Beis Yaakov because] “we respect pnimiyus, not chitzoniyus.” He evidently wants me to believe that the lack of desire to attend Beis Yaakov is because the girls are so extremely pnimiyusdik that they simply cannot bear any chitzoniyus, and so on…”

In a famous yechidus, after the Rebbe appointed her to head the Beis Chana school in Yerushalayim, Rebbetzin Sima Ralbag asked the Rebbe for guidance concerning the school’s standards of tznius.

The Rebbe instructed her to follow the standards used in the Beis Yaakov schools.

In a letter to a Beis Rivkah dinner, the Rebbe asserted that tznius today must be no different than in previous times.

“Jewish women must know that the same Torah and mitzvos, and the same principle of kol kvudah bas melech pnimah (“the entire glory of a princess is inward”) which applied in der heim apply equally in America.” (Igros Kodesh vol. 26 p. 79)

Before I traveled to see the Rebbe for Tishrei 5730 (1969), my wife asked me to discuss with him a tznius gathering which had taken place in Bnei Brak. The gathering was headed by the R. Yaakov Landau, and my wife was one of the organizers. I had a lot of things to discuss with the Rebbe, so I was unsure if I wanted to mention this, but ultimately, I added a few words about it at the end of the note I handed to the Rebbe.

I was quite surprised when the Rebbe replied briefly concerning all the other issues, but spoke about this subject at length. A whole sicha, really. I saw how much the Rebbe was affected by it.

The Rebbe was agitated, and there was frustration in his voice: “Now the style has become to wear clothing that reaches the ground. That’s the brainstorm of some crazy goy in Paris! Should Jewish women be taking cues from some goy in Paris?! Is that how it ought to be?!”

I was taken aback. The Rebbe was speaking with such forcefulness. The Rebbe continued:

“Immoral people today have contrived to make tight clothing the fashion. It accentuates the body and arouses men’s desires. Long and tight clothes are the brainchild of these people.

“The knees must be covered while a woman is seated, and this isn’t always the case. Her clothes must therefore extend at least 10 centimeters beneath the knees to ensure they remain covered. I’m not deciding the length, that’s the job of Rabbonim. I’m simply stating the minimum. And may blessings rest upon whoever adds to it.

“This isn’t to say that women shouldn’t dress well – but the clothing must be appropriate, even though the designers try to make it inappropriate. The proper approach is to create tasteful, respectable clothing, neither too long nor too tight.”

He also said that since my wife had brought up this issue, this showed that her words “came from the heart,” and that she should therefore talk about it with other women – not necessarily via large gatherings, but to discuss it, and also see to it that other women discussed it amongst themselves, which would be most effective.

The Rebbe concluded that this was a critical issue, since modesty is the wall protecting klal Yisroel, and added that more must be done, and the more the better.

Forget About “The Goy in Paris”

R. Shmuel Chefer, head of the Beis Rivka Seminary in Kfar Chabad, once shared some sharp words that he had heard at yechidus.

“The Rebbe raised the subject of short dresses and skirts that were fashionable at the time and expressed himself in strong terms. He asked me to assemble the students and their mothers and to address this subject, but I was not to tell them that I was speaking on behalf of the Rebbe. The reason: If they knew that, and nevertheless (chalila!) disobeyed, ‘I would have to distance them from my presence.’

“Finally, the Rebbe said that he had been told that ‘the goy in Paris’ was about to launch the opposite style – long dresses and skirts – and he added: ‘Och un vei (“What a pitiful situation it would be!”) if the girls would now change their style of dress to match the new fashion only because ‘the goy in Paris’ so decided, and not because of what is written in the Shulchan Aruch…”

The topic of modest dress was so important to the Rebbe that he asked women to try and influence the fashion designers to design their clothing in a modest fashion. Here is what the Rebbe wrote on a note to Nshei Chabad:

“It is obvious that anything done to promote modesty is extremely important, and by all means possible. This includes speaking (discreetly with the fashion designers and) with the women’s clothing stores, especially since some women complain that it’s hard to find modest clothing in the stores.

“It is important to stress, in an appropriate way, that a woman or girl whose conduct announces that she has no quality that makes her attractive and admired other than being immodest is putting herself to shame.”

The Brachos That Result

An ever-present message in the Rebbe’s discussion of modesty is the incredible brachos that are bestowed on the women and girls who conduct themselves modestly.

It is noteworthy that the Rebbe emphasizes these rewards time and again, more than when addressing other essential mitzvos. Among the brachos promised are health, parnassa, nachas from children, a shidduch, the protection of Jews in Eretz Yisroel, and the ultimate Geula.

At a Yud Tes Kislev farbrengen, the Rebbe laid down this promise:

“The Torah promises that if ‘the entire grace of a princess is inward,’ one will have children that will give them true nachas, not just Olam Haba nachas, but also nachas in this world… When we spoke about this matter years ago one could have thought that this was merely a fantasy. Taamu ure’u! Try it, and you will see it for yourself! (Sichos Kodesh 5728 vol. 1 p. 229)

For a complete collection of the Rebbe’s words on tznius and modesty, see Bas Melech Pnima – The Rebbe on Modesty. A small number of copies are available for purchase here.