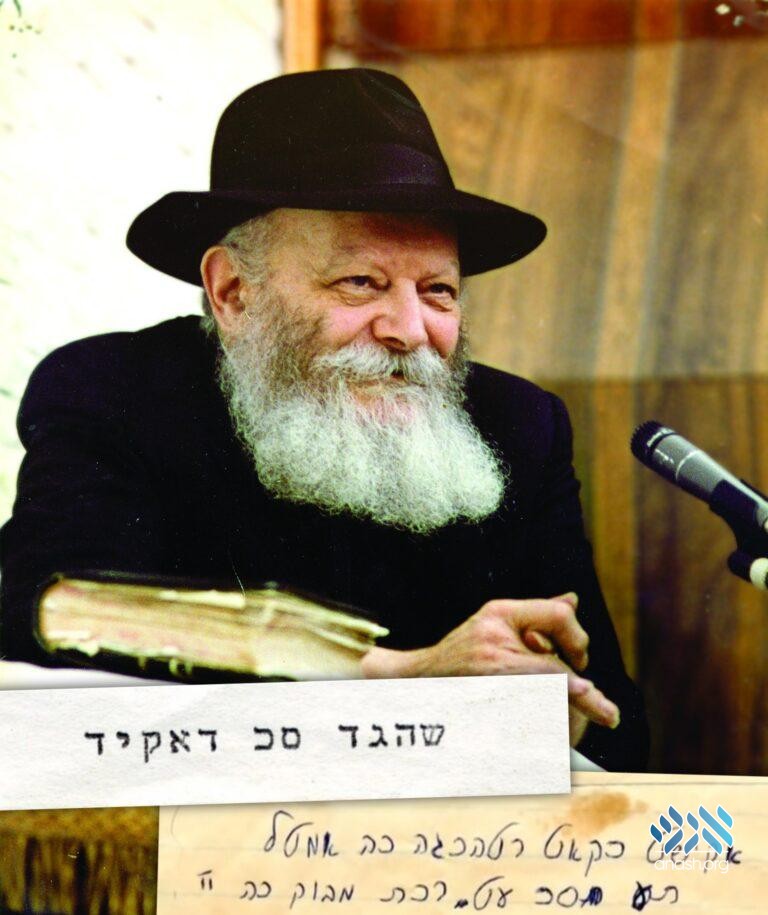 Just days before her Bas Mitzvah, Mrs. Shulamis Saxon wrote a letter to the Rebbe asking for a blessing. At the end of her letter, she added a coded message.

For the past two years, Mrs. Shulammis Saxon has been living in Israel, where she teaches at the Oryah Seminary in Jerusalem and also gives online classes for women. She was interviewed in the My Encounter Studio in August of 2013.

When I was approaching my Bat Mitzvah, I heard that there was a custom to write to the Rebbe for a blessing for the occasion. I was fairly new to Chabad and wasn’t familiar with this custom, but as I sat down to write my letter, I thought it would probably be nice to also give the Rebbe a blessing. I shouldn’t just be asking and taking; I should also be giving. This is the way my twelve-year-old mind reasoned.

I knew that the Rebbe was childless, so I decided to give him a blessing for children. Now, this was 1981, so the Rebbe was nearing eighty, but I did not see that as an obstacle. Didn’t Avraham have Yitzchak when he was one hundred years old? The Torah teaches us that G-d can do anything!

Still, I was a little bit shy about writing this outright. I didn’t know if the Rebbe opened the letters himself, or if his secretaries read them first. I didn’t want anyone else to see what I wrote, because they might not give my letter to him if they felt that a blessing to the Rebbe from a little girl was not appropriate. So I decided to write that part of the letter in Hebrew code.

There are a number of substitution systems where Hebrew letters are exchanged with each other according to certain specific methods. The most famous is called Atbash, but there are many others. My younger brother helped me with this, and he told me which code was best for me to use.

I wrote the following in normal Hebrew:

I concluded by writing in big letters across the page: “I want Mashiach now!”

And after that, I wrote the following message in code: “Birchati leRabbi sheyivaled lo banim af al pi shelo nigzar lo kach — This is my blessing to the Rebbe: that heshould have children even if it has not been decreed thus for him.”

A while later, I received a letter from the Rebbe addressed to me, dated on the day of my Bat Mitzvah. He wrote in Hebrew:

In answer to your letter, in which you write that you have reached the age of twelve, which is the time of Bat Mitzvah. May it be G-d’s will that you accept upon yourself the yoke of heaven and the yoke of the mitzvot with a full heart. May G -d bless you to be successful in your studies and in your activities. You should grow to be worthy of being called a daughter of Chabad, in keeping with the will of our holy Rebbes.

You should also influence your friends through your words, and even more so through your example as a daughter of Israel who is educated in chasidic teachings. And may this bring you spiritual and physical satisfaction.

The Rebbe’s signature followed this. And then, all the way at the bottom of the page, there was a phrase that I could not make out. It seemed like gibberish. I thought that it must be some sort of internal reference like you see on business letters. I showed it to my brother who clued me in. “That’s the Rebbe’s answer to your blessing, in the same code that you used. It says, ‘Todah al habrachah — thank you for the blessing.’”

Being twelve years old, I thought this was really neat, and I framed the letter. But I didn’t realize the true significance of what transpired until I was older.

Here was this holy man who spent his days in prayer and Torah study, and of course with everything involved in leading Chabad. He then spent his nights meeting with people and, in between, answering untold number of letters personally. My Bat Mitzvah fell on his mother’s yahrzeit — during the busiest time of the High Holidays, between Rosh Hashanah and Yom Kippur — yet on that very day, he answered my letter, which I find absolutely mind-boggling!

I was just a little girl, not from any important family. Nevertheless, the Rebbe read my letter carefully, taking the time to decipher the message in code, and then going to the trouble of responding in the same code.

When the significance of all this dawned on me years later, I realized how much I mattered to the Rebbe even though he did not know me or my family personally. I mattered simply because I was a Jew.