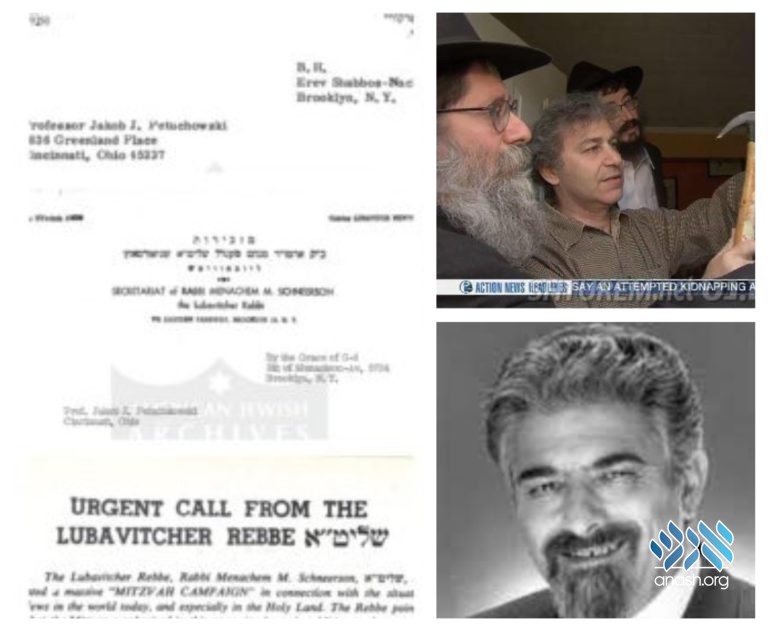 An exchange of letters between the Rebbe and Prof. Jakob J. Petuchowski, a Reform Rabbi and later professor at the Hebrew Union College in Cincinnati, was recently uncovered.

Professor Petuchowski was raised frum in Germany and it seems even attended frum yeshivos as a teen, but while he claimed to continue to keep mitzvos, he unfortunately somehow ended working for the Reform movement in the US and Eretz Yisroel. In Cincinnati, he came in contact with Chabad and thus began corresponding with the Rebbe.

In one of his first letters to the Rebbe from 20 Sivan 5734/1974 (to which the Rebbe’s letter below is a response to), he demanded that the Rebbe tell him immediately that he doesn’t believe that the school children in Maalot were killed because they lacked kosher mezuzos, since he had heard this being said in the Rebbe’s name. He also expressed disappointment for not receiving a reply as fast as he would have expected.

The Rebbe’s mazkirus replied that the Rebbe had in fact responded earlier and the letter must have been lost and they attached a copy of the original letter. In the Rebbe’s response (printed below), the Rebbe included a copy of the sicha about the protective nature of mezuzos, and that reading the original will certainly clarify the matter. The Rebbe also utilized the opportunity to ask the professor why he doesn’t do more to stem the tide of assimilation in his circles.

In this letter and in other letters he wrote to the Rebbe, the professor often wrote aggressively and without the appropriate derech eretz. Yet, the Rebbe, with endless ahavas yisroel, took the time to respond respectfully. A powerful lesson for all of us.