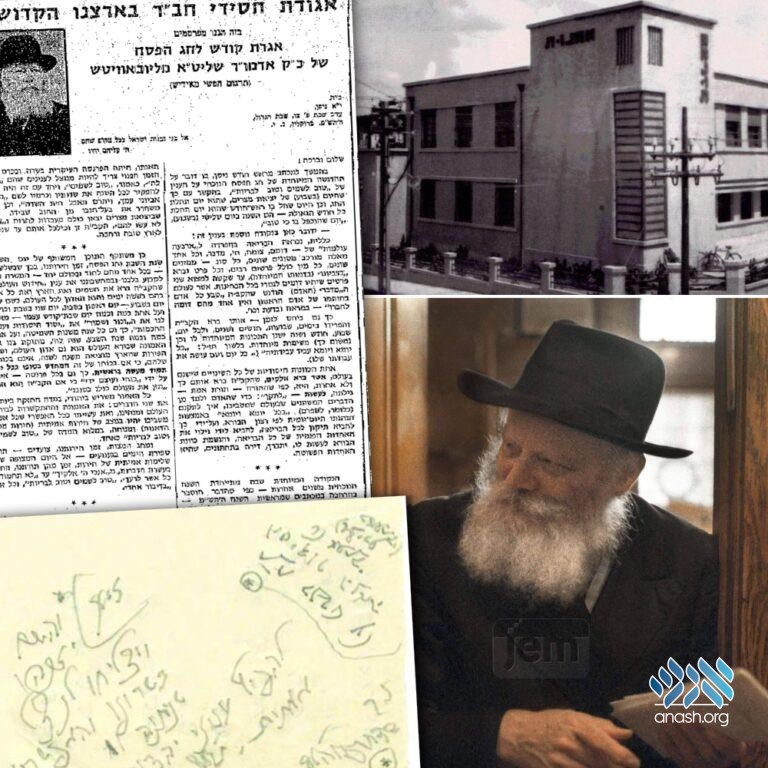 Each year before Pesach, the Rebbe would write a public letter to the Jewish people which would be disseminated throughout the Jewish world. Read the Rebbe’s note to Mr. Shmuel Gorman who would typeset the letters for the Israeli press.

Before Rosh Hashanah 5711, the Rebbe began a new custom. Each holiday, he would write a letter addressed to “the sons and daughters of our People Israel, everywhere,” where he would explain the basic meaning of the holiday and give a practical lesson that could be applied in everyday life.

The letters, written in Yiddish, were then translated into Hebrew (first by Rabbi Uriel Tzimmer, then by Rabbi Chanoch Glitzenstien, and then by Rabbi Tuviah Blau). In addition to being distributed in Chabad communities, Chabad activists would ensure that the letter was published in newspapers to reach a much broader audience.

The “Davar” newspaper regularly printed the letter. Davar identified as the “newspaper of the Israeli laborer.” It was founded in 1925 and continued to be released until 1996, and among its earliest contributors was Shneur Zalman Rubashov, later Shazar. He was also appointed as the newspaper’s chief editor after the passing of its founder, Berel Katzenelson, and he served in that position between 1944 and 1949. Davar was the most widely distributed newspaper among the Jewish population of the Holy Land, and it later became the main voice for Mapai, the country’s leading political party.

Shmuel Gorman was an observant Jew, a resident of Benei Brak, who worked as a typesetter in “beit hotza’at sefarim u’dfus omanut,” the Davar publishing house on Shenkin St. in Tel Aviv. 41 years ago, he wrote the following letter to the Rebbe:

“I have had the great merit on several occasions to typeset the Rebbe’s Pesach letter in the course of my work at Davar. With that merit, I request the Rebbe’s blessing for myself and my family. As our sages said, ‘A Tzaddik rules and Hashem fulfills,’ so may it be His will.”

Attached below are the two Pesach letters of that year, dated Rosh Chodesh Nissan and Yud Alef Nissan, as they were published in the Davar.

On Mr. Gorman’s actual letter, the Rebbe answered the following:

“I acknowledge the receipt of your letter, along with your request for a blessing and your pidyon nefesh. I will read it in an auspicious hour at the resting place of my father-in-law, the Rebbe.”

“May Hashem grant you the merit and success to utilize your talents and the opportunities placed before you to spread authentic Judaism, Torah and Mitzvos.

“With blessing, the Rebbe’s signature.

“P.S. check your Tefillin and Mezuzos.

“A special thank you for the beautiful typesetting of my letter (which you attached in your letter) with the emphasized letters etc.”

Lahak has also informed us that only several dozen sets are left in their special sale of the Rebbe’s Maamarim, in honor of Yud Alef Nissan and Lahak’s fortieth anniversary. To order, log onto www.lahak.org/sale.