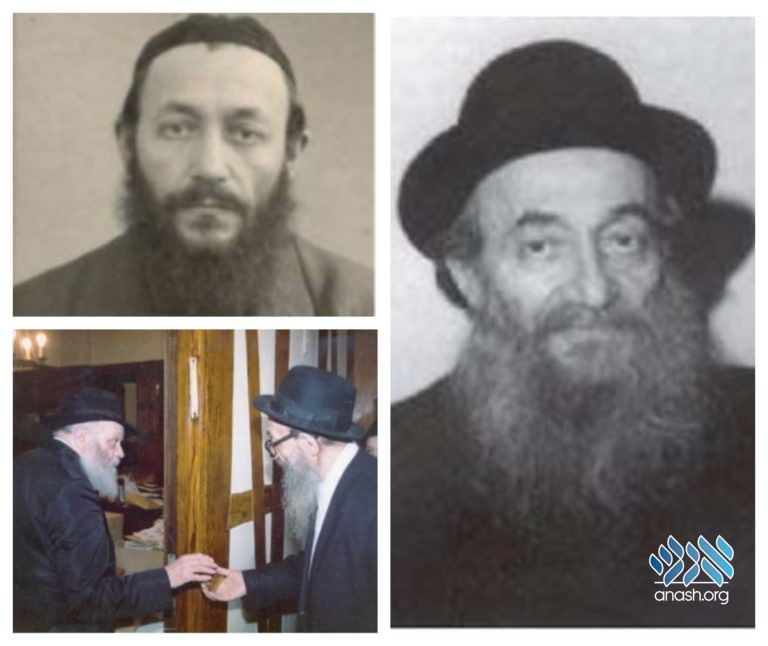 The chossid Reb Yeshaya HaKohen Matlin was born to Reb Shmaryohu and Mrs. Devorah Leah Matlin in 5660/1900 in Piryatin, Russia. His father was a chassidishe Yid who would study Imrei Bina, one of the most complicated discourses of the Mitteler Rebbe, every Thursday night. The next morning he would come to shul early, as was his custom, no one knowing that he had been up all night. Reb Shaya, as he was fondly known, related that the Rebbe once referred to him as Reb Shmaryohu. A chossid explained it was because his father’s image was reflected in his face.

, it occurred to me that you should divorce your wife, arrange for her to be taken care of, and marry Miss Bailka. In this merit, you will have children.” Miss Bailka was a step sister of the Tzemach Tzedek. After the Tzemach Tzedek’s mother, the Rebbetzin Devorah Leah, was nifter, the Tzemach Tzedek’s father, Horav Reb Sholom Shachna, remarried and had a daughter named Bailka. Reb Yeshaya Hurwitz married Bailka, and although an older man, he was blessed with children.

Reb Yeshaya was raised by his grand- father Reb Chaim Chaikel Matlin, a wealthy man. In 1921, Reb Shaya married Miss Gisa Diskin, the daughter of Horav Hagaon Reb Shimon Moshe. They were blessed with three daughters. During the time of the Soviet Communist regime, the young couple was careful not to send their daughters to Shkola, the Russian schools. Reb Shaya, with great self sacrifice, resisted anything that would cause the desecration of the Shabbos. Acting this way was considered dangerous, and the Matlin family needed to leave their city. They began wandering from one city to another. After WWII, Reb Shaya merited to see his daughters married to G-d fearing Bochurim: Reb Yehuda Halevi Schechter, Reb Shamshon Charitonov and Reb Aharon Zakon, all later of Crown Heights.

Reb Shaya became a bookkeeper, assuming that he would not be called on to work on Shabbos. Unfortunately, this was not the case. He told the authorities that the Torah prohibited him from working on Shabbos. He was asked, “If mother Russia needs you, will you do the work?” He responded that of course he would not and was stripped of all his work permits. Reb Shaya was forced to leave Piryatin for Yugatin to obtain a new work permit. When he arrived in Yugotin it was winter and he was told that a representative of an investigative board would arrive and be the one who would determine his prospects for the future.

A surprise at the appointment

In 5707/1947 after WWII ended, Reb Shaya and his family left Russia together with hundreds of Anash families. He stayed in France until 5716/1956, working as a sofer writing Tefillin, Mezuzos and Sifrei Torah. In 5716/1956, he moved to the United States.

The Mishna teaches us that the world stands on the three pillars of Torah, Tefila and Gemilas Chassodim. This was the world of Reb Shaya. Every week Reb Shaya would study with a special fervor, Torah Ohr and Likutei Torah, the chassidic discourses of the Alter Rebbe on the Torah parshyos. For many years he would learn these Maamorim with his grandchildren. It is noteworthy to mention, that he was nifter the week of Parshas Shoftim, for which there is no ma’amar in Likutei Torah.

His wife, Mrs. Matlin, a distinguished personality in her own right, taught in Bais Rivka for twenty years. She dedicated herself to this work heart to teaching and was assisted by Reb Shaya. She also compiled a sefer, Biur Tefilah, on the insights of Tefilah.

Tefila: “I get very excited that it is difficult for me to return to my norm”

In Tefila, Reb Shaya would mediate before and during the tefilos, and would daven with great concentration. In his old age, after he finished davening. He would lie down to rest. He once commented, “When I recite ‘Boruch Ato’ I get so excited that it is difficult for me to return to normal. What can I do? My mind is not controlling my heart.” Tanya refers to the strengthening of the heart on the part of the animal soul. For Reb Shaya the problem of the heart controlling the individual was related to the excitement in Avodas Hashem.

Reb Shaya was a great Baal Tzedokoh, and he constantly borrowed money so that he could loan money to the needy.

Devotion to the Rebbe

Reb Shaya’s pidyonos to the Rebbe mostly contained brochos for the Rebbe’s well-being. Selected words were used for personal requests. Every Erev Rosh Chodesh he would send ma’amod, money for the Rebbe’s personal use, and it was a big avoda for him to write his monthly pidyon.

Relationship and kiruvim from the Rebbe

Reb Shaya once wrote to the Rebbe regarding his wife’s health. A considerable period of time passed without a response from the Rebbe. He approached the Rebbe and asked about his letter. The Rebbe answered that he had not yet read the letter. Reb Shaya said, “Tzadikim are similar to their creator, the Rebbe can bless without seeing the letter.” The Rebbe gave his brocho. When Reb Shaya returned home, he told his wife “You will see, the Rebbe will also respond to the letter.” A few hours later, the Rebbe’s response came. “The time is not mine – it belongs to Hashem.”

During one of the first years of the Rebbe’s nesius, Reb Shaya approached the Rebbe to ask about an urgent matter. He excused himself for taking of the Rebbe‘s time. The Rebbe answered, “The time is not mine, the time belongs to Hashem.”

Reb Shaya suffered from an ulcer at one point and lost a lot of blood. He asked for the Rebbe’s brochoh. By a miracle, his blood level increased. His physicians could not understand how this happened. When Reb Shaya went to the Rebbe before Pesach to receive Matzoh, the Rebbe told him that Matzoh is a food of remedy. Reb Shaya asked the Rebbe if this was in a spiritual sense. The Rebbe answered, “No, this is meant physically.” Reb Shaya interpreted this to mean that the Rebbe’s matzoh worked retroactively to improve his health.

Reb Shaya once saw the Rebbe approach 770 and opened the door for the Rebbe. When the Rebbe saw him, he shrugged with his shoulder and said, “A Kohen?!” referring to the Halacha that one should not use a Kohen for personal use (see Alter Rebbe’s Shulchan Aruch siman 128). Over the course of the years, when his grandchildren would return from the Rebbe’s Farbrengen, he would test them on what they had heard and remembered from the Farbrengen.

Reb Shaya was entrusted by the Rebbe with the responsibility of checking his personal Tefillin. Acting upon the Rebbe’s instruction, he would check them in the Rebbe’s room. After the first time that he did so, the Rebbe offered to pay him. Reb Shaya refused to take the money. The Rebbe told him that if he would not accept reimbursement, he would not be able to use the Tefillin, based on what the Arizal said that one needs to pay for a Mitzvah. Chassidim once asked Reb Shaya what he could tell them about checking the Rebbe’s Tefillin. He replied, “I was asked to check the Rebbe’s Tefillin, not the Rebbe.”

On another occasion, he shared an observation with chassidim: “When the Rebbe spoke to his secretaries, trust me, it was with a great kiruv, more than that of a father speaking to his son.” Reb Shaya recalled that when he once checked the Tefillin, he thought that there might be a need for a correction to be made. He asked the Rebbe. The Rebbe responded, “I could object in this matter, but since you already brought it up, then correct it.” The Rebbe preferred his writing and he was asked by the Rebbe to write all the mezuzos for the Rebbe’s home on President Street.

In 5702/1942, the Previous Rebbe initiated the writing of a Sefer Torah to greet Moshiach. The writing began on the 2nd of Iyar. For an unknown reason, the Sefer Torah was not completed at the time. Prior to Yud Shvat 1970, the Rebbe announced that the completion of the Sefer Torah would take place in the next few weeks. The completion ceremony was early Friday afternoon, the ninth of Shvat, a day before the twentieth Hilulah, yahrzeit, of the Previous Rebbe. In the following months and years, the Rebbe would issue directives regarding when this Sefer Torah should be used to read the weekly Torah portion.

On Fridays, Reb Shaya would proofread the parsha in order to ensure that there were no mistakes and it was cleared for reading on the following day. On a later occasion, the Rebbe issued a list of designated dates on which to read from this Sefer Torah.

Personal shalach manos from the Rebbe

The Rebbe would send shalach manos to three people; a Kohen, a Levi and a Yisroel. The Kohen was Reb Shaya Matlin. For decades, Reb Shaya merited to receive shalach manos from the Rebbe. In his last years Reb Shaya became very weak and was niftar at the age of 97.