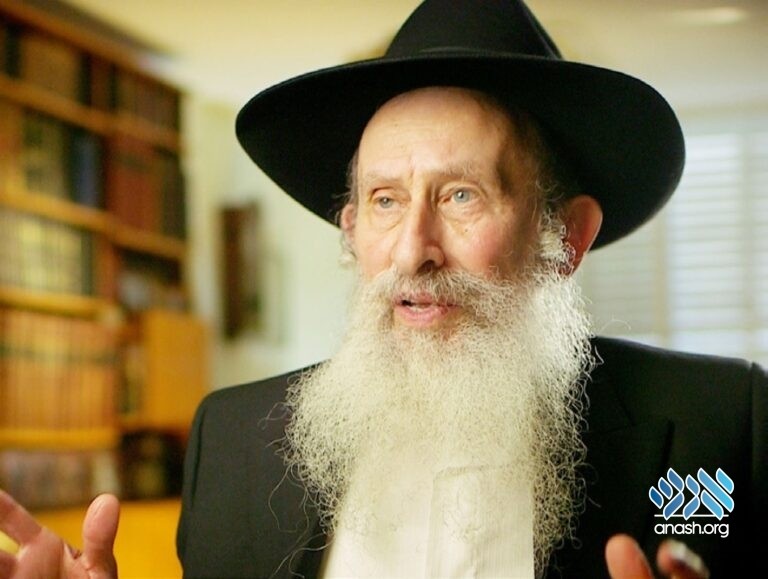 In 1961, Rabbi Aharon Halperin was part of a group of Israeli bochurim who took part in a “student exchange program” with American bochurim. In their joint yechidus the Rebbe relayed a unique instruction to the American students.

Rabbi Aharon Halperin was the head of a Chabad kolel in Bat Yam, Israel, and was responsible for overseeing the kashrut and eiruv in Kfar Chabad. He was interviewed by JEM’s My Encounter in July of 2014.

Click here for a pdf version of the story.

While studying as a young man in the Chabad yeshivah in Lod, Israel, a few of us senior students developed a strong desire to spend time in the Rebbe’s court, in the yeshivah at 770.

At the time, our entire yeshivah numbered less than forty students and there were ten of us, so the faculty was reluctant to let us go. But then in 1961, Rabbi Shlomo Chaim Kesselman, our dean of chasidic studies, proposed to the Rebbe a kind of student exchange program. While we traveled to the Rebbe, a group of American yeshivah students would come to strengthen the yeshivah in Lod. The Rebbe gave his assent.

The next step was getting student visas. The yeshivah in New York sent us affidavits declaring that they were assuming responsibility for us during our stay in the US. Then, our dean, Rabbi Efraim Wolf, began working on securing exit visas and conscription deferments from the Israeli military authorities, while we gathered the funds for our airfare. In those days, a ticket to the US went for some 1,200 Israeli pounds — about five times the average monthly salary!

We had asked for one year’s leave, allowing us to experience all of the festivals and special occasions in the Rebbe’s court, but the army granted us only one month. We decided to go anyway, and then apply for an extension from there. We joined a chartered flight of Chabad chasidim headed to New York for the holidays of the month of Tishrei.

In those days, the Rebbe would receive visitors for a private audience twice — once on arrival, around Rosh Hashanah, and then again before their return at the end of the month.

When it was time for my audience, I brought something with me: Outside my home back in Kfar Chabad, Israel, there were a few pomegranate trees growing, and I had picked the finest five I could find, as a gift to the Rebbe from the Holy Land. When his secretary Rabbi Laibel Groner presented them to him, the Rebbe instructed him to “leave one here, and bring the rest upstairs.” Upstairs in 770 was the Previous Rebbe’s apartment where the Rebbe would have the festival meals in those years. The first pomegranate, I assume, he took home.

On Rosh Hashanah night, after hurriedly finishing our own meal, we were fortunate enough to be able to enter the dining room in the Previous Rebbe’s apartment. We arrived in the middle of their meal, and I found a place to stand behind the Rebbe’s seat to observe. Towards the end, as dessert was served, the Rebbe asked if there was anything else.

When he was told that I was there, he turned around and asked me whether the fruit complied with the various Jewish agricultural laws that apply in Israel. I confirmed that they had, and he cut a piece and ate it. The other two pomegranates in the bag were distributed at the public farbrengen the following day.
All this time, of course, the question of whether we could secure permission from the army to extend our exit visa was gnawing at us.

When one boy brought it up in his audience, the Rebbe made it clear that securing the visas was the responsibility of the yeshivah faculty. So, despite having been deterred by the army’s initial response, Rabbi Wolf kept on trying.

Soon the holidays had passed, and the answer we were hoping for was yet to arrive. We and the American exchange students remained in this state of limbo all the way until the week of our return flight. After calling Rabbi Wolf, we learned, to our astonishment, that our files had disappeared and we would have to wait two more days for a response from the authorities.

When the other guests who had come in from Israel for the holidays met once again with the Rebbe before their return home, we were unsure whether to join them. The Rebbe advised us to wait: “The flight is on Wednesday. If you need to go then, you can come on Tuesday.”

When Tuesday arrived and there was still no answer, we asked Rabbi Hodakov, the Rebbe’s secretary, what we should do. “If they need, they can come on Wednesday,” was the Rebbe’s response.

If we needed. As soon as I heard that, I understood that everything would sort itself out. “That’s it!” I told my friends. “We’re staying.”

The next morning, the public telephone in 770 rang. Rabbi Wolf was on the line, with exciting news: “You’ve received a three-month extension!”

A week after that, we joined the Americans who were about to head out to take our places at their audience with the Rebbe before their departure. At this audience, the Rebbe told us something very powerful: When a person has to move from one place to another, the point is never to “just leave the previous place behind without taking anything from it.” Rather, since every place has something unique, one should try to incorporate the “positive aspects of both places.”

In our case, since every yeshivah has its unique strengths, the Rebbe encouraged us to uphold the standards of both the institution we had come from and the one we had come to — for our own personal good, and ultimately to uplift the entire yeshivah to which we were traveling.

He also had some specific guidance for the Americans going to Israel. “Generally,” he said, when flying to Israel, “one meets other Jews on the plane, who are also traveling there.… Try to impress upon them … in a pleasant manner, that they are traveling to the Holy Land.” No matter how a person conducted themselves previously, when coming to the Holy Land, they ought to act in the way G-d wants them to.
Later on, Rabbi Hodakov suggested that we appoint a representative who would be responsible to report regularly to the Rebbe on our efforts to put his words into practice. I was chosen for this task and we got to work.

After three months, we applied for another extension, but this one was denied; we would finally have to return. After a few more weeks of trying, our flight was booked for the 17th of Adar 1, and an audience was scheduled with the Rebbe for the same day.

When we entered the Rebbe’s room, to our surprise, we saw that he was in Shabbat attire. He delivered a chasidic discourse and gave each of us a copy of the Tanya, as well as a dollar coin. Through Rabbi Hodakov, he also gave us each 50 Israeli pounds towards our travel expenses.

In that audience, the Rebbe asked us to share what we had seen and heard during our time in 770 with other students at the Chabad yeshivot in Israel, and that we keep on sending written reports of our activities.

We did that. And every year on the 17th of Adar, our group gets together, to study, to farbreng, and to recall how, in that farewell audience, the Rebbe encouraged us to carry on in our work.