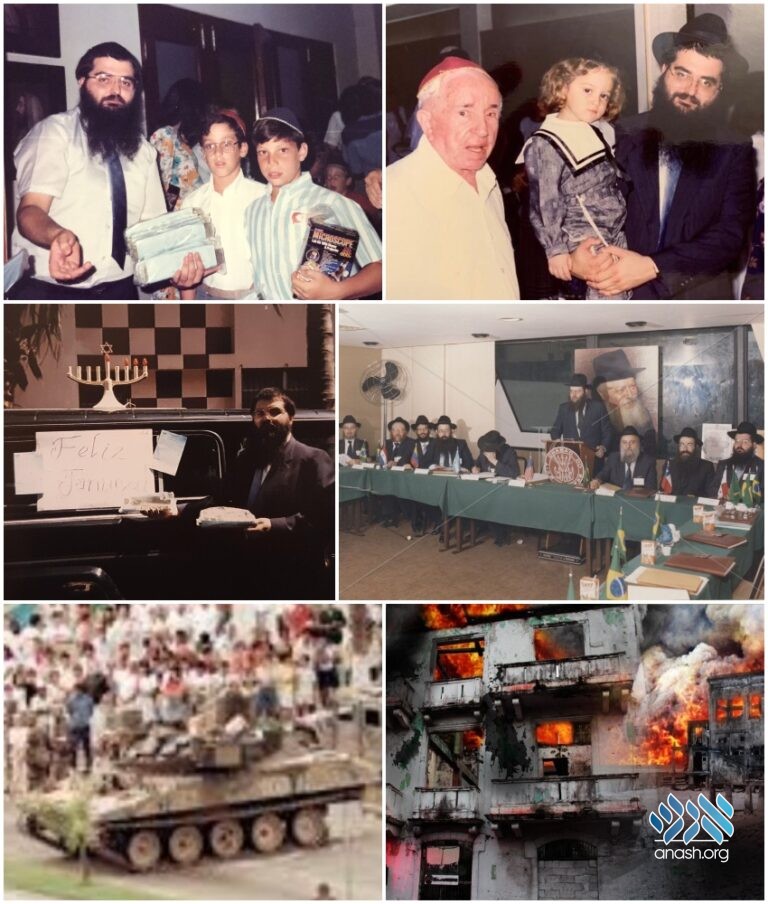 In 1989, the United States military invaded the country of Panama and overthrew its government. Facing imminent danger, local Shluchim Rabbi Zushe and Esther Wilhelm turned to the Rebbe’s secretariat for guidance.

In December 1989, the United States military invaded the small Central American country of Panama and overthrew its military dictator.

In light of the ongoing war in Ukraine, many shluchim the world over reached out to Mrs. Esther Wilhelm, to recount the directives she received from the Rebbe during that difficult period. Anash.org presents her fascinating story to our readers.

In 5746, the Ashkenazi community in Panama City (affiliated with the Beth E-l synagogue) sent a request to 770, saying that they were looking for a new Rav. The Rebbe’s secretary Rabbi C.M.A. Chodakov spoke to Rabbi Zushe Wilhelm, who knew Spanish, and suggested that he take the position.

Rabbi Chodakov made it clear that if he went, it wouldn’t only be as a Rav of the community but also as the Rebbe’s shliach. He would be tasked with arranging programs independent of and beyond the parameters of the shul.

Indeed, immediately upon arriving there, Rabbi Wilhelm opened a Gan Yisrael day camp which was attended by many children. He also transformed the synagogue into an Orthodox shul with a mechitzah.

At first, there was some opposition. During the Wilhelms’ first Friday night there, one of the members, Mr. Julio Dovid, walked out of shul. He stated, “I will not pray in a synagogue divided by the Berlin Wall!” Rabbi Wilhelm remained firm in his resolve, yet he handled the matter bedarkei noam. After Shabbos, he called Mr. Julio Dovid and conversed with him. It wasn’t long before they became best friends!

The Wilhelms spent three successful years servicing the Jewish community of Panama. However, this was not to last. Tension was mounting between the United States and the military ruler of Panama, General Manuel Antonio Noriega.

In 1986, allegations arose concerning Noriega’s history as a drug trafficker, money launderer, and CIA employee. The United States government disowned Noriega, and he was indicted by federal grand juries in Tampa and Miami on drug-smuggling and money-laundering charges. Panama was placed under economic sanctions, and Panamanian assets on American soil were frozen.

Things came to a head in March 1988. The Panamanian government charged that the United States was waging a “non-declared war” against Panama, and a state of emergency was declared.

When Rabbi Wilhelm’s father-in-law, R’ Moshe Sperlin a”h, read the newspaper, he became very anxious and worried. Phone lines and electricity in Panama were down at the time, so he was unable to communicate with his children.

When the situation worsened, R’ Moshe ran to 770. He entered the Merkos office and frantically exclaimed that he was unable to reach his children in Panama. Not even having had a chance to write a letter to the Rebbe, he asked Rabbi Groner to go to the Rebbe immediately and ask him what his children should do.

Rabbi Groner told him to go home, promising to call him as soon as he would get an answer from the Rebbe. R’ Moshe left 770; however, even before he reached the last step outside 770, Rabbi Groner came running after him.

“R’ Moshe, please come back,” he called out. “I just went to the Rebbe, and the Rebbe told me to tell you as follows: Your daughter and her three young children should come back to the United States. However, your son-in-law Rabbi Wilhelm should stay with his community as long as he possibly can. The Rebbe then said that you should be in touch with the Rav, as well.”

It was very difficult to place a phone call to Panama from the United States. Schools and banks were closed. Since the United States had frozen Panamanian assets, credit cards (based on American banks) could not be used. Provisions could only be obtained with cash. Civilians were not permitted to drive in the street.

During the next few days, the Wilhelms remained at home. The family sat at the window, watching soldiers march down the street, tanks rolling by, and fires burning. Berel and Chaim Yisroel, the two older Wilhelm boys (both young children at the time), still remember the gunshots fired into the air as a show of force.

(These gunshots also affected Levi, the youngest child. Later, his speech was delayed, and the doctors attributed this to the loud sounds he had heard as a baby.)

The Wilhelms were unable to purchase tickets to the United States, as they did not have the available cash. Esther Wilhelm’s parents sent them tickets via Telex. Esther had to stand on a line over a block long to enter the Eastern Airlines Building to pick up the tickets. Boruch Hashem, she arrived in New York safely with her three children, while her husband remained in Panama.

The next day, when Rabbi Wilhelm was in shul, gunshots were fired into the building.

Rabbi Wilhelm realized that he was being subject to a game of “tug of war” between the opposing sides. If he accepted either offer, the other side would view him as an enemy and consider him a legitimate target. In the end, he was able to avoid both of them. He explained that this increased security would heighten the fears of his community members, and they would be afraid to attend synagogue. Hearing this explanation, they relented.

Rabbi Wilhelm began to see signs of animosity with his non-Jewish neighbors. As an American Jew, and a Rabbi no less, they would call him gringo to his face—a derogatory word for American in Latin America. The common people were very upset at the United States for their unwanted intervention.

Several tense and scary weeks went by. Throughout this time, Rabbi Wilhelm continued to encourage the Jews remaining in Panama.

Although they were obligated to protect anyone on Panamanian soil holding an American passport, the situation no longer permitted this. To stay protected, he would be required to either leave the country or relocate to the American military base. Rabbi Wilhelm refused both offers, following the Rebbe’s directive that he stay with the Jewish community.

Seeing that he was serious in his resolve, he was given four code words and told that he must abide by them. The words were alpha, brava, charlie, and delta. Each word signified a varying level of danger and the associated precautions he must take. These words would be heard on the American channel of the little transistor radio given to him.

By now, the United States had suspended all military and economic aid to Panama. On March 16, there was an attempted coup against Noriega; it failed, demonstrating that Noriega still had support from the majority of the Panamanian Defense Force. The U.S. began to realize that economic pressure alone would not succeed in removing Noriega from power, and defense officials were floating the idea of military intervention.

Three weeks later, on a Thursday, the electrical grid in the country collapsed. The supplies of kosher food in his freezer would spoil within a few days, and all lines of communication were cut off. Rabbi Wilhelm realized he needed to escape before it would be too late. The situation was only worsening and becoming more dangerous. Concern was expressed that failure to capture Noriega soon after the initial assault might allow him to flee to the hills and organize guerrilla warfare. He might also order the abduction or killing some of the nearly 35,000 U.S. citizens residing in Panama.

Having no luck in communicating with his relatives abroad and afraid for his life, he realized that it was time for him to leave. He had stayed in Panama as long as he possibly could, as the Rebbe had instructed. He decided to make a run for the airport.

Rabbi Wilhelm left his apartment with all his belongings behind, running with nothing more than a small bag. But how would he secure a ticket without any cash? Luckily, the day before, he had met the director of Bank Leumi. He had let Rabbi Wilhelm in through the back door of the bank to withdraw some cash from his bank account.

On his way to the airport, as he was passing a statue of President Roosevelt, he was surrounded by a group of soldiers. This statue was a tribute to the United States for helping Panama create the Panama Canal. However, this bronze statue was now completely destroyed. The head had been chopped off and it was covered with red paint.

Rabbi Wilhelm was asked to get out of the car. He was questioned at great length and frisked for any ammunition. He begged one soldier to let him leave, as he was more than halfway to the airport to be reunited with his wife and children. Finally, they let him go.

At the terminal, he met many Jews who hadn’t yet left the country. One of them said to him emotionally, “Rabino, this is literally the Exodus from Egypt!” They began chanting, “Yetziat Mitzrayim, Yetziat Mitzrayim!”

No flights were leaving that day, so Rabbi Wilhelm slept on a bench in the airport. It was only Friday morning (Erev Shabbos Hagadol) when they announced that one plane would be leaving Panama, its destination unknown. Panama was not allowing any planes to fly to the United States.

All the people present wanted to board that plane. Miraculously, Rabbi Wilhelm was able to board. Only after takeoff were they told that they were headed for Puerto Rico.

Rabbi Wilhelm was able to take a flight from there to Miami. He arrived there as the sun was setting, making it just in time for Shabbos Hagadol. His brother-in-law, R’ Michoel Lozenik, arranged for him to be picked up at the airport, given a kapote, and brought straight to shul.

Thanks to the Rebbe’s instruction, Rabbi Wilhelm had helped his community during those trying times, while leaving when he needed to, before the worst of the violence took place. Just a short time after Rabbi Wilhelm left, US invaded Panama and the situation was terrible.

Once in the United States, Rabbi Wilhelm took a position as Rosh Yeshiva in Oholei Torah. However, he continued to maintain ties with the Jewish community of Panama. Since that most challenging time, Rabbi Wilhelm visited Panama many times, bringing the light of Yiddishkeit and the Rebbe to the Jews of that country.