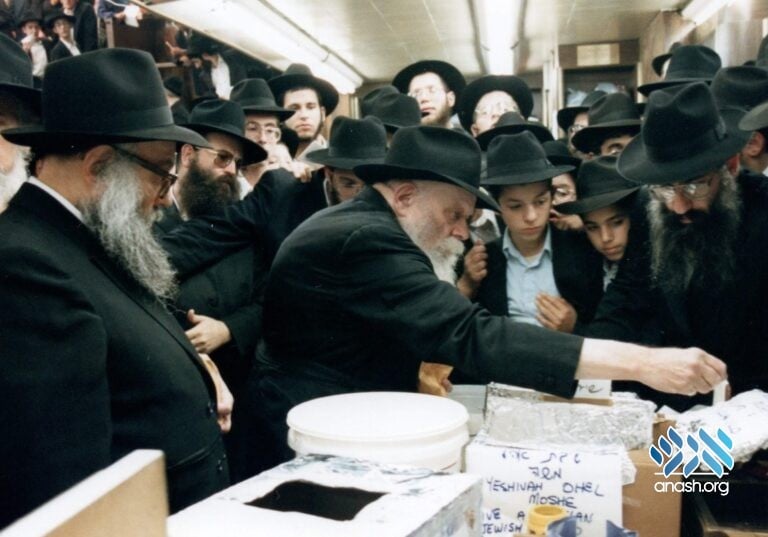 Following the culmination of Tishrei on Zayin Cheshvan, this is the time to reflect on a time-honored minhag instituted by the Rebbe, and reiterated every year on Simchas Torah and/or Shabbos Bereishis.

Following the culmination of Tishrei on Zayin Cheshvan, this is the time to reflect on a time-honored minhag instituted by the Rebbe, and reiterated every year on Simchas Torah and/or Shabbos Bereishis.

The virtue of the mitzvah of tzedakah is a recurring theme in the Rebbe’s torah and leadership. Indeed, we saw the Rebbe’s unparalleled dedication to the performance of this mitzvah in the countless coins and dollar bills he distributed to charity.

The Rebbe shared his devotion to this mitzvah with all of us by founding the Keren Hashana charity fund, which would guarantee that the donors perform the mitzvah of giving to tzedakah every single day of the year.

The Keren Hashana fund, by Machne Israel, dispenses money to charity every day on behalf of the participants in the fund.

This ground-breaking charitable fund was established by the Rebbe to nurture the habit of daily charity giving. Participants need make only one annual donation, and the fund disburses tzedakah twice every single day on their behalf.

The Rebbe advised that the Keren Hashana donations be made also on behalf of all members of the family.

To those who missed out donating at the beginning of the year, the Rebbe indicated that even joining the fund at a later date, gives the donor the merit of all prior days as well.

Year after year, for forty years, the Rebbe enthusiastically encouraged us to join and donate to his fund, ensuring great blessings for the participants, and guaranteeing that no day will go by without a donation to charity.

Thankfully, Machne Israel has faithfully continued this holy tradition giving donors the zechus of participating in the Rebbe’s special charity fund. The program is open to all and is available here: Keren Hashana. If you haven’t joined yet, it is never too late

The following is an excerpted, free translation of the inaugural talk by the Rebbe:

It is known that all blessings from Above, for all our needs, come via the mitzvah of tzedakah.

Since this year is a leap year containing 383 days [this year it’s 384, Ed.] — I propose that everyone donate to charity in the amount of 383 half-cents, cents, nickels, dimes, dollars, 100 dollars, 1800 dollars, through which all the blessings will come down to him/her, materially and spiritually.

It is self-evident that one must give according to his or her capabilities, as “a wealthy person who offers up the sacrifice of a poor person has not fulfilled his obligation.” (Mishna, end of Negaim)

As it is very possible that one may forget to give to tzedakah every single day, as well, in order to ascertain that the  donation go to the proper purpose, those who want to rely on me can donate on my discretion, to the fund that exists here, from which charity is dispensed every day. In this way it will come to its proper place.

What is the advantage of giving to a fund, and of disbursing the funds from this Fund in particular?

There are two parts to Charity:

Achieving the second part, and in its greatest form, is only possible when the donation is given to a fund, in which the money is blended with the rest of the money in the fund. Thus, the giver has a part of every amount dispensed from the fund.

Another great advantage of giving to this fund:

We are already several weeks into the new year. What will be of the days that already passed? What happens to the download/blessings of the already passed weeks, Shabbosim and days of Yom Tov?

The solution to this is found in the laws of the Half-Shekel. Although early giving was strongly encouraged, yet, even those that for various reasons were late with their giving had a part even in the disbursements done before their donation was received.

The same applies to the Keren Hashana fund: even the donors whose donations are received at a later date have a part in the disbursements already done at the beginning of this year.

Yet, it is very very appropriate that the money be given sooner, immediately tomorrow. In addition to the ultimate value of zerizus/alacrity, it is important to donate the fund tomorrow, as the Fund needs to disburse funds every day, and it is dependent on the donors.