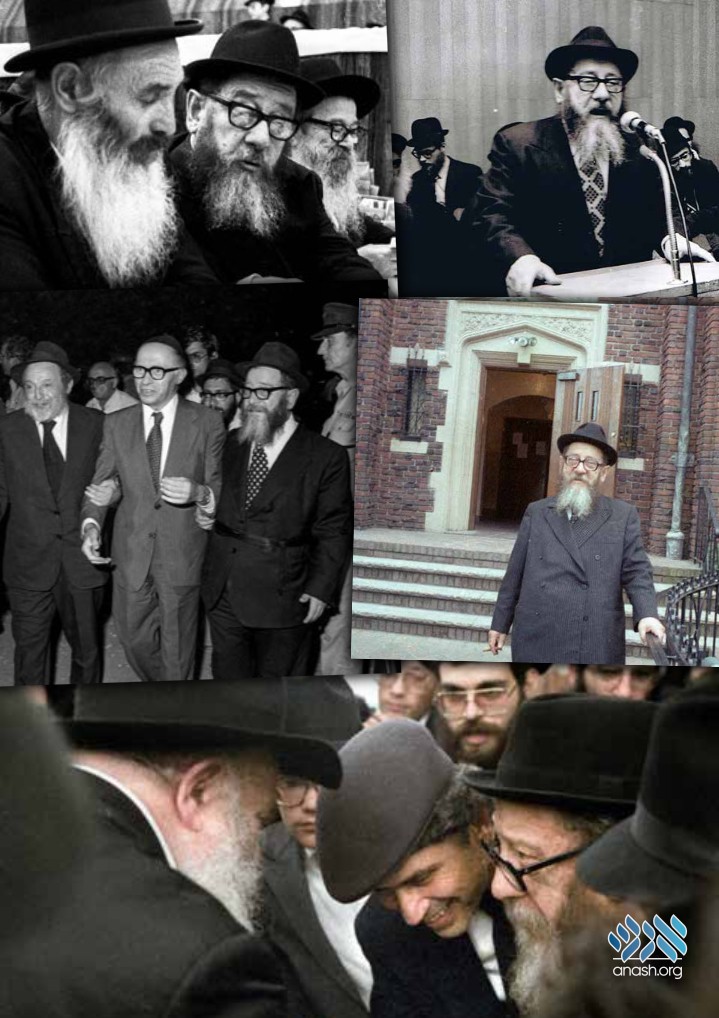 Reb Avraham Parshan was a talmid chacham and philanthropist who, on a moment’s notice, could jump onto a plane to fulfill a mission, donate huge funds at the Rebbe’s request, or put in countless hours in solving a moisad‘s issue. Marking his 35th yahrtzeit.

Rebbetzin Chana’s levaya, was attended by massive crowds, and a special security team was recruited to help control the situation. At the beis hachayim, the chevra kaddisha were confronted with an issue. They wanted to remove the bottom of the aron, but they were hesitant to proceed with the security guards present.

As the crowd waited silently, the Rebbe’s discomfort became very apparent. The Rebbe had already expressed his disapproval regarding the way the levaya was handled, and by the presence of the many bochurim jostling for a position. It was clear that the Rebbe was very disturbed by this issue as well.

Watching the situation, one Chossid did some quick thinking. He gathered the security team and began a discussion with them.

“You’ve all been an amazing help. Are you allowed to accept tips?”

A discussion ensued. Meanwhile, the funeral was able to be completed according to halacha and the happy members of the security team walked away with a $100 tip.

The Rebbe later told Reb Zalman Gurary that Reb Avraham was a good example of resourcefulness and Chassidishe cleverness. Reb Avraham later received a Machne Israel tax receipt for $100 in the mail.

Reb Avraham was born in 5670 in Lodz, Poland to a family of Sochatchover Chassidim. After his marriage, he settled in Tel Aviv, but tragically, his wife passed away leaving him with two young children. He soon remarried into a distinguished Yerushalmi family and moved to Yerushalayim, where he became a respected member of the Pag”i movement (“Porshei Agudas Yisroel”).

“During the War of Independence in 5708, my father took responsibility for his fellow Jews. He organized caravans to smuggle food and vital supplies to the city. On several occasions, his van was riddled with bullets, and on one occasion, bullet holes were even found in the bread he was carrying, but miraculously, he was not hurt.”

In 5714, Reb Avraham emigrated to Toronto. Finding himself in a new location, he visited many Rebbes, roshei yeshiva and rabbonim, searching for a place to call home. A Lubavitcher Chossid named Reb Chaim Leima Minkowitz brought Reb Avraham to 770, where he participated in the Rebbe’s Shabbos Mevorchim farbrengen and went into yechidus. Expressing himself to his friends, he shared that he finally felt that he had found his place. The experience by the Rebbe gave him the impression that this is a Rebbe of klal Yisroel, genuinely involved in caring for Yidden all over the world.

“My grandfather knew many Rebbes in Eretz Yisroel,” says Reb Avraham’s grandson, Rabbi Yaakov Biderman of Vienna. “Nevertheless, after his yechidus, he told Reb Chaim Leima with tears in his eyes, ‘Chaim, this is the first time I felt that this was my Rebbe.’”

“He always looked for reasons to come to the Rebbe,” says Rabbi Biderman. “Every yoma depagra, every farbrengen, he was always there.”

Over the years, the Rebbe constantly involved Reb Avraham in a wide array of Chabad activities. He didn’t just contribute towards the costs; he was actively involved in the planning and execution of the activities, never too tired or too busy to roll up his sleeves and get involved.

Whenever the Rebbe announced a new initiative, Reb Avraham would be a primary supporter. When Chabad of Paris sought to buy its first Chabad House, Reb Avraham provided the funding. The first mitzvah tank was purchased by Reb Avraham as well.

“When the Rebbe spoke about saving the Jewish community in Crown Heights in 5729,” Rabbi Biderman relates, “my grandfather went ahead and bought eight buildings.”

“Certain projects were especially precious to my grandfather,” says Rabbi Biderman, “especially institutions that were named in memory of the Rebbe’s parents. He always looked for ways to give the Rebbe nachas.”

“Before one yechidus with askanim from Toronto,” Reb Yosef Parshan relates, “they decided that they needed to bring up certain complaint which needed the Rebbe’s attention. But the individual who planned to bring up the issue got cold feet and decided to push the issue onto my father. He told the Rebbe, ‘Reb Avraham would like to tell the Rebbe something.’

“My father was no fool, and he wasn’t about to become their conduit to tell the Rebbe something that would bring the Rebbe agmas nefesh, so he remained silent.

“Looking at him, the Rebbe said, ‘Reb Avraham, emes takeh es shteit, ‘Milah biselah ushtikusa bitrei,’ uber az ir vet reden asach, vet ir hoben asach selaim. Indeed, the Gemara says, ‘A word is worth a selah, but silence is worth two.’ But if you speak, you will have many selaim.’

“Commanded by the Rebbe to speak, he decided to say what was really on his heart. He told the Rebbe how uplifting Sukkos and Simchas Torah had been in the Rebbe’s presence, and how hakafos brought a real inspiration to the Chassidim, and how they all wish the Rebbe continued health and nachas from the Chassidim…”

One of Reb Avraham’s most lasting legacies was in Eretz Yisroel, where he contributed generously to many institutions.

When the government gave Chabad a large lot in the city of Lod to build apartments, investors were needed. The Rebbe said that he would personally cover one-third of the cost of construction, the government will cover another third, and, the Rebbe suggested, Reb Avraham would cover the last third.

It didn’t seem like it would be a profitable deal. There were no customers on the horizon, but the Rebbe informed them that Russian immigrants would soon be arriving.

Reb Avraham took the deal and became heavily involved in the project. Suddenly, the gates of the Soviet Union opened and floods of immigrants poured into Eretz Yisroel. The government was in dire need of apartments, and they bought a number of blocks for a good price. Reb Avraham was able to provide these people with a proper home and make a sizable profit as well; he gave the proceeds to build the yeshiva dormitory, the mikveh, and shul.

During one kos shel bracha, the Rebbe asked Reb Avraham if he planned to go to Eretz Yisroel. He spontaneously answered, “Yes,” so the Rebbe gave him a bottle of mashke and said, “You’re probably going to the wedding.”

He soon realized that Rabbi Dovid Shalom Pape, a former professor who had become a baal teshuvah, was scheduled to get married a few days later in Eretz Yisroel.

“My father was a businessman from Toronto,” Reb Dovid Shalom relates. “while the kallah came from the Sephardic community in Dimona. Understandably, there were differences between the family backgrounds and no one was running the wedding. Reb Avraham took on the mission of ensuring that everything would proceed calmly and joyfully. With his charm and ahavas Yisroel, he made sure everyone felt comfortable and that nobody was left out or hurt.

“It didn’t end there. Later, when we came to America, Reb Avraham introduced us to his family, and we are close friends until this day.”

When Chabad retook control of the Tzemach Tzedek Shul in Yerushalayim, an individual had settled in on the top floor and his behavior was unbefitting of the holy site. A battle began to evict him from the premises, but it proved to be very difficult on a legal basis. The Rebbe was very unhappy with the state of affairs.

“When my grandfather saw the situation,” says Reb Mayer Parshan, “he brought the man to his own personal house in the Old City. It was in a better location and was worth more money. My grandfather offered him a tradeoff; he could have the house if he relinquished control over Tzemach Tzedek. The individual agreed, and they went right away to a lawyer to make the exchange.”

During the sefarim trial, Reb Avraham got involved in a certain factor of the case. He wrote to the Rebbe about it, and said that this was his “etzba ketana, little finger,” his little part.

The Rebbe responded: “A small finger?! You have done this ‘with all your heart,’ and have caused infinitely more nachas than a little finger. I will mention it at the Tziyon.”

Reb Avraham was mekarev his personal doctor, and in the course of coming closer to Yiddishkeit, the doctor wrote the Rebbe a letter and mentioned him in it. The Rebbe responded in a very special way:

“I am most gratified to note the personal attention and concern you have shown towards your patient,” the Rebbe wrote. “Our mutual friend is truly an outstanding person who lives by the Torah, and particularly, by the great principle of the Torah, v’ahavta l’reacha kamocha.”

Reb Avraham passed away on 11 Iyar 5746, leaving a beautiful family of Chassidim and shluchim.

To read the complete profile of Reb Avraham in A Chassidisher Derher, click here.