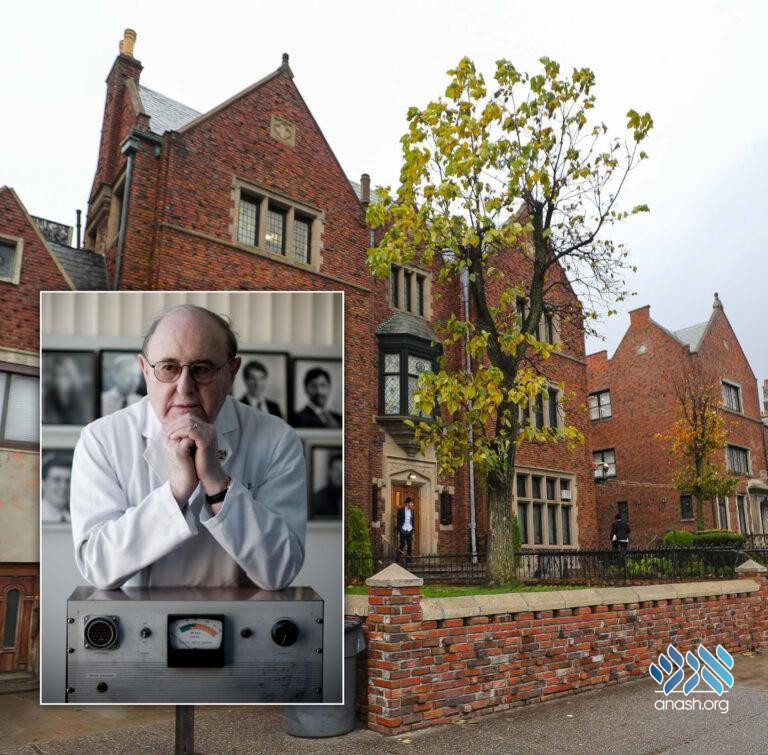 Dr. Bernard Lown, a world-renowned inventor and cardiologist, who served as part of the team treating the Rebbe in 5738, passed away this week. Maryland Head Shliach Rabbi Shmuel Kaplan, who had a close relationship with Dr. Lown, told Anash.org stories he heard from the doctor first hand.

Dr. Bernard Lown, a world-renowned cardiologist who invented the first reliable heart defibrillator and served as the senior doctor on the Rebbe’s medical team following his heart attack in 5738, passed away on Tuesday, 4 Adar.

Maryland Head Shliach Rabbi Shmuel Kaplan’s father, Rabbi Moshe Binyamin Kaplan a”h, was the one who brought Dr. Lown to the Rebbe, and maintained a relationship with him over the decades. Rabbi Kaplan sat down with Anash.org to relate, for the first time, some of the stories he heard directly from the doctor.

Anash.org: Rabbi Kaplan, thank you for taking the time to talk with us. How did you come to know Dr. Lown?

Rabbi Kaplan: Dr. Lown is actually a relative of mine, his mother and my father were first cousins. My father knew that Dr. Lown was a professor of cardiology at Harvard University that is why he thought of him when he heard that the Rebbe had suffered a heart attack in middle of Hakafos in 5738.

A: Did it take any convincing to get him to come to 770? He was already a world-renowned cardiologist at that point.

RK: It was actually his mother who got him to come. The way it played out was as follows:

A few days after Yom Tov, my father went to 770 to speak with Dr. Weiss about it and Dr. Weiss said it would be wonderful if he could bring Dr. Lown to the Rebbe. Dr. Weiss had been a student of Dr. Lowns. So my father called his cousin, Dr. Lown’s mother in Boston and asked if it would be possible to speak to her son. She told him that he was in the USSR, treating Soviet officials, as he was the official cardiologist of the USSR ‘ruling class’. However, when he told her why he was calling, she said if it is for the Lubavitcher Rebbe, she would tell him that it was important that he come back. And he did!

A: What happened when he arrived in Crown Heights? How long was he there for?

RK: Dr. Lown only stayed in Crown Heights for a short time on each of his visits. Every couple of months he would travel to Crown Heights, examine the Rebbe and leave. I made sure to come to Crown Heights from Maryland many of the times to spend time with him.

On the first time he arrived in Crown Heights, he came over to my father’s house to stay. Before he visited the Rebbe, Rabbi Leibel Bistritzky, who was the Hatzalah coordinator at the time, came to speak to him about an important matter.

At the time, with all that was happening, there was a level of unclarity about the Rebbe’s care. Rabbi Bistritzky came to speak to Dr. Lown and to make sure that he would report back directly to the Rebbetzin.

Indeed, immediately after he finished his examination of the Rebbe and offered his diagnosis, Dr. Lown went upstairs in 770 to meet with the Rebbetzin and spent some time in conversation with her. After his meeting, when I asked him for his impressions, he said that the Rebbetzin was “regal”.

A: Did he share with you anything regarding the actual heart attack and the effect it had on the Rebbe?

RK: Yes, Dr. Lown shared with me a number of observations. Firstly, he concluded, based on his examinations, that (contrary to what the other doctors thought) the harsher heart attack was actually the first one, which occurred in the middle of hakafos, and not the second one later that night.

He told me that what the Rebbe did following the heart attack was simply humanly impossible. The Rebbe finished hakafos, walked up a flight of steps, went to the Sukkah, made Kiddush, and went back into 770. For the amount of damage that the Rebbe’s heart had suffered at that moment, there was no logical way all that could have been done.

“Such a thing could only have been done by a person who has a mind that totally drives his body,” he told me.

A: What was his opinion about treating the Rebbe in 770? Did he agree, or did he feel that the Rebbe should go to a hospital?

RK: Dr. Lown actually was a strong proponent of a new way of treating heart attack patients that made him strongly agree with the Rebbe’s decision to stay in 770.

Dr. Lown’s treatment was known as the “chair treatment,” which involved getting heart attack patients out of bed as soon as possible. He also believed in treating the whole person, instead of focusing on just the heart. In light of those views, he felt that for the Rebbe, staying in 770 was beneficial to Rebbe’s general state of mind, and therefore better for his recovery from the heart attack.

A: Did he share any other stories of the Rebbe’s attitude towards recovering from the heart attack?

RK: Yes, I’ll relate another story he told me. When he came to examine the Rebbe the first time, he wanted the Rebbe to stop opening and reading the mail for six weeks in order to regain his health.

The Rebbe refused. The Rebbe explained that many of the letters that were sent to him were dealing with matters of life and death. Now the doctor wanted him to refrain from reading six week’s worth of mail so that he would be able to help those who turned to him afterward. But the Rebbe refused, saying, “On what basis can one say that helping the later people should take precedence over helping the earlier people?”

When Dr. Lown told this to me, he said that it was incredible that nowhere in that equation did the Rebbe mention his own well-being. It was only a question of helping this group of people or that group of people.

A: Did he have any stories with the Rebbe in later years?

RK: Yes, he continued visiting the Rebbe many times over the coming year and a half, and spent hours in conversation with him. He told me about some of the conversations, but they are not for a public forum.

The Rebbe asked if he knew how to blow shofar. When he answered in the affirmative, the Rebbe asked “If I would give you shofar would you blow it on Rosh Hashana in China?” Dr. Lown, who actually came from a frum background and studied in the Telshe Yeshiva in Lithuania before immigrating to the USA, said that he would. The Rebbe gave him a shofar, and with that, Dr. Lown left.

A few months later, when Dr. Lown visited again the Rebbe asked him if he had indeed blown the shofar, and Dr. Lown said that he had.

“The Rebbe expressed excitement at my answer, telling me that for many years the sound of the shofar had not been heard in China, and now I had brought the sound there as well,” Dr. Lown told me.

A: Thank you Rabbi Kaplan for taking the time to share these fascinating stories with us. May Dr. Lown’s neshama have an aliya, and may the merit of serving the Rebbe stand by him.