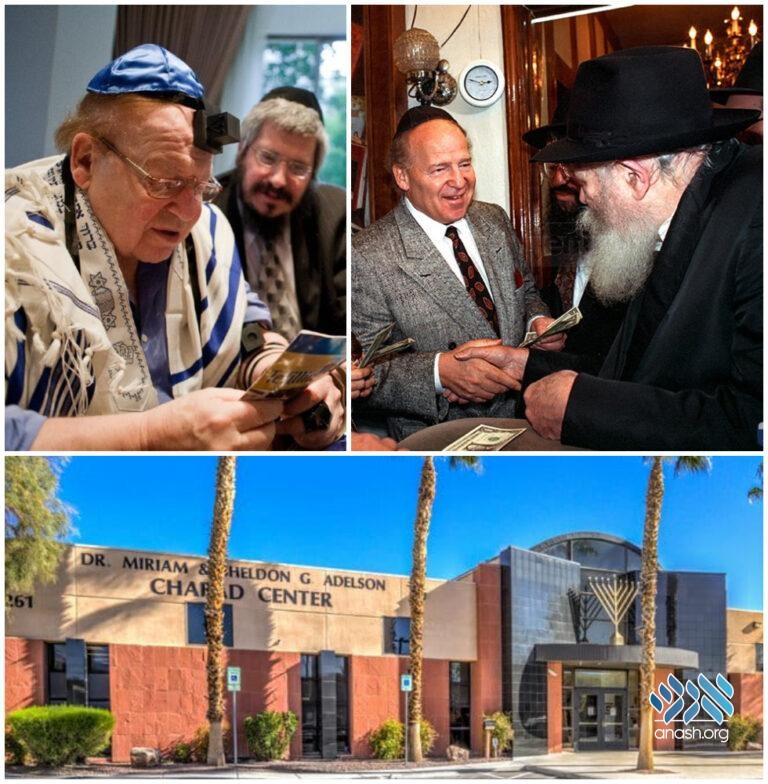 Sheldon Adelson will long be remembered as a bold serial entrepreneur and champion of myriad charitable causes. But above all, he was a proud Jew with a strong connection to Yiddishkeit.

By Menachem Posner and Dovid Margolin for Chabad.org

Sheldon Adelson, who passed away on Jan. 11 at the age of 87, will long be remembered as a bold serial entrepreneur who put his substantial fortune (estimated at $33.5 billion) to work supporting medical research; promoting Jewish security, education, identity and continuity; and leaving his mark on world events.

More than anything else, the clever and tough businessman, generous employer and champion of myriad charitable causes was driven by his deeply-felt Jewish identity.

“He truly was a proud Jew,” says Rabbi Shea Harlig, director of Chabad-Lubavitch of Southern Nevada in Las Vegas. “He wasn’t just proud of being Jewish, but of Torah and mitzvot as well. Whenever I came to him to do a mitzvah—put on tefillin, shake the lulav and etrog, with shmurah matzah—there was never a debate, it was always, ‘Let’s do it.’ ”

Harlig first met Adelson and his wife, Dr. Miriam Adelson, in 1991, not long after the young rabbi had established Chabad in Las Vegas with his wife, Dina. Over time, their relationship grew, and the Adelson family name graces the Harligs’ Chabad center—one of eight Chabad centers in Las Vegas.

“We are just as proud to have our names on this building as we are to have it on the Venetian,” said Adelson, referring to his iconic Vegas hotel, in a video marking Chabad of Southern Nevada’s 10th anniversary.

While many will focus on the major causes Adelson supported, as well as his externally pugnacious personality. Harlig says few know the countless unsung acts of kindness he performed, asking for no accolades and expecting nothing at all in return.

“I’m not family—I’m not Sheldon’s responsibility, just a friend who worked with him professionally,” says Mike, a member of the Las Vegas Jewish community whom Harlig has known well for 30 years. “I ran into very hard times and turned to Sheldon. He didn’t have to help me at all, let alone as much and for as long as he did.”

Mike had been doing well financially until then, and for the first time found himself on the other side of needing help.

“I explained what was going on, and Sheldon said he’d discuss it with Miriam,” recalls Mike. “Twenty-four hours later, Sheldon called me apologizing for not having gotten back to me sooner, and said yes, he and Miriam would help. After that, he continued to provide for my family and me with continued kindness and compassion.”

Because of Adelson’s quiet support, there was food on his table, his children could remain in college another year and the high cost of pursuing justice against his goliath former employer was not an insurmountable obstacle. To this day, Mike is moved by Adelson’s sensitivity, especially Adelson apologizing for the one-day response. “You could tell he knew what it meant to be in need,” he adds.

That giving was not only for honor and prestige, but the duty of every individual was something he learned from his father, a Lithuanian-born cab driver in Boston.

“I recall one of the most important lessons I learned from my father,” Adelson wrote in an April 2020 op-ed in the New York Post. “He would come home from work—when he could find work, that is—and put loose change in the family pushke. When I asked why he would give to others when we had so little, he would say, ‘There is always someone whose need is greater than ours.’ ”

His hardscrabble upbringing in Boston’s old Jewish neighborhood of Dorchester, where he regularly faced anti-Semitism on the streets, would shape his commitment to strengthening Jewish pride and the Jewish people itself. It’s why he gave millions to help support Israel and local Jewish organizations across the religious and political divide, and why he consistently supported a number of Chabad institutions around the world—from Boston to Washington, D.C., Moscow to Vilnius, from which his father hailed.

“Anyone who is concerned about Jewishness and assimilation, and carrying on Jewish tradition should be supporting Chabad organizations,” he said, “because they are the ones that keep it alive.”

Adelson long maintained a warm relationship with Rabbi Yehuda Krinsky, a personal aide of the Rebbe and chairman of Merkos L’Inyonei Chinuch—the educational arm of the Chabad-Lubavitch movement. Having grown up just a few blocks away from each other in the Dorchester neighborhood in Boston, the rabbi and Sheldon had attended the same schools, and Adelson’s late older sister, Gloria, and Rabbi Krinsky’s older sister, Yocheved, were classmates at Jeremiah E. Burke High School in Dorchester.

“I remember after Sheldon lost his sister, my sister and I drove to Lexington for shiva,” Krinsky recalls. “In many ways, after all these years Sheldon didn’t change: He was first and foremost a proud Jew. He never slowed down and never stopped working for the betterment of the Jewish people, for humanity and for the entire world.”

Sheldon Gary (Sholom Gedaliah) Adelson was born in Boston in 1933, growing up “so poor we couldn’t afford rags,” he’d say. He started hawking newspapers on street corners at age 12, the first of 50 businesses he would found.

In 1990, Adelson was a successful Boston-area businessman when he met a young new Chabad rabbi, Alti Bukiet, who had just established the Chabad Center of Lexington, Mass., together with his wife, Sarah.

Adelson was divorced and engaged to be married a second time to Israeli-born Miriam, a physician in whom he found a shared his love for Judaism, out-of-the box thinking, deep compassion and activist spirit.

Before the wedding—a second for both of them—in the summer of 1991, the young Rabbi Bukiet told Adelson that he wanted to give them a wedding gift, but he couldn’t refuse it. When Adelson finally agreed, Bukiet said he wanted to take Sheldon and Miriam to New York to meet the Rebbe.

“It was two weeks before the wedding,” recalls Bukiet, “and the whole way there, he kept on wondering how it could be that we were flying all the way to New York for a meeting that could last mere seconds.”

Reaching Chabad headquarters at 770 Eastern Parkway in Brooklyn, the couple-to-be and their rabbi joined the thousands who had come to receive a blessing from the Rebbe, along with a dollar to be given to charity. When their turn came, the Rebbe gave a blessing for their upcoming union and a number of dollars for charity, including one “for the family” and another to be given to charity on the day of their wedding in Israel.

Speaking in Hebrew, Miriam, who was in her 40s at the time, asked the Rebbe for a blessing for a child. “Why in the singular?” the Rebbe rejoined. “A child must be followed by at least another!” The Rebbe then handed them both dollar bills for the children yet to be born.

Adelson did not know Hebrew and could not follow the exchange. But upon hearing that the Rebbe had blessed them with children, Adelson, who was already older than 60 and had never had biological children of his own, was incredulous. “All of our friends have wished us with marital bliss and long life,” he later told Bukiet. “The Rebbe was the only one who blessed us with children.”

And so it was that Sheldon and Miriam Adelson were blessed with two children, Adam and Matan. The couple has continuously expressed their gratitude to the Rebbe for his blessing.

Adelson was a frequent participant at the Bukiet family Shabbat dinner table, and would always gratefully put on tefillin when the two would meet, staying connected for decades after they moved to Las Vegas.

‘He Gave Readily of His Fortune’

It’s not a secret that Dr. Miriam Adelson was a driving force in Adelson’s life and the inspiration behind much of his activism and largesse on behalf of Israeli and Jewish causes, as well as his contributions towards medical research and care.

Together, they supported medical research, drug-addiction treatment, Birthright Israel and many other causes, most notably Jewish education. In 2006, he gave the Yad Vashem Holocaust museum and memorial in Israel $25 million, and also created the Dr. Miriam and Sheldon G. Adelson Medical Research Foundation, which has funded hundreds of millions of dollars in groundbreaking research on treatments for cancer, neurological disorders and other diseases.

“He gave readily of his fortune to charitable causes that may literally be countless, as he expected no credit and often preferred anonymity,” she said in a statement.

And there were myriad ways for him to give. Adelson made waves when in the beginning of the coronavirus pandemic when it announced that his company would continue paying all 51,000 employees worldwide—a directive from Adelson himself.

Mike remembers a time when Adelson was butting heads with a local union, knowing he could provide his employees with more than the union could at a lower cost. As a result, an important County Commission hearing where they would be voting on items related to Adelson’s business was flooded with union organizers bussed in from throughout the area.

“I told him, ‘Sheldon, with all of your charitable giving, you can bus supporters in as well,’ ” relates Mike. “He told me, ‘Absolutely not, I don’t mix my business with my charity.’ He wasn’t looking to benefit from it.”

‘A Strong Feeling for Yiddishkeit’

Together with his wife, Sheldon Adelson set out to ensure the very survival of the Jewish people through a variety of means, ranging from bolstering Israel’s strategic strength to ensure that the next generation of young American Jews enjoy a meaningful connection to Judaism and their Jewish identity.

Adelson was a regular supporter of the National Menorah, which graces The Ellipse near the White House in Washington, D.C., organized by Rabbi Levi Shemtov of American Friends of Lubavitch (Chabad).

Speaking before a crowd of students and young professionals at Shemtov’s Chabad center, Adelson shared how he and his family celebrated Shabbat regularly, with his boys reciting Kiddush and saying the hamotzi blessing before breaking bread.

“He was a lover of Jews and Israel on a generationally exceptional level. Time and time again, I have seen how he lavished his time and attention upon strangers,” says Shemtov. “He would attend Jewish conferences and events, and there would be a stream of people who would want to meet him and share a few words with him. He was known as a tough businessman, but he listened patiently and graciously chatted with them all, and they would leave energized and uplifted.”

“The bottom line is that Sheldon was unique,” Harlig reflects. “He gave hundreds of millions to specifically Jewish causes because he had a very strong feeling for Yiddishkeit, he really did.”

It was global because it was personal, until the end. On Friday, Adelson, one of the richest and most powerful men in the world, followed 100 generations of Jews when he was laid to rest in the ancient Jewish cemetery on the Mount of Olives in Jerusalem, a Jew among his people.

Adelson was predeceased by a son. In addition to his wife, Miriam, he is survived by sons Gary, Adam and Matan, and daughters Shelley Adelson, Sivan Dumont and Yasmin Lukatz, as well as many grandchildren.