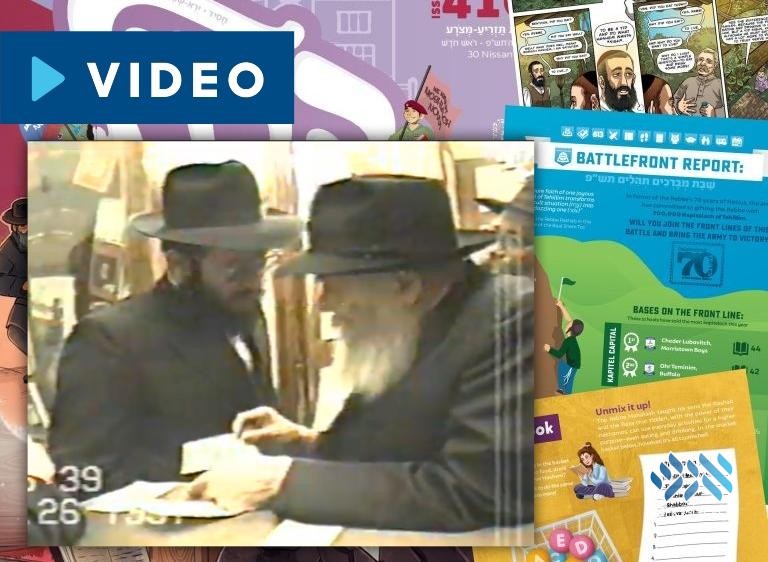 When Rabbi Yisroel Yosef Hendel of Migdal Haemek went for dollars, the Rebbe then handed him a third dollar and said, “For the children that need to be born”. Watch the video behind the miracle story published in this week’s Hachayol magazine.

On Shabbos Parshas Vayeishev 5752 the Rebbe said that the way to bring Moshiach is by publicizing miracles that Hashem does for us in our times. The Hachayol Tzivos Hashem magazine fulfills this horoah of the Rebbe with their popular “The Rebbe will find a way” section with stories of miracles of the Rebbe which are happening after Gimmel Tammuz. These stories are read out weekly at thousands of Shabbos tables each week.

Below we present this week’s amazing story together with the video of the event which is being publicized for the first time. Special thank you to Rabbi Zalman Hendel for his help in bringing the story to print:

In 5736 (1976) the Rebbe made a special announcement at a farbrengen: “I want to send a group of bochurim and newly married couples as shluchim to Eretz Yisroel. Whoever is interested should submit their names.”

Our Bubby and Zeidy eagerly applied for the job. They were surprised when, out of the many hundreds of Chassidim who had submitted their names, they were among the nineteen shluchim chosen.

Zeidy and Bubby were sent to Migdal Haemek, where Zeidy served as the shliach and rav. At that time, the Rebbe was encouraging couples to have as many children as possible. “Every child brings brachos to the family and brings Moshiach sooner!” the Rebbe said. In fact, the Rebbe encouraged every Jewish family to have its own minyan of children!

Boruch Hashem, our Bubby and Zeidy merited to have a large family, just like the Rebbe wanted. In 5751 (1991), Bubby and Zeidy were expecting their eleventh child. At that point, Bubby was already over forty years old and thought this baby would be her last. But little did she know…

Shavuos was approaching, and Zeidy was looking forward to his trip to the Rebbe. Once in Crown Heights, Zeidy went to the Rebbe to receive a dollar and ask him for a bracha. Zeidy didn’t know it then but would be the last time he’d go to the Rebbe before Gimmel Tammuz.

The Rebbe handed Zeidy the dollar and said, “Bracha vehatzlacha.” Then the Rebbe gave him a second dollar for his wife in connection with their anniversary.

The Rebbe then handed him a third dollar and said, “For the children that need to be born.” Zeidy was so surprised! After all, he hadn’t even mentioned that Bubbe was expecting.

When our great-grandmother, Mrs. Popack, heard what the Rebbe had said, she asked Bubby, “Are you having twins? The Rebbe said ‘children,’ in plural.”

But Bubby wasn’t expecting twins. What could the Rebbe be referring to? our grandparents thought.

Bubby soon gave birth to a healthy baby boy, and continued wondering about the Rebbe’s bracha. Soon enough, she would understand. In the next few years, Bubby, who was well into her forties, went on to give birth to four more healthy children—until her family reached a grand total of fifteen!

Today, the five children born from the Rebbe’s bracha feel the special zechus to have a dollar from the Rebbe, even though most of them were born after Gimmel Tammuz. The Rebbe’s words are precise and no matter when or how, they will be fulfilled. This means that when the Rebbe said our generation is the last generation of golus and the first of Geula, we can be sure that it’s true! Let’s get ready for Moshiach!

Do you have a story of the Rebbe guidance and brochos after Gimmel Tammuz to share with the readers of Hachayol? Please fill out the form at www.tzivoshashem.com/rebbestories