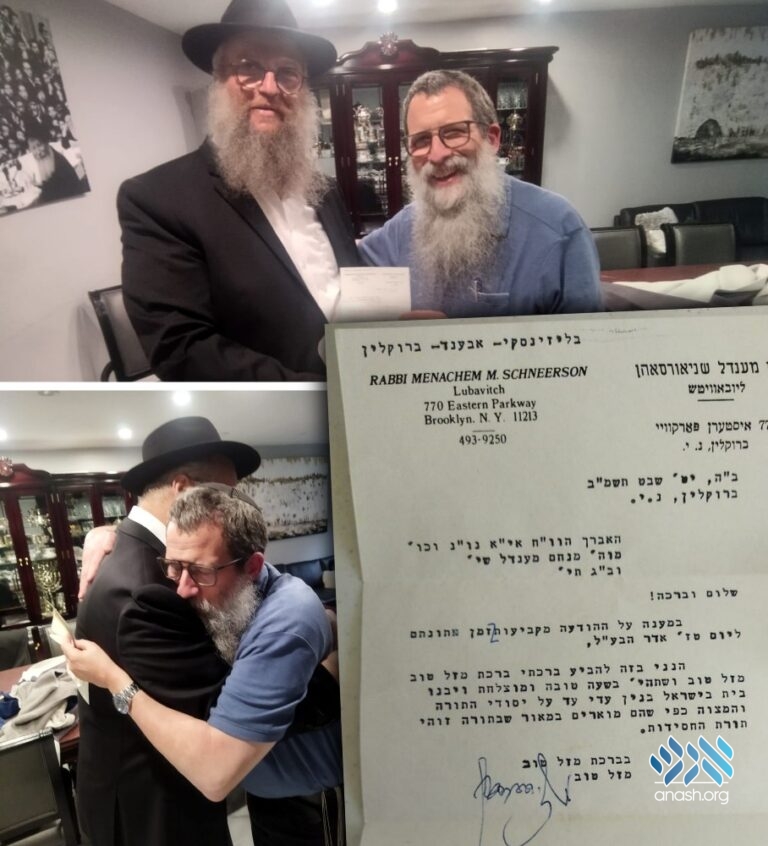 The Rebbe will find a way: Forty years after it was sent, a letter of the Rebbe continued to provide advice and inspiration to a couple close to divorce, in a series of events that left individuals across the globe open-mouthed.

The Rebbe will find a way…even forty years later.

Four decades after it was first sent, a ‘standard’ wedding letter written by the Rebbe provided advice and inspiration to a couple close to divorce, in a series of incredible occurrences that can only be described as clear hashgacha protis.

The story began a number of years ago, when Rabbi Nachum Ehrentreu, shliach to Zaporozhye, Ukraine had been mesader kedushin at the wedding of two community members whom he had brought closer to Yiddishkeit. Both the husband and wife had left previous relationships and overcome other hardships to live a Torah life. Unfortunately, more recently, things were not going well between the couple to the point that they were considering divorce.

Upon seeing their situation, Rabbi Ehrentreu naturally told them that they should both write to the Rebbe for a bracha. The couple protested that he, as the shliach, should write instead of them. But Rabbi Erentreu convinced the couple to write on their own behalf as well.

“How will I get an answer from the Rebbe?” the husband asked.

Across the Atlantic, a seemingly unrelated occurrence was taking place.

In the Crown Heights neighborhood of Brooklyn, R’ Menachem Mendel Blizinsky was contemplating a much more minor decision: Whether to change his tallis bag.

“I had a tallis bag that my wife made for me a number of years ago, which I liked very much. It had gotten a bit weatherbeaten over time, but then again, that just lent to its cachet. Over the years, my wife kept wanting to make me a new bag, but I kept refusing,” Menachem relates. “About a year ago, she insisted that she had a new model that she wanted me to carry around, and I finally (somewhat reluctantly) agreed. I made the switch to the new bag and she put the old bag with some of her samples.”

A short while after the two events, Rabbi Ehrentreu was scheduled to take a trip to New York, where he planned on visiting the Ohel and 770, and running some errands, obtaining some of the many objects that aren’t available in Ukraine. He also intended to pick up some tallis and tefillin bags to give out to individuals who had recently pledged to start wearing them every day.

In the past, Rabbi Ehrentreu had come to Judaica Creations for various purchases or projects, and this time as well he visited. Once there, he asked if there were any old tallis or tefillin bags that they no longer needed that he could give to people who had just started putting on tefillin back home. Judaica Creations had a variety of old bags with slight imperfections which they happily agreed to give to him. Included in the bags he was given were Menachem’s old tallis and tefillin set.

As Rabbi Ehrentreu was packing up to go back to Ukraine, he realized his luggage was overweight, so he left the extra tallis bags with his son in Crown Heights. But seeing the state that Menachem’s set was in, he asked his son to place that set in shaimos in 770, instead of shlepping it halfway across the world.

On his next visit to New York, Rabbi Ehrentreu and his son packed up any items that had remained during his last visit, and the senior Ehrentreu brought them to Ukraine. Upon his arrival, he was surprised to find, that despite his clear instructions, Menachem’s old set was still among the various bags. Still convinced that it was too worn to offer to anyone he placed it in the sheimos box in his own shul.

A short while later, Rabbi Ehrentreu, who was in the process of building a mikvah, took several boxes of shaimos and buried them in the foundation of the new building, as Halacha dictates. However, one of the boxes, the box with the set of tallis and tefillin bag, was still quite empty and was left in shul.

Over the next period of time, Rabbi Ehrentreu began calling people who he wanted to gift with a set of tallis and tefillin bags, and asked them to come to his shul to pick one out. Among them was the husband from the start of the story, who was still experiencing issues in his marriage.

Once the man arrived, he looked at the various bags Judaica Creations had given Rabbi Ehrentreu, but his eye was drawn to the shaimos box that sat in the shul. He picked out Menachem Blizinsky’s old set from the box and decided that was the one he wanted. Rabbi Ehrentreu pointed out that it was worn, but the man insisted that he felt something special about that set. He decided to have the bag repaired, and began checking the pockets of the bag before doing so.

As he inspected the pockets of the tallis bag, the man found an old small envelope with a letter inside. He opened the letter, and immediately noticed that it had the unmistakable letterhead of “Rabbi Schneerson.” It was a letter sent by the Rebbe in 5742.

When he and Rabbi Ehrentreu read the letter, they discovered it was a letter for Menachem and Aliza Blizinsky on the occasion of their wedding. In the letter, the “standard” letter the Rebbe would send for all weddings, and signed with the Rebbe’s holy signature, the Rebbe wished the soon-to-be-married couple that they should build their house to be a “binyan adei ad”.

“It hit us both like a bolt of lightning – this was the answer from the Rebbe to the couple’s letter!” Rabbi Ehrentreu said.

The man shuddered, understanding that the message, written four decades ago to a couple in New York, was also meant for him.

“He immediately decided that he would do everything in his power to keep the ‘binyan adei ad‘ with his wife, for many years to come,” Rabbi Ehrentreu said.

While in Crown Heights for Gimmel Tammuz, Rabbi Ehrentreu was able to return the letter to Menachem Blizinsky. The two embraced with a warm hug and tear-filled eyes.

“What’s amazing about the story, is that I didn’t realize that I was missing this letter. I must have put it in the pocket for my daughter Rivky’s wedding on Gimmel Tammuz 5780, and forgotten to put it back in the safe,” Menachem said. “Furthermore, This letter was destined for genizah, and burial under concrete, not once, but twice!”

Yet again, the Rebbe made sure that no letter goes unanswered.